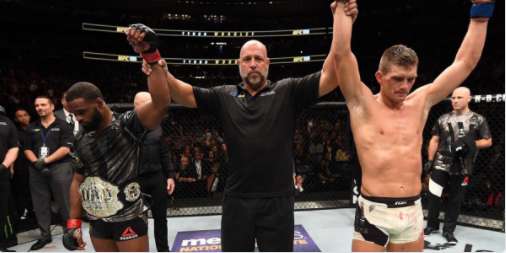 Check out our UFC 209 live coverage.

Like we mentioned yesterday during our preview for this show, it’s quite a bummer that Tony Ferguson and Khabib Nurmagomedov is off the show. But, this should still be a quality show action-wise.

We’ll be back in an hour with live play by play. See you soon.

Hunt landed a big kick but then Overeem checked one and Hunt’s foot started bleeding like crazy. Overeem was kicking his front leg, while Hunt was landing body kicks. Overeem started running like he did in the fight with Stipe Miocic and Hunt caught him with an elbow at the end of the round. The round was close with Overeem’s many front leg kicks vs Hunt’s more powerful body kicks, but I think Hunt got it based on the end.

This was a really good round for Overeem. He was patient and he was using his size and length well. Then, Hunt hit him with a big elbow and Overeem backpedaled and took a few shots up against the fence. But it wasn’t as bad as it could’ve been. Reem had him up against the fence and landed knees. Hunt landed another elbow. And another. But Overeem stayed in tight.

Overeem knocked Hunt out in vicious style. In the clinch, Overeem threw an elbow and then a knee to the head. Hunt was out at that point. On his way down, he took another knee.

Winner: Alistair Overeem by way of 3rd round TKO

Calvillo is a home girl from San Jose. Cooper is an ex-boxer.

Calvillo looked comfortable on her feet against the boxer and was quick. Cooper was patient, waiting to throw a big punch. Calvillo ended up with an anaconda choke after a cool scramble. She lost it, but got her back. She locked in the figure four around her body and then choked her out.

Winner: Cynthia Calvillo by way of 1st round submission

Evans looked good early on. He was quick and landed some nice shots. But he’s getting hit when he shouldn’t. Kelly’s punches are coming from a mile away and he’s still able to hit Rashad. Rashad looked explosive with a takedown. But he’s still getting hit far more than he should. Rashad got the round, but not impressively.

This was a weird round. Rashad had glimpses, but looked slow. Kelly just wore him down with short punches and activity. Rashad went for a takedown, got it, and then Kelly was quickly up. Kelly used a lot of trips with his front leg. The second round goes to Kelly. Rashad thumbed him in the eye.

Kelly is so sneaky with his strikes. His lead hand is almost just a decoy so he can throw his left. He has short uppercuts and short lefts. He doesn’t load up with anything, which allows him to get his hands back up. Evans had to dig deep. They had a great trade in the last 30 seconds. I think Evans snuck out that third round to win the fight.

Vannata is quick and has a varied offense. He landed a cartwheel kick and then rocked Teymur. He went for the kill, but Teymur landed two knees that hurt Vannata who had to back off. Teymur started to get the better of him and then Vannata started to be in control again. Teymur rocked him again with a big right hand, but Vannata bounced back at the end of the round. That was great stuff.

Teymur is cut from the left eye. Both guys are landing nearly everything they throw. Teymur threw a kick and Vannata caught it and then landed a reverse kick. Teymur landed a superman punch right in the mouth. Teymur got a surprise takedown. Teymur started to pour it on late to win the round. Vannata doesn’t really show any sign of being hurt, but he’s eating a lot of hard shots.

The fight is starting out slow. Thompson landed a side kick and Woodley rushed him with some ridiculous speed, but didn’t land anything. A lot of pawing and feinting from Woodley. Thompson landed a quick combination and got out of there quickly. Thompson threw a kick, Woodley caught it, and then kicked his front leg.

Woodley landed two body shots with a straight right. Thompson got two back. Woodley landed a shot to the face. And really, nothing else happened. But Thompson is going to win again because he’s controlling the octagon.

This round was right back to being super slow. Each guy would land one punch here and the other guy would answer back. No real combinations. Just one shots. Thompson landed a nice head kick late.

Woodley, knowing he probably needed to stop him, started attacking and backing Thompson up. Realistically, he should’ve been doing this in the last couple round. Thompson is doing a lot of dancing. Both guys landed a shot or two here and there. Woodley rocked him and Thompson went down. He followed up with big shots. Thompson is reeling. Woodley rocked him with another left hook. He put Thompson down twice. That could be a 10-8 round.