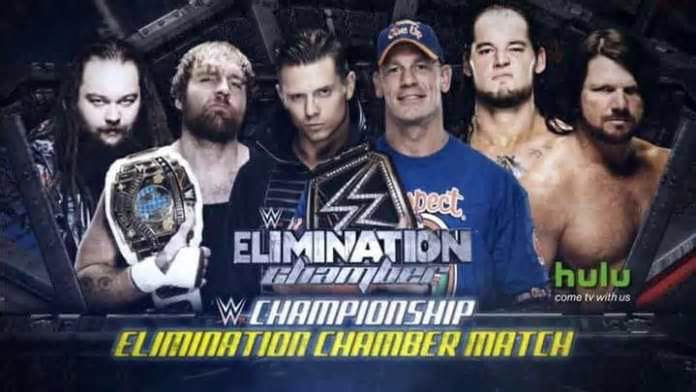 We’ll be back for live coverage of Elimination Chamber. The big match seems very well set up for Bray Wyatt to win so that he goes into WrestleMania 33 as the champion to face Randy Orton.

The Chamber usually delivers, but there’s not a lot of depth on this card. Randy Orton and Luke Harper should be fun. There are three women’s matches which all could be good if given time.

We’ll be back when the show starts.

Hawkins took most of the match until the finish. He hit the downward spiral on Rawley, but Rawley kicked out. Mojo set Hawkins in the corner and came off the rope with a big right hand. He finished him with a tilt-a-whirl powerslam move.

The new Elimination Chamber is shaped more like a ring rather than hexagonal shape of the old cage.

This was a really solid opener. James was trying to prove that she can still go with the new breed of women’s wrestling. She was on the offensive for much of it. She hit the Thesz press off the top. She then hit the Mick Kick for a two count. Becky was under the bottom rope so Mickie had to pull her in the middle of the ring and Becky kicked out.

Lynch rolled her up out of surprise in a good finish. Mickie’s offense and mannerisms were great.

Before the match started, Ziggler attacked Kalisto and threw him through the screen. It looks like he’s out of the match now.

Ziggler worked over Crews until Kalisto came back ringside. Crews hit Ziggler with an enziguri to set up the hot tag. Kalisto took over, tagged back out to Crews, and then Crews pinned him with the spinout powerbomb.

After the match, he took out Kalisto again and then Pillman’d Crews’ ankle.

The first two teams out are Heath Slater and Rhyno and Breezango. Fandango worked over Heath Slater for most of the match. The hot tag set up a Rhyno gore on Fandango.

The Vaudevillains are out next to face Slater and Rhyno. Slater pinned Aiden English quickly with an Impaler DDT.

The Usos came out next to face Slater and Rhyno. Slater got hit with the Samoan Drop, but Rhyno broke it up. They tossed Rhyno out. Slater tried a roll up, but was superkicked right in the face and was pinned.

The story of the Usos vs American Alpha wasn’t so much the match. Gable pinned one of the Usos with a fancy rollup. But the Usos destroyed them both after the match to set-up the Ascenion as the last team coming in.

Jordan took a beating, including bloodying his mouth. He hot tagged Gable in and tossed Viktor up in the air for Gable to hit his belly-to-back bridge suplex.

Natalya did a great job as a heel in this match. Her offense was believable and vicious. Nikki made a nice comeback and hit her forearm for a two count. She also hit a spinebuster. Nikki was on the top rope and Natalya hit a nice superplex. She then put Nikki in the Sharpshooter.

The match spilled outside of the ring. Nikki tried to make it in at the 9 count, but Natalya pulled her back outside for the double countout.

This was a good match that will probably now see a blowoff on Smackdown.

This match was paced well, but the crowd was bored early on. Very much on-brand for a Randy Orton match. He side suplexed Harper on the announcer’s table and he took a bump over the table and onto the floor. Crowd was disinterested with Orton being the heel.

They kicked it up a notch and the crowd got into it big time. Harper returned Orton’s side suplex on the announcer’s table. Harper hit two superkicks which Orton sold perfectly. Orton kicked out at two. Harper went for the discus clothesline, but Orton blocked it. Harper spun around the other way and Orton hit the RKO for the win. Best match of the night so far.

Naomi surprisingly beat Bliss with her split-legged moonsault off the second rope after she got her knees up when Bliss went for her splash off the top rope. She’s the new Smackdown women’s champ.

The match wasn’t quite as good as the other two women’s matches tonight, but it was good enough. Naomi was interviewed after the match and the crowd chanted at her that she deserved it. Felt like a nice moment.

AJ and Cena are starting the match. Cena had AJ down ready to do the Five Knuckle Shuffle, but the buzzer sounded and Dean Ambrose came out.

Ambrose climbed on top of his pod to give Cena his shitty standing elbow drop. Back in the ring, AJ had a waist-lock on Ambrose, but Cena snuck up behind him and launched them both with a double German suplex.

Wyatt came out fourth. He launched AJ into the steel as AJ was getting ready for his Phenomenal Forearm. Dean came off the top of the pod again and onto Wyatt, but Wyatt punched him. Wyatt, with help from Ambrose, launched AJ off the top rope high with a toss.

Baron Corbin is fifth. Corbin hit the End of Days on Styles, who is a bumping mad man, but Cena put him in the STF. Corbin got out, but Ambrose drop kicked him. Corbin was waiting for the Miz to come in and Ambrose rolled him out. Corbin is eliminated.

Corbin didn’t leave the match and ran Ambrose into the chain link fence several times before hitting the End of Days. Miz ran in and pinned Ambrose.

Miz ran wild, hitting the Skull Crushing Finale on Wyatt outside the ring. Miz came off the top rope for a high cross on Cena, but Cena rolled through, picked him up and hit him with the FU. Miz is out.

It’s Cena, Styles, and Wyatt left. Cena hit the 10 Knuckle Shuffle on both men. Styles hits the Styles Clash on Cena, but Cena kicked out at two. Styles went for the Phenomenal Forearm, but missed and Cena hit the FU on him for a two count. Cena went to the top of one of the pods and dove on both men. Wyatt hit the Sister Abigail on Cena and it’s AJ vs Bray.

AJ is selling an injury to his lower body. He hit the springboard 450 for a two count. He went for the Phenomenal Forearm again, but Wyatt caught him in the Sister Abigail for the pin.