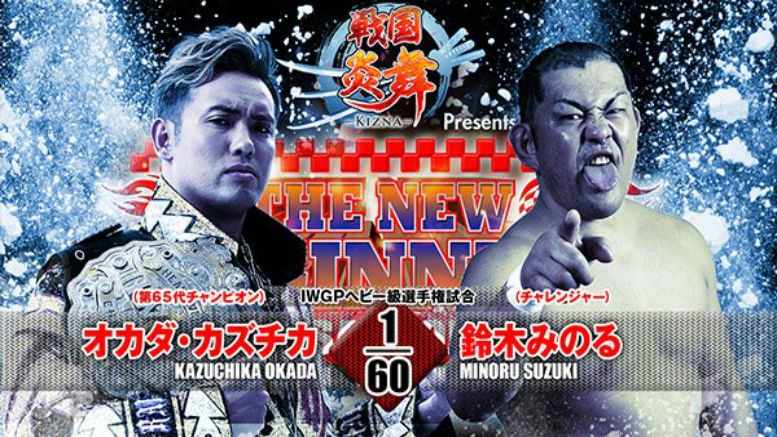 It’s the first big show since the Wrestle Kingdom show which saw Kazuchika Okada defend his title against Kenny Omega in the lauded 6 star match.

This is Don Callis’ debut with the American announcing for this show.

Kawato asked Kushida to start the match and the youngster takes an immediate beating. Kushida was back in the ring and did an O’Connor roll and then a German suplex combination. That was slick.

Kushida tagged Kawato back in the ring and he hit a missile drop kick, but started to take another beating. Desperado gave him a spinebuster and then a single leg crab. Also took a stiff spear. Desperado finished him off with a spinning powerbomb.

Kojima did a triple chop spot in the corner with all three guys and the hit the elbow from the top rope on Henare.

The match was more about the youngsters taking a beating. Henare looks super athletic. Oka looks much older than he actually is. He did some nice spots with Nagata, but succumbed to an exploder suplex and a cross face.

Gedo is wearing some very short shorts and some Jordan Is. Ospreay kept going after Shibata and dumped him out of the ring. He hit the springboard cutter on Tiger Mask for the pin.

Shibata came after him and he hit one on Shibata too.

This was certainly odd. Iizuka jumped him before the start and nearly had him counted out right as the match started. He used a rope, the mic cord, and tried to use the Iron Finger from Hell. He missed hitting Yoshi-Hashi with it, got hit with a back stabber and then with a sitdown powerbomb.

All of the babyfaces decided to hit Naito with their asses. Big Mike did his Ravishing Rick Rude impersonation before he did his.

This was a nice showcase for Elgin and Dragon Lee. Elgin did some tremendous power spots including a deadlift German suplex. Elgin tossed Naito out of the ring after he went to the top rope with Tanahashi. Then Tanahashi hit a High Fly Flow to the outside.

Back in the ring, Lee hit the Phoenix-Plex on Bushi for the win.

This is for the IWGP Jr. titles.

The match was okay, but nothing special. There was a lot of interference and even though Kevin Kelly was trying to sell hard that Taichi and Taka were going to win, it didn’t feel that way at all through the match.

Beretta pinned Taka with the Strong Zero to retain.

This is for the Never title.

I thought it was slow and boring early on, but it really picked up late thanks to both guys working strong. Robinson was throwing heavy lariats. There was a spot late where they were going toe-to-toe. Robinson threw a big left hand, but Goto ducked his head down so that Robinson hit the top of the head with his fist. Then Robinson hit a nasty lariat.

Goto dumped Robinson in the middle of the top rope. Then he hit the GTR for a two count. He put him away with another GTR.

Missed a lot of this match thanks to a technological issue with the stream. Yano used a low blow and cradle on Makabe to win the match.

This is for the IWGP Heavyweight strap.

Suzuki immediately went for Okada’s injured knee. Okada is really selling the knee, even when he’s on offense.

Action spilled outside the ring. Okada was distracted by Taichi and Suzuki went back to the knee. He hit it with a stand and then chairs. He also wrapped it around the railing.

Back in the ring, Suzuki put him in a heel hook. Okada was sitting in the corner getting stomped. Okada got a bit of a comeback and went to the top rope, but Suzuki jumped at him and he had to jump over him, hurting his knee. Suzuki went right back to the heel hook.

Back on their feet, Okada doesn’t have much on his forearms and Suzuki is mocking him. Okada went for the Tombstone, but Suzuki threw the ref in front of him and the ref went down. Taichi interfered as did Davey Boy and Archer. Okada got some adrenaline and hit his drop kick. He went to the Tombstone again and Suzuki turned it into a knee bar. Okada sold the hell out of it this time. Suzuki grapevined the knee. Okada must’ve struggled to get to the ropes for five minutes.

They started slapping each other. Suzuki went for the Gotch, but Okada reversed it into the fireman’s carry into the back breaker over his knee, but it was his bad leg. Suzuki hit a drop kick and then went for a rear naked choke. He went back to the Gotch but he couldn’t get it. Okada then hit the Rainmaker. They were both down. Okada went for it again, but Suzuki started chopping him. He hit a clothesline, but not the full Rainmaker. They reversed each other and finally Okada hit the Rainmaker for the win.