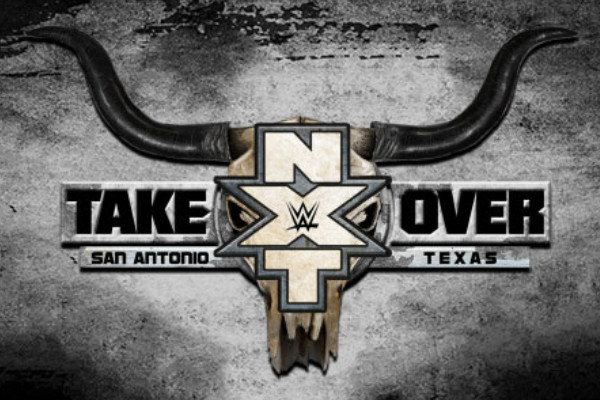 Check out our live coverage of NXT TakeOver: San Antonio.

I will admit that I haven’t seen any NXT TV since the Survivor Series so I’m not on the up and up with the storylines of NXT as I’ve been in the past. Also, is it just me, or does this NXT card seem very weak in comparison to just about every other one?

These shows always deliver, so I’m expecting it to still be good. We’ll see who decides to turn it on tonight.

Dillinger is very over as an opening match guy. Sanity’s entrance is impressive.

It’s a cat and mouse game with Dillinger trying to make sure he doesn’t get double or triple teamed. Eric Young delivered a tremendous elbow drop from the top rope. Young spent a bit too long in the tanning booth. Dillinger has a nice comeback after a long heat. Young is tossed into the corner, does a flip and runs to the top rope like he was a homeless Ric Flair, and is suplexed from the top by Dillinger. Dillinger fights off the two other Sanity members, but is clubbed by Young. He hits the Tye Breaker on Young, but Young’s foot gets pulled to the bottom rope. Young gave him a neckbreaker to win the match.

This was a good match, but maybe not as good as everyone was hoping. Almas used an armbar and then was able to pull both of Strong’s arms behind him which was cool.

Strong won with the Sick Kick which looked good. I liked Almas here, but he’s still clearly missing something.

Authors Of Pain Vs #DIY

#DIY will have their work cut out for them here to put on the kind of match that’s now expected of them. But the Authors Of Pain will give Johnny Gargano the opportunity to do what he does best, which is sell his ass off.

It’s a very nice little man vs big man match. The Authors of Pain might be selling a little too much, but it’s creating some nice hope spots for the champs. Tommaso Ciampa got the hot tag and had some nice offense, including hitting a German suplex on one of them.

The action broke down into a donnybrook. The babyfaces put both of AOP into submissions. Ciampa had one in an armbar and Gargano had the other in a crossface. Gargano was picked up and dumped on Ciampa. #DIY went for the Meeting In The Middle, but got powerbombed. AOP got Ciampa in The Last Chapter to win the titles.

Seth Rollins showed up to call out Triple H. Triple H sent out a bunch of security guards. Seth got rid of a few of them, but couldn’t escape the rest.

Nikki Cross Vs Billie Kay Vs Peyton Royce Vs Asuka

Kay and Royce took out Nikki Cross by double suplexing her onto a table near the announcer’s desk taking her out of the match. They then double teamed Asuka, creating a couple of dramatic opportunities for Asuka to kick out and come back.

Asuka finally pinned Royce and kicking her and Kay’s heads off.

It was a nice coming out party for Kay and Royce and they didn’t screw anything up. They did a nice job considering most of the match had to do with them as a team.

Lots of stalling early on with Nakamura trying to lock up and Roode ducking under the top rope for the break.

There was a lot of drama in this match and the crowd ate it up. Nakamura had Roode on the apron and did the Kinshasa and then fell to the floor holding his knee.

This affected his ability to pull that move off at the end of the match. Roode played possum and rolled Nakamura up for a two count. Roode also had a pin and three count, but had his feet on the ropes and the referee caught him.

He finally hit the Kinshasa inside the ring, but couldn’t cover him. Roode took offense, finally hitting his second impaler DDT for the win.