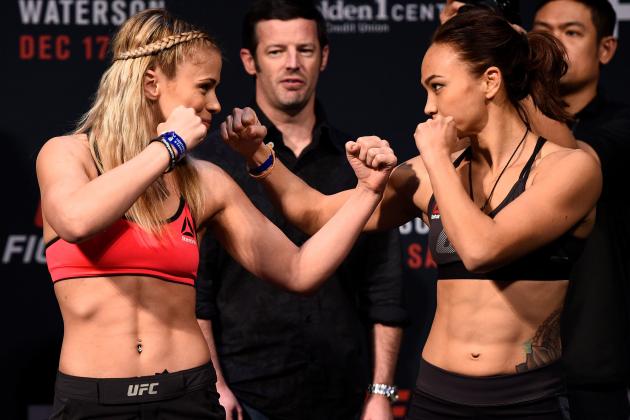 Follow our UFC on Fox Live Coverage: VanZant Vs Waterson.

The UFC is bringing the Paige and Sage show back, but this time on the last UFC on Fox show of the season. Based solely on star power, this feels much more like a Fight Night card (or even a Fight Pass card), with the exception of Urijah Faber’s retirement. Oddly, at least on television, it’s not marketed like that. It’s marketed on Paige VanZant and to a lesser extent, Sage Northcutt.

If this show does any sort of solid number, it shows that PVZ may have something with the casual fight fan. If not, it probably means that they’re going to need to load Fox shows with better fights. It’s a true experiment for them.

This one should be a banger.

Jouban disarmed Perry in the first round. Perry walked into kicks early and seemed frustrated at not being able to land at will. He’s using his length with his kicks to keep Perry at bay. Perry tried to get inside with a head kick and he did land a right hand. Perry tried to walk him down late but couldn’t put anything together.

Jouban dropped him late in the first round with a left hand, which gave him the round. He may have gotten it anyway. Perry chased him and could t catch him all round. Jouban would land a kick here and there, but more importantly, Perry couldn’t land anything of note.

Perry seemed a little shell shocked after the knockdown. He stalked him, had him up against the cage a few times, but he simply couldn’t pull the trigger. Perry knew he couldn’t do anything and just shrugged as the fight was over.

Faber’s using his quickness and is surprising Pickett with his punches. He has some snap to them. Pickett landed a low kick to the calf. Faber grabbed a single leg and had Pickett hopping. Getting up, Faber dropped him with a stiff left hook and Pickett fought the rest of the fight just surviving on his back. Faber went for a rear naked choke and also ended up on top dropping elbows. Big round for Faber.

Pickett is having a hard time keeping Faber from controlling the cage. He threw a knee that Faber caught and Faber immediately tripped him down. Faber got him again and immediately went for the guillotine, but Pickett fought it off. Faber’s round again.

Pickett got a knockdown when he landed a nice shot while Faber was on one leg, but otherwise, it was all Faber with his wrestling and his submission attempts. Pickett couldn’t keep him off.

Gall got an early and impressive takedown and Northcutt seemed pretty helpless on the ground. Gall tried to advance and Northcutt quickly tried to slip out. Gall advanced into a guillotine. When Northcutt finally got out, they started talking trash to each other. Gall got another takedown to win the round.

Gall’s standup is nearly as pedestrian as Sage’s ground game. Sage was landing big shots and Gall was winging punches without looking. One of those landed and Sage went down. Gall followed up on the ground and Sage tapped from a rear naked choke.

Winner: Mickey Gall by way of 2nd round submission

Waters on made PVZ look like a novice. Paige looked soft and tired, possibly because of a hard weight cut. Waterson judo flipped her and immediately went for a rear naked. Paige fought it off for as long as possible, but was turning purple and nearly went to sleep before it was stopped.

Winner: Michelle Waterson by way of 1st round submission