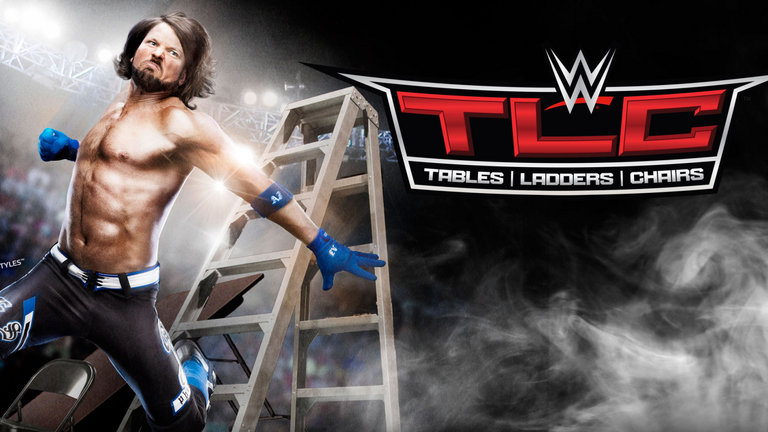 Check out our TLC live coverage.

After Friday’s ridiculous ROH: Final Battle PPV on Friday, I’m not sure if I’m ready for another major wrestling card with tons of stunts and plunder. I imagine there will be more selling on this show.

AJ Styles and Dean Ambrose should have a great match with tables, ladders, and chairs available to them. Dolph Ziggler and the Miz should as well in their ladder match. After that, I’m not sure what else is going to be all that good. Becky Lynch and Alexa Bliss could’ve had an interesting match, but I think the tables stipulation may hurt it. Nikki Bella and Carmella should have decent heat, but then they actually have to have a match.

We’ll have live play by play once the show starts.

There was a whacky 10-man tag on the pre-show where Apollo Crews, American Alpha and The Hype Bros beat Curt Hawkins, The Ascension and The Vaudevillains.

Randy Orton and Bray Wyatt Vs Heath Slater and Rhyno

This match wasn’t quite the squash I was hoping for, but I guess it was good enough. It’s hard to take Heath Slater on the same level as Randy Orton and Bray Wyatt.

It seems like the gimmick for the Wyatts is that they’ll all sacrifice for each other, especially for Bray. Rhyno was about to attack Bray, but Orton pushed him out of the way. Then Orton was about to take a gore outside the ring and Luke Harper pushed him out of the way and took it. That enabled Orton, who was the legal man, to hit the RKO on on Rhyno for the win. Bray was in his crab walk pose before Orton hit the RKO and covered him. So it seems that they’re not on the same page.

After Luke Harper gave the titles to both Orton and Bray, they both gave them back for him to hold.

Carmella is sporting a shiner from their angle on Smackdown.

This was fairly violent, with the entire setup being that Nikki thinks she got her revenge on the person who she thinks attacked her at Survivor Series, but in fact, she didn’t, because Carmella wasn’t who attacked her.

There was a kendo stick and a fire extinguisher involved, leading up to Nikki finishing her off with the Rack Attack. Similar to how I feel with Sasha Banks takes big bumps, it’s hard to watch Carmella take big bumps because of the way her body bends when she takes them.

The Miz Vs Dolph Ziggler

This was a slower ladder match than most, but I think it was okay. With a second match tonight where a ladder will be involved, you can’t have high spot after high spot after high spot. I mean, this isn’t ROH Final Battle. There was some decent psychology involved in that Miz was trying to slow Ziggler down, using the ladder to trap him in the corner. He hit drop kicks on Ziggler in the corner with him trapped between the ladder and the corner.

Ziggler’s overselling kind of hurts the believability of a lot of it, but that’s just his style. Miz started working over the left leg and then smartly also started working over the right leg. If both legs are hurting, it would be hard to climb. Miz then wrapped Ziggler’s leg around one of the rungs of the ladder, which was on the ground, and then put on the Figure Four, which was cool.

Ziggler tried for the superkick, but couldn’t do it. And then Miz gave him the Skull Crushing Finale, which was supposed to be on the ladder, but missed. Miz got all the way up the ladder and grabbed the thing that the title is hanging from. So, he was hanging in the air with no ladder like he was Jeff Hardy. Ziggler banged him with the ladder and he fell and held his knee. His knee was good enough for him to slingshot powerbomb Ziggler onto a perched ladder.

Late in the match, Ziggler was climbing up, Miz kicked him low twice and then Miz pulled the belt down and won the match.

For some reason, this is a chairs match.

Kalisto did a nice dive outside the ring, using the chair to help him springboard himself. Corbin started to bully the little guy and set up six chairs like they were about to play musical chairs. One assumes the chairs will play into the finish. Actually, it didn’t. Instead, Kalisto dove from the top rope onto Corbin who fell backward onto the chairs.

Kalisto got a lot of the match, but it ended like you’d think, with Corbin hitting the End of Days on Kalisto on top of a bunch of chairs.

This was a bad match.

They were setting up a table spot outside the ring and it took forever to get there. They teased it early on with Becky trying to suplex Bliss from inside the ring to the outside. They used a table perched on top of the bottom rope in a spot where Becky ran Alexa into it. But Alexa DDT’d her onto it, which had to hurt her too as it was turned over and the rails were exposed.

Finally, Alexa powerbombed Lynch threw the same table that was outside. Lynch’s selling was awful, they weren’t always on the same page, and there was one spot where Bliss started throwing punches to her on the ground and she missed the first few by feet, not inches.

They’re definitely going all out here.

AJ was sitting on the barricade and Ambrose ran with a chair and hit him with it. I’m not sure how close to the face it was, but it looked good. Styles took a good bump when Ambrose catapulted Styles onto a ladder that was leaning against the top rope. Styles jumped on the ladder and then took the bump over the top rope. Ambrose then tossed the ladder at him.

AJ’s doing his best to make Ambrose look like a million bucks. He’s bumping like a madman. He nearly dove over the top rope when Ambrose ducked his charge. Ambrose put him on the announcer’s table and dove from on top of a ladder and threw AJ and the table.

Best spot of the match was AJ doing a 450 springboard onto Ambrose who was on a table outside the ring. I really wish that was the finish.

GREATEST OF ALL TIME!!!! pic.twitter.com/zBtiFtENIJ

The actual finish was James Ellsworth coming down to ringside to interfere. He and AJ got tangled up which let Ambrose climb up. Ellsworth turned on Dean and pushed the ladder down. Dean took a bump all the way to the floor threw two tables. It looked great. Ellsworth told AJ to come into the ring and climb up and AJ retained his title.