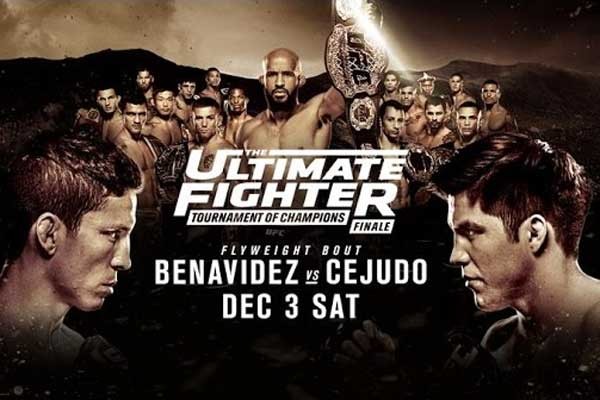 I’ll admit to not watching this season of TUF. But this card seemed a bit too good to pass up. You not only get Demetrious Johnson facing Tim Elliott, but you also get the battle of the coaches between Henry Cejudo and Joseph Benavidez.

Benoit threw a head kick that amazingly didn’t connect and Moreno tripped him up and pushed him against the cage. Benoit was throwing punches and kicks with ferocity. He landed a body kick that woke up Moreno and Moreno started throwing crazy shots. Benoit got clipped late in the round.

Benoit threw a nasty left hook that put Moreno down. He was right back up, but he looks shaken. Moreno landed a hook but ate a hook back and he was worse for the ware. Moreno picked him up for a big slam takedown, and then had another one near the end of the round. He needed to get away from Benoit’s power.

These guys are pretty tired. Benoit is winging shots and Moreno is winging them back. Benoit threw a right hand so hard that he fell into one of the corners of the octagon. Morenos’ wrestling will probably win the fight for him. As hard as Benoit hit, it’s the misses that were more memorable. Moreno could see them coming.

Davis looks soft in the midsection, but to be fair to her, she’s just come from having a baby. McMann’s throwing hard, straight punches. McMann looks more muscular than she’s been. McMann got a takedown, but it worked against her as Davis was able to get her in a triangle position and elbowed her a bunch of times before the round was over.

They were back on the ground after a big trip takedown, but Davis had McMann all out of whack on the ground. But McMann’s strength soon took over and she bullied her into a head and arm choke and Davis had to tap out.

Winner: Sara McMann by way of 2nd round submission

Cutelaba walked over to Cannonier during his introduction and did the throat slash gesture. And then he offered his fist for the fist tap! And Cannonier did it!

Both of these guys look enormous for light heavyweight. Cutelaba looks like a NFL tight end. Cutelaba got a takedown, but Cannonier got up. Cannonier got double underhooks, but Cutelaba tossed him again, nearly putting him in mount. As Cannonier started to get up, Cutelaba threw a vicious leg kick that if it had landed, might’ve ended Cannonier’s life. Brutal stuff.

The guys are fairly tired, but Cutelaba more than Cannonier. Cannonier is doing the stalking and throwing big punches with Cutelaba retreating. Cutelaba goes for the takedown, but can’t get it. Cannonier starts mocking Cutelaba, trying to get him to throw some punches and keeps his hands down. He was walking him down with his hands down. Cutelaba didn’t want any of it, landing only a backfist that Cannonier ate and continued to move forward. Cannonier landed a couple punches late.

In all the main fights thus far, all the fighters have come out banging. Ellenberger landed a big shot at Masvidal told him to bring it. And then Masvidal brought it. He got Ellenberger against the cage, knocked him to his knees, and it looked like it was going to be stopped. Ellenberger found his composure and got back up. Ellenberger rushed Masvidal after he didn’t get a takedown. But he was off-balanced and fell awkwardly. His foot got stuck between the mat and the cage. Herb Dean called a stoppage, but I’m not sure why. It’s going to go down as a TKO win for Masvidal, even though Ellenberger was defending himself and then got his foot out. Weird.

Cejudo has an advantage in the power department and he showed it, blasting Benavidez. It was a bad camera angle, so I couldn’t tell much about the shot. Cejudo went to finish with knees, but Benavidez recovered quickly. Cejudo kicked him low and Benavidez got time to recover. The referee says that it was accidental, but if it happens again, he’ll take a point away. It happened again and he took a point. Cejudo, seemingly fired up from losing the point, is throwing punches with knockout intentions. Benavidez has landed stuff here and there, but nothing big. They conked heads accidentally. Cejudo tripped him down. Back up, Benavidez feinted and landed a knee. Benavidez threw a kick and Cejudo caught it, but it still caught him. He went for the takedown, but didn’t get it.

Benavidez seems to have timed Cejudo. Cejudo is still leading the exchanges, but not landing and taking shots back. Benavidez isn’t hurting him, but he’s clearly outlanding him. Cejudo was somewhat anxious, maybe because of the point deduction and it was putting him in bad situations and Benavidez was able to land nice combinations.

This round is fairly close. Benavidez is still craftier, but he’s lunging more, allowing Cejudo to land more. He’s missing the more powerful shots. It started to get crazy near the end. They conked heads again. Benavidez almost put his head in a bad spot, but the counter shots weren’t there for Cejudo. Benavidez had the better combinations, especially late, and I think he wins the fight.

Elliott’s weird style seems to be giving DJ some trouble early on. Elliott ended up on top in a nice exchange on the ground. He then sunk in a guillotine, followed by a D’Arce, but DJ got out. Elliott landed a left hook that dropped DJ to his knees out of a clinch. Elliott also got a takedown. He actually won the first round.

Elliott went back to his crazy stand-up style and landed a nice shot. But DJ was patient and used his well-rounded game to win the round. He got Elliott on the ground and controlled him. Elliott scrambled, ended up on the bottom again, and then finally got back up to his feet, but with DJ hanging on to him.

Surprisingly, Elliott had a decent round. I thought DJ would just start to lap him. I think DJ still won the round, but Elliott was game. DJ got good position on the ground, but Elliott got on top. He got to his feet, but DJ tried to get him back down and Elliott landed some shots to the head. Elliott did a good job on his back.

DJ went for a takedown and easily got it. He maneuvered into a rear naked choke that looked tight. Elliott might’ve played a little bit of possum and then exploded out of it. DJ got the crucifix position and started to pound him in the face. DJ worked for a straight armbar and then a kimura. Elliott fought it off well and then got right back to his feet. That was impressive.

Elliott got an early takedown. He’s going to need to finish him to win this fight. Johnson was soon on top and in side control. DJ was in control and Elliott grabbed an arm as a Hail Mary. There were some nice scrambles and he got out of it, grabbing Elliott’s arm in the process. Elliott’s going to survive the round, but for the last 20 minutes of the fight, it was all DJ.