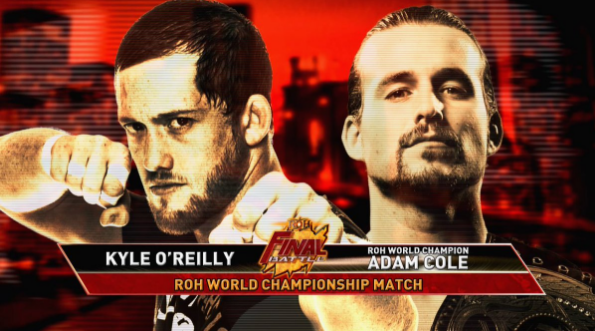 Also on the card, the Young Bucks challenge the Briscoes for their tag team titles, the six-man titles will be decided, and Cody Rhodes faces Jay Lethal.

This match. They did every single high spot you could possibly think of, trying to lead you to believe that the Guns and Dijak were going over. Dijak was doing a lot of stuff like a moonsault off the apron to the floor in which he landed on his feet to show off his athleticism I guess. The match had no rhythm or rhyme to it, but the crowd was into it.

Titus pinned Chris Sabin with a frog splash after a melody of finishers.

The Beer City Bruiser was ringside with Young.

The match had a hard time following all the high spots of the last match. Liger hit a hurricanrana from the top rope for a near fall. He also hit a brainbuster, but took too long to cover him. He then went to the top rope, Young got up, but Liger pushed him off. The Bruiser got on the apron and Liger hit him and beer exploded out of his mouth. Liger jumped off the top rope, Young got his knees up, and hit the Misery for the pin.

This wasn’t a great match, but did it’s job in showcasing Castle. Castle was able to show his strength with his suplexes, including the delayed German that was great. Colt had the Billy Goat Curse submission locked in, but Castle got to the ropes. Castle finally won with the Bang-A-Rang.

It sounds like Bobby Fish is out of the four way because of a family emergency.

Before the match started, the Addiction came out. Christopher Daniels cut a promo putting over both guys, ROH, and the crowd and said that if Cody wants to stick around, he needs to go through guys like the three of them. They’re hanging out and guest announcing.

This was a pretty fun match in which Cody turned heel at the end. They were going toe-to-toe, with Lethal trying his three topes. He got to two before Cody jumped on the apron and did a springboard dive outside where he may have hurt his elbow. The finish came when Cody sent Jay nearly into the referee. I don’t know if they were supposed to bump or not. But Rhodes didn’t follow up. The referee turned his back and Cody kicked him low and then his the Cross Rhodes for the win.

He went way heel. He cursed the fans. He attacked Lethal and then went back to the announcers and pushed Steve Corino down.

Kushida, Lio Rush, and Jay White Vs The Kingdom

This match is for the six-man straps.

The match was nuts. There were multiple dives and high spots like the first match, but the transitions were better and it actually did have some rhythm. Lio Rush was doing dive after dive through the ropes. Jay White reminds me of a young CM Punk, looks wise.

The babyfaces went on quite a run, which kind of gave away that they were probably going to lose. Matt Taven powerbombed Lio Rush with help from his buddies to win the match for the Kingdom.

Dragon Lee Vs Will Ospreay Vs Marty Scurll

Marty Scurll retained his title after locking Dragon Lee in the Chicken Wing. Will Ospreay hit Lee with the OsCutter, but Scurll tossed Ospreay out of the ring.

This match was ridiculous. Because of all of the crazy moves and transitions, there wasn’t much selling at all. The goofiest spot of the match was a chop spot where they were chopping each other in order. Lee didn’t know that they were supposed to stop chopping so he had to sell all of a sudden.

Ospreay is ridiculous in a way that I’m not sure if I enjoy watching him, but every ridiculous move he does is on point and timed well. Scurll was great and someone needs to get Dragon Lee out of Mexico.

The Briscoes Vs The Young Bucks

They marketed the match as the winner being the greatest tag team. It was crazy, but only third when it came to being a total spotfest. Imagine the Young Bucks being in the third biggest spotfest of the night rather than the first.

The finish was that the Briscoes were setting them up for the Doomsday Device. It was broken up and then the Bucks hit the Meltzer Driver for Uncle Dave. They didn’t get the pin so they had to dig deep down for the most lethal move of all-time. What was it? It was a myriad of super kicks. The Briscoes were eating them in tandem, but asked for more. Then the Bucks did about 10 in a row wicked fast and got the pin.

After the match, the lights went off and Broken Matt Hardy came on the big screen. He announced that he and Brother Nero want to challenge the Bucks.

The match was changed to no DQ.

The story of the match was Cole giving O’Reilly everything but the kitchen sink and O’Reilly taking a beating and then hulking up for more. He hit him with the belt which led to him being busted open. O’Reilly became disoriented because of the blood loss.

Cole was sitting and gave O’Reilly the middle finger and O’Reilly jumped into an armbar. Cole got to the ropes. O’Reilly sat him in a chair and gave him a trash can to hold after he hit him with it. He then ran on the apron and jumped and kicked him with both feet.

Back in the ring, O’Reilly put a table in the ring. Then he gave Cole a back suplex through the table off the top rope. They were back on the apron and O’Reilly sunk in a guillotine and fell backward with Cole’s head hitting a table just as O’Reilly’s back broke it. Cole’s was busted open.

Cole brought in thumbtacks. Cole tried to dump him on the tacks, but Cole put him in a guillotine and a triangle. Cole picked him up and dumped him on the tacks. O’Reilly gave him a brainbuster onto the tacks for a two count. Then he put the armbar on him while he had to lean back into the tacks and O’Reilly finally won. He’s the new champ.