The FGB crew has another “Reactions” piece; this time on WWE’s 205 Live.

WWE’s new cruiserweight show, 205 Live has now banked two shows in the books and I think it’s fair to take a look at the new show and how the cruiserweights in general have been handled by WWE.

We loved the Cruiserweight Classic, which was the predecessor to the cruiserweights first going to Raw and then branching off into its own show. It’s like when Joanie Loves Chachi was spun off Happy Days. Okay, no more dated references from here on out.

205 Live, or at least the idea of an all-lighter weight WWE Network show, was one of the ideas thrown around when the network was starting. They had two years to think about it. They may need a couple more. 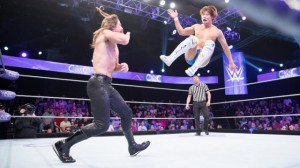 Almost everything that was great about the Cruiserweight Classic is currently missing on 205 Live. The tournament was designed as a showcase of talent, but was also a tryout of sorts. Guys who performed well during the classic were on WWE’s radar for the new division that was created on Raw. In order to get those guys over to a brand new audience, they did video packages where the guys spoke as themselves rather than doing scripted promos.

Also, the shows were taped. They had several tapings where they could make sure the matches came across as well as possible, even correcting Koba Ibushi’s mistake when he was counted out in a match he was supposed to win because he forgot that in WWE, countout is ten, not twenty. The ability to have post production is great when the idea is simply to have the best wrestling show possible.

Having the best wrestling show possible doesn’t seem as big of a deal for 205 Live. They’re going live after Smackdown which means they’re trying to keep a tired live audience for an extra hour and the lack of energy shows. The crowd popping for spectacular moves was one of the great things about the CWC and that’s absolutely missing on the new show.

It’s not working. It’s just not working. Going out in front of rapidly departing fans at the end of a long TV taping is a losing formula for almost anyone. For a group of guys who are borderline unknown in the majority of the markets WWE will tape TV in; it’s a disaster. Making matters worse, they’re both holding back the most exciting guys and also having every match wrestled in the same manner as what’s been seen on the rest of the taping. WWE’s cast of stuck-in-their-ways, job-scared yes-men better known as agents need to be kept a million miles away from these matches. The 205 Live guys should be out there without handcuffs, doing things that will make their brand stand out. That’s what we saw in the later rounds of the CWC and the results were incredible. Right now, we’re a million miles off that in terms of in-ring.

My favorite moment of the entire CWC tournament was when Brian Kendrick lost to Kota Ibushi. It was emotional and dramatic. Daniel Bryan walked out and helped create that memorable moment.

Even though the cruiserweights are now on PPV and on Raw every week, we haven’t had a moment since then that has even come close to that one. You’d think that with more opportunity that more possibility for special moments would occur. So far, it’s been less than flat.

I enjoy the show but there’s no doubt it’s lost all the spark the CWC had. It feels like a WWE C show rather than something different the way NXT is and the CWC was. It’s been set up to fail going on to burnt out crowds after Smackdown, but that’s just one in the litany of reasons the division is dying. They chose the wrong brand, the wrong roster, the wrong results, the wrong first champion. They just got it wrong. It’s been one awful decision after another and I think now even the people were really rooting for it to work have given up hope. There’s always the theory that the main event carries the brand. I think that’s one piece of the puzzle they have now corrected. I’m just not sure if it’s too late. Had they lead with Swann and Kendrick as the first cruiser weight title feud, maybe things would be different, who knows?

All is not bad though. I think Rich Swann is a better champion than either TJ Perkins or Brian Kendrick were. The video packages are back. And I do hope they bring in guys like Ibushi who aren’t signed, just to show that it’s the one TV show where you can still see surprise talent.

They probably need to change their taping schedule so that the crowd isn’t so dead watching the show and walking out near the end. Yes, I know that 205 Live is the name of the show, but maybe live can stand for almost live? I also wish they’d get rid of the gimmicky purple, but being that the belt is purple, I’m guessing that one will stick around.

Also, they need to utilize their segments on Raw to make it seem like 205 Live is a can’t miss show. Like Duan said above, it can’t feel like a C show. They don’t need the division to draw. They just need the division to be different and exciting, much like the NXT TakeOver shows are. They could give WWE fans that TakeOver feeling every week.

I don’t think they’ll be discouraged by the current reaction to the show. That might take a few more months. But they should use the show to take chances. Like Alan said, take the training wheels off and trust that these guys can put together great wrestling matches.

We’ll revisit in a couple months to see if things get better.

Brace for IMPACT: Braun Strowman expected to debut at Bound For Glory