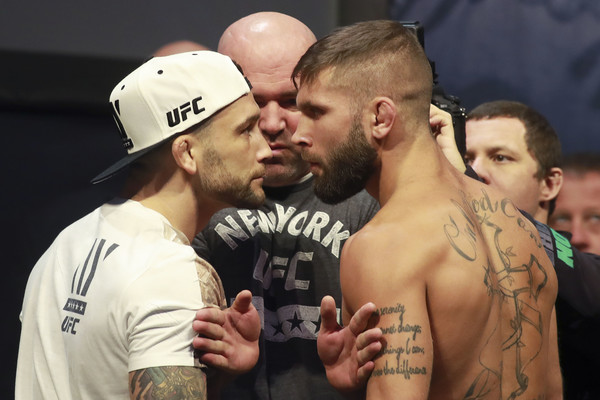 Yesterday, we gave our predictions for the biggest fights on UFC 205.

Well, that was fast. Luque knocked him down with a left hook and landed shots on the ground before the fight was stopped.

Winner: Vicente Luque by way of 1st round TKO

Winner: Tim Boetsch by way of 1st round TKO

Nurmagomedov went for the takedown early in the round and Johnson fell to his back with a guillotine, which wasn’t the best idea. Khabib Nurmagomedov had him in the little brother position and was lighting him up. Johnson got in better position (I guess), which was similar to the same position that he ended up in the last round. Johnson’s barely holding on, but unless the position changes, he’ll probably last the round. He did. He got pounded again.

Sheesh. Nurmagomedov put him down again, put his arm behind his back and sunk in a deep kimura for the submission.

Winner: Khabib Nurmagomedov by way of 3rd round submission

Edgar won the round in close fashion. He outboxed him and stayed away from Stephens’ power.

Stephens caught him with some power shots and a big kick and Edgar looked like he had to adjust to it. He was wobbly. He weathered a little bit of a storm and then got a takedown. He sunk in one guillotine and then set up a second right as the bell sounded.

Edgar went for the takedown again and got it. Stephens tried to put him in a kimura, but didn’t have it. Edgar was working for a rear naked choke. Stephens is going for the haymakers and Edgar is staying in the pocket firing back 1-2s. This was a really good fight. I think Edgar is going to take it.