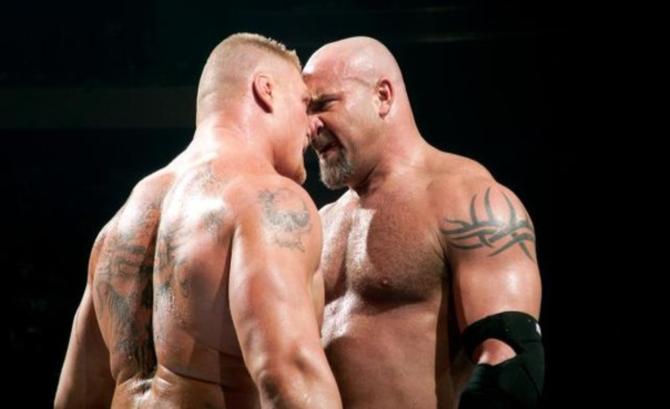 Remembering Brock Lesnar vs Goldberg I.

With Brock Lesnar and Goldberg set to square off in the marquee match at this weekend’s Survivor Series, I thought it’d be interesting to look back at the story of their first match, which was remembered more for what happened before and after the match, than the match itself.

If you remember WrestleMania XX, which was an event that WWE had been promoting once WrestleMania XIX ended, it was a huge five-hour show stemming from Madison Square Garden with five main event worthy matches. It turned out to be the Chris Benoit (and to a lesser extent Eddie Guerrero) show. It was also the return of the Dead Man, after his American Bad Ass character ran its course. And the Rock came back to help his buddy Mick Foley battle Evolution.

But the match that was promoted to be possibly the biggest of them all was Goldberg vs Brock Lesnar. The build to their program started all the way back at the 2003 Survivor Series (13 years ago to this upcoming Survivor Series) when the two crossed paths during a promo during the show. Both men were their brands’ respected champions.

They were in another segment together at the Royal Rumble. Goldberg was no longer the champ, but he was the 30th entrant in the Royal Rumble and said that he wanted a shot at the World title again. Lesnar had just beaten Hardcore Holly and thought he should be the one being interviewed by Terri Runnels.

That led to Lesnar doing an unannounced run-in during the Royal Rumble match, giving Goldberg a F-5, which led to Kurt Angle throwing him out of the match late. Goldberg said to Lesnar, “You’re next you sonuva*****.” It was on.

Goldberg joined WWE after WrestleMania XIX on a one-year deal with limited dates. Vince McMahon wanted him to work more dates after giving him that contract and Goldberg didn’t want to. I’m sure this was part of the reason why Goldberg hadn’t been back with WWE until recently.

The story that Goldberg has always told was that the Rock wanted him in the company so they could work a 3-match program. They did the first match and Rock was gone. WrestleMania XX would be the end of his contract. While some folks thought Vince would give in and re-sign Goldberg, there were others who pretty much figured that the match with Brock Lesnar would be Goldberg’s last in WWE.

Brock Lesnar lost his WWE title at No Way Out to Eddie Guerrero at the PPV right before WrestleMania. Goldberg interfered, helping Guerrero take the belt. It was the right move as Guerrero was white hot as a babyface. But I wonder if the partial reason for the belt being moved to Guerrero was because of Lesnar’s unhappiness. Lesnar stated that he’d been unhappy for six months. The travel was getting to him. He leased his own private jet to help with the travel, but it didn’t get any better.

After the fact, it was also mentioned that he saw how a lot of the guys ran themselves into the ground and walked around the locker room like zombies and he didn’t want that to be his future. After losing the title, he was set to work with the Undertaker again, being on the losing end around the horn in the Deadman’s return.

According to Brock, he told Vince McMahon two weeks before WrestleMania that he was leaving to pursue his dreams in the NFL. He also told the dressing room about a week before the big show.

In the weeks leading into WrestleMania, Goldberg was off television. I’m not 100% sure if it was because they ran out of dates with him, or the movie he was starring in, Santa’s Slay, went into production during this time.

With Goldberg out, in order to hype the match, the focus was on Steve Austin and Brock Lesnar. Austin would be the special guest referee for the match. When he was announced as the referee on Raw, it was during a segment in which McMahon was having a match with Eric Bischoff. Lesnar snuck in the ring and gave Austin the F-5. Goldberg had previously speared Austin. So as much as it was Goldberg vs Lesnar, the tease was that Austin was going to get involved. On the go-home Raw, he pretty much said that he didn’t like either man and if they touched him, he was going to feed them knuckle sandwiches.

When McMahon knew that he wasn’t going to re-sign Goldberg, I do wonder if he was thinking about building toward Austin vs Lesnar for WrestleMania 21 in LA. Not only was there a lot of attention on those two, but around the same time, Austin was saying that he possibly had one or two matches left in him. Lesnar leaving shut down that idea, but I have to believe there was something to it.

The entire go-home Smackdown was built around Austin (as the Raw Sheriff) heading to Smackdown to get his four-wheeler back. Brock stole it when he sneak F-5’d Austin. General Manager Paul Heyman had the Smackdown wrestlers in the aisle to block Austin’s entrance to the ring. He and Brock were in the ring, waiting for Austin. Each wrestler moved out of Austin’s way, allowing him to get to the ring to not only take his four-wheeler back, but to also send Brock Lesnar, in one of the biggest matches at WrestleMania, to the back, bleeding.

If you hadn’t been paying attention closely, you’d have thought that Lesnar was facing Austin instead at WrestleMania XX.

While most hardcore fans knew about Goldberg’s contract, not everyone knew that Lesnar was also leaving. I remember reading on Pro Wrestling Insiders about Lesnar maybe a day or two before the show. Dave Meltzer also had information on his website and then the full story in the Observer. But I don’t think WWE expected the entire crowd to take a dump on the match. News moved fast throughout Madison Square Garden and neither man seemed to be prepared for the crowd chanting, “You sold out!”

The match wasn’t good. There was a lot of stalling early on. They went into the test of strength and power spots before Goldberg did a press slam into a powerslam, which was impressive. But the entire middle part of the match was slow with a lot of rest holds. Jim Ross called the match pedestrian.

Goldberg finally hit a spear for a two count. Goldberg argued with Austin, which allowed Lesnar to hit the F-5 for a two count of his own. Lesnar also argued with Austin about the two count. He missed a spear on Goldberg, who then speared him, which allowed him to hit the jackhammer for the win. The crowd cheered the pinfall at first, and then got really quiet as if to say, “That’s it?”

What was a huge match going in, ended up being one of the most disappointing big matches in recent WWE history. Just over twelve years later, they have a chance to get it right.

We’ll be back with live play by play of the show on Sunday.

I read through the Figure Four Weekly’s leading up to WrestleMania to fit some of the storyline gaps that I missed by not watching the Raws and Smackdowns on the WWE Network. Man, that newsletter was funny.