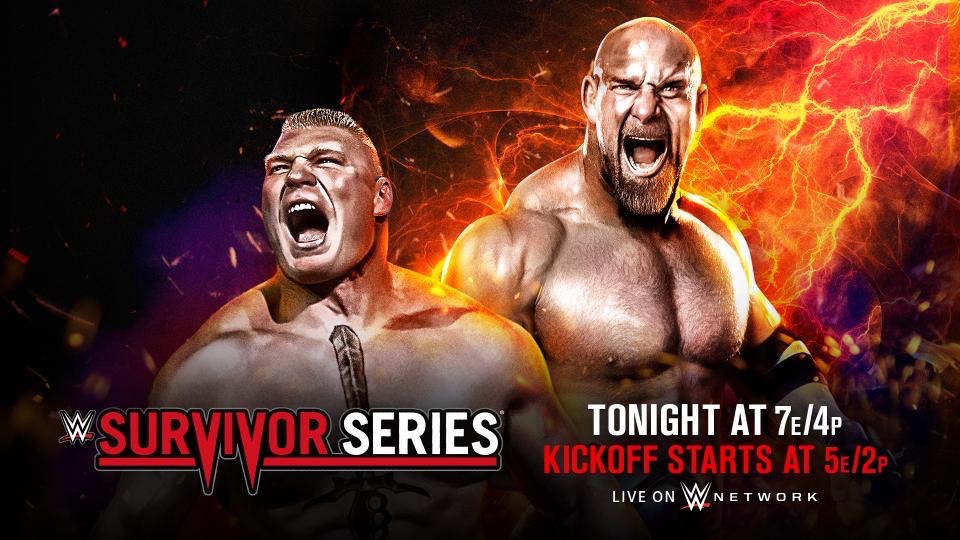 WWE has been trying hard to make Survivor Series a true big four PPV and this year is no different. With Goldberg and Lesnar headlining, this is the biggest “money” match since WrestleMania, and maybe of the year. The show is also going four hours plus more than likely, so all the elimination matches should have time. I hope someone watched the Revival vs DIY from last night.

We took a look at Goldberg and Lesnar from 2004. What a look back that was.

We’ll be back with live play by play of the big show.

Nikki Bella didn’t come out for the match as she was jumped in the back. Natalya took her place. Team Smackdown didn’t know what was going on. I wonder if Natalya jumped her own partner to get in the match.

The eliminations are coming a bit more quickly than you’d hope for a strong match, but let’s hope the final two on two is good.

Alicia Fox pinned Carmela for the first fall, but Alexa Bliss hit the Twisted Bliss on her to make it 4-4.

Naomi, who has the greatest tights ever, dove out on Jax, but Jax ran her into the ring post and Naomi was counted out. It’s 4-3 Raw.

Oddly, Sasha Banks did just about nothing offensively and was pinned by Natalya on a roll-up. Natalya ate a Charlotte kick and was pinned. It’s now 3-2 Raw.

Becky and Alexa did two bad double team moves on Jax, which led to Becky tapping her out in the Disarmer. Charlotte hit Alexa with another big boot and it’s down to 2-1 with Raw on the advantage.

Becky and Charlotte had some sequences, but Bayley broke up a pin attempt. Bayley hit the Bayley To Belly on Becky to win the match for Team Raw.

After the match, Charlotte destroyed Becky, throwing her into the barricade.

The eliminations happened too quickly and too predictably for the match to be anything but halfway decent.

The Miz Vs Sami Zayn

Zayn’s out-wrestling Miz and a step ahead of him on just about everything. They were outside and Maryse got in Zayn’s face. Zayn gave her the hand to the face, but Miz cut block him.

Miz started working on the knee, putting Zayn in the surfboard position, but just pounded both knees into the mat. Zayn is selling his knee, but still able to get in some offense, hitting a big boot. He clotheslined Miz over the top and did his dive over the top rope. He got a quick two count with a Michinoku Driver.

Zayn turned it over and got to the ropes. Miz went for the Daniel Bryan kicks but Zayn turned it into a Figure Four of his own. The bell rung, but it was Maryse, saving it for her the Miz. Zayn thought he won, but Miz rolled him up for the win.

Enzo and Big Cass, The Shining Stars, Gallows and Anderson, Sheamus and Cesaro, and New Day Vs Tyler Breeze and Fandango, the Hype Bros, the Usos, American Alpha, and Heath Slater and Rhyno

The booking of this thing sucks already. Fandango was beaten quickly by Kofi Kingston and then Kofi was beaten with a super kick. It’s already down to 4-4.

Ryder and Mojo got some offense in, but Anderson and Gallows hit the Magic Killer on Ryder and eliminated the Hype Bros.

Jordan got Primo on his shoulders and Gable came off the top rope with a bulldog, like the old Steiner Brothers finisher. It’s now 3-3.

Anderson and Gallows gave Jason Jordan the Magic Killer and it’s now 3-2 in favor of Smackdown now. Rhyno hit Gallows with a spear and pinned him. Then Cass and Enzo hit their finisher on Rhyno. Then, Jay Uso (I think) beat Enzo with a splash off the top rope.

The Usos and Cesaro and Sheamus has a nice last few minutes. Cesaro had Jey in the Sharpshooter. Jimmy went for the Superkick, but ate Sheamus Brogue Kick instead. Jey had to tapout. Raw has another win.

Kalisto Vs THE Brian Kendrick

Kalisto did a ridiculous Spanish Fly from the apron to the floor. Kendrick had Kalisto on top, had his head like he does before the Bully Choke, and then jumped with him off the top. When he landed, he had the Bully Choke in. Kalisto did a great job selling the choke.

He hit the Salida Del Sol but Kendrick got his foot on the ropes. Then, Baron Corbin interfered, causing Kalisto to get DQd.

Owens and Styles start the match. They did some nice back and forth, but the crowd started to chant “Stupid idiot,” and Owens tagged in Jericho. Jericho tagged in Rollins and Styles tagged in Ambrose.

Once Shane McMahon got tagged in, all hell broke loose. He gave Jericho some terrible punches, but then ate a drop kick and it was time to beat on Shane. Reigns and Rollins took their turn. All ten got in the ring and action spilled to the outside. Owens did a dive to the outside.

Shane went to the top, but Strowman tossed him off. Ambrose and AJ took shots at Strowman and Shane clotheslined him over the top and went with him. AJ and Ambrose started arguing. AJ hit him in the back when he wasn’t looking and Strowman powerslammed him. We have our first fall. Ambrose is out.

Strowman cleaned house, including tossing AJ over the top rope in a very scary way. Bray interfered and tried to get Strowman to turn on Team Raw. Jericho came out and said he was the captain. Strowman grabbed them both. On the outside, Orton hit the RKO on Strowman onto one of the announcer’s tables. They placed him on the other table so that Shane could jump off the top rope and hit the elbow, which he did. Finally, the ref starts counting after most of the last 10 minutes have been outside the ring. As Strowman was trying to get back in the ring, someone held his foot from under the ring. Strowman was counted out. It was James Ellsworth. Strowman chased him up the ramp, Ellsworth fell, and Strowman threw him off the ramp and through a table.

Jericho’s nose is bleeding, possibly from terrible Shane punches. Styles had Jericho ready for the Styles Clash, but Owens interfered by hitting Styles with Jericho’s list. He was DQd. Jericho picked up the list and Orton hit him with the RKO. It’s now 4-2 with Smackdown in the lead.

Shane started to run wild. He took out Rollins and Reigns, setting up the corner to corner dropkick in the corner. He jumped, but Reigns went for the Spear. Shane was shoot hurt, though, oddly got his shoulder up on the pin. The referee called it off. He either hurt his shoulder or got a concussion. Reigns looked hurt too, but he’s staying in the match.

Rollins jumped from the top to do a Frog Splash on Wyatt, but Orton hit the RKO and it’s 2-1 Smackdown.

Reigns set up the spear on Wyatt. Orton pushed Wyatt out of the way and took the spear. Wyatt hit the Sister Abigail on Reigns to win the match.

I never saw this coming.

Brock picked Goldberg up and tossed him into the corner. Goldberg pushed him and Brock fell. Brock got up and Goldberg hit a spear. He waited for Brock to get up again and hit another spear.

He waited for Brock to get up, hit the jackhammer and it was over.