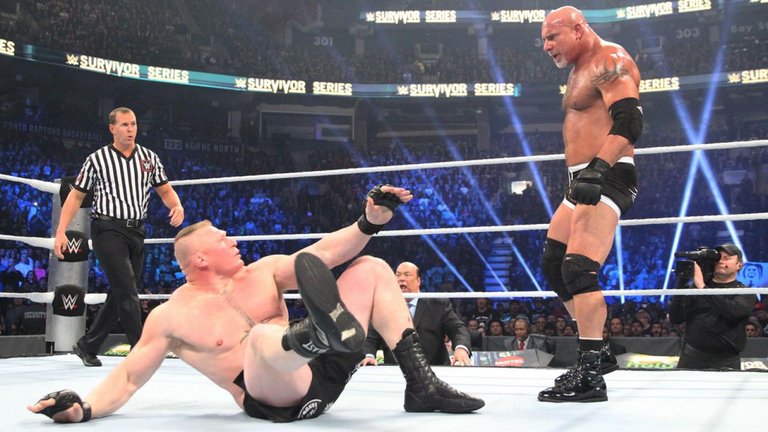 Goldberg squashes Brock Lesnar and the reactions are in.

Last weekend was quite the weekend when it came to the sports that we cover. There were two UFC shows, a Bellator show, a big boxing match, and two WWE shows. While NXT: TakeOver Toronto was a high quality wrestling show, Survivor Series was the one that everyone was talking about Monday morning.

Why? Well, unless you simply haven’t been following for the last couple of months, Goldberg was back in the ring, wrestling in the main event against Brock Lesnar at Survivor Series.

Ever since he showed up back on Raw, he’s been the biggest crowd favorite in the company. That says a lot for what television time says for pro wrestlers in the year 2016. Fantasy became reality. Well, at least as real as you can get in pro wrestling.

Goldberg and Brock Lesnar had to follow the Raw vs Smackdown men’s elimination bout, which was pillage, plunder, and all of the above. The worry was, “How could 2016 Goldberg follow that?”

There are pros and cons to having 2016 Goldberg beat Brock Lesnar, especially in the way that he did. One of the pros is the art of the shock, which WWE has enjoyed doing of late on their big shows.

The thing I found so amazing about this finish is that none of us saw it coming. It was a Goldberg match. It was Goldberg doing a Goldberg match and still not one of us predicted it. Even after the jackhammer hit, I was looking for Paul Heyman to pull the ref out. When I saw he wasn’t in position to do it, I was waiting for Brock to kick out. The three count was made and I was still expecting the match to be restarted. It must have taken somewhere between thirty seconds and a minute for the message to filter through and my jaw to hit the floor.

It was the first good surprise WWE has produced in a long time and it was fantastic. I’m excited now to see where they can go from here. It’s blown the door wide open for a bunch of fresh mega matches and that’s what they need more than anything right now. Yes, I wanted to see the Goldberg/Lesnar slobberknocker we were promised too, but we will still get that. The intrigue in seeing Bill wrestle after all this time has only been heightened by what happened on Sunday night.

A second pro is that they now have a second Brock Lesnar, but a babyface version. Add Goldberg to John Cena and Brock Lesnar as the only real draws the company has. According to Dave Meltzer on Wrestling Observer Radio, Goldberg has a specific price and if WWE wants to pay him that number, he’ll keep on wrestling. I can’t imagine that they had Goldberg beat Brock simply to have them wrestle once more.

I’m way past the point of being able to rely on WWE for well built, coherent storytelling that grips me as a fan. So if I get a couple of cool, memorable moments out of them every so often then I’ll take it. Well, Goldberg vs Brock was as cool and as memorable a moment as they’ve provided me in the last ten years. It was shocking, it had a raucous crowd reaction and it made an impact. It was a brilliant scene and if I had any faith in them with long term storytelling I’d be extremely excited about where this will go. Best I’m hoping is that Goldberg is at least kept away from their character destroying television and that when he returns for his next match it’s as exciting as his first.

They’ll need to be careful with Goldberg and not overexpose him. And only the future will tell if this was the right business decision. But what you can say is that it got people talking, some who haven’t talked about WWE in a while.