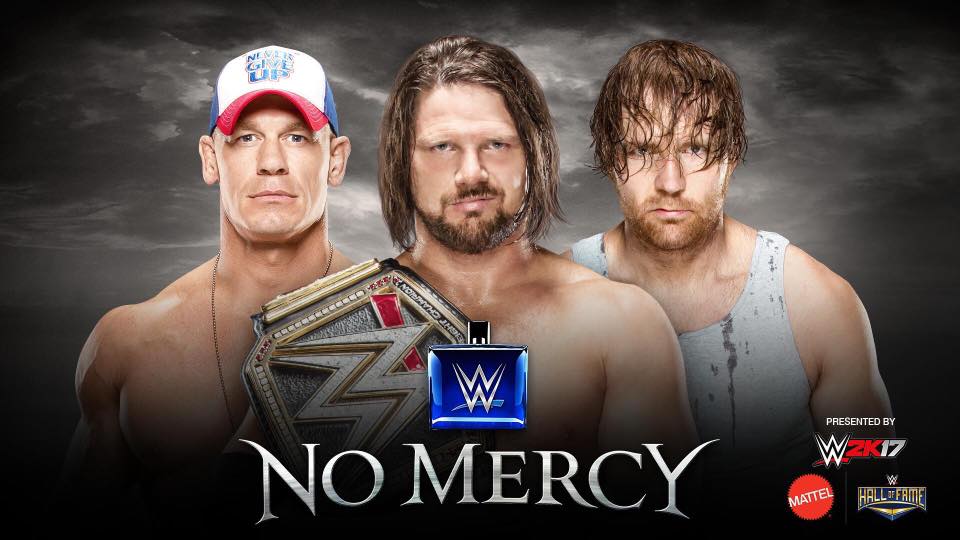 Check out our No Mercy live coverage.

WWE has touted that the main event will open up the show tonight. Considering the main event is what most want to see, it’s hard to understand why. But with the debate ongoing, plus normal Sunday Night Football, you wonder if they want to hook viewers in early, and try and keep them there. Will we see the show start with the main event which leads to them hot shotting another match at the end of the show? I can’t imagine the Miz and Dolph Ziggler ends the show.

They’re starting off hot and heavy. AJ did a dive outside the ring and turned it into his forearm. He looked like he was flying. Cena did a German on both guys as AJ held onto Ambrose and Cena came up from behind AJ. Had to be hell on his lower back. Actually, what am I saying? The guy’s a deadlift freak.

Ambrose was out of the ring and Cena went to the top to give AJ the Super AA. AJ got out of it and turned it into a torture rack power bomb of sorts. These guys are on fire.

Best babyface pop so far were the both times when his Five Knuckle Shuffle was interrupted. Best heat was when Ambrose and AJ clotheslined each other and he was able to do it to both of them at the same time. And it was the worst one ever. Cena also got a close 2 count with an AA on Ambrose.

AJ gave Cena a suplex on the side of the apron before doing a springboard 450 on Ambrose for a two count. That was awesome. Styles did the Styles Clash on Ambrose, but Cena grabbed the STFU on AJ. Ambrose wouldn’t let AJ tap and then broke it up.

AJ came off the top for a crossbody on Cena, but Cena rotated over and picked him up. But AJ turned it into the Calf Killer until Ambrose broke it up. Ambrose tried putting the same move on AJ. Then Cena put the STFU on at the same time. AJ tapped, but who won?

The match continued, but AJ pulled the referee out. Ambrose did a dive to the outside. Cena hit the AA off the middle rope on Ambrose. AJ came in with a chair and knocked Cena with a chair to the ribs and back and pinned Cena.

Nikki is wearing what looks to be her own version of John Cena’s jean shorts. Carmela is wearing some weird baggy gold pants. For someone with such a great figure, it’s a weird getup.

The match wasn’t very good, but they had the time. Carmela put the Cone of Silence submission on twice as they were teasing that Nikki’s surgically repaired neck was in harm. But she didn’t sell it at all until the match was over. Nikki hit the Rack Attack to win.

The Usos Vs Heath Slater and Rhyno

This was a solid match, though as fun as the Slater character is, I don’t think fans buy the Slater and Rhyne team as more than just midcard fodder.

The match was perfectly setup for Rhyno to clean house as the Usos beat up on Slater. At one point, which I thought was the finish, the Usos took out Slater’s knee and put him in the Tequila Sunrise. He didn’t tap. And that allowed Rhyno to hit a big clothesline before hitting the gore and getting the win.

As a match, this was nothing more than a random Smackdown TV match. But to both Corbin and Swagger, it did seem to be a little more. Swagger showed more fire in this match than he has in a long time. The match was hard-hitting and the booking made sense.

The Miz Vs Dolph Ziggler

So far, the psychology of the match is perfect. Miz is on offense and deliberately breaking Ziggler down. He did Bryan’s dropkick in the corner three times before Ziggler finally answered with a dropkick of his own. When he finally got the upperhand, Miz kicked him and then tried to cheat by putting his foot on the ropes. He pulled the tights on another pin attempt.

Miz is being dastardly, kicking at Ziggler’s knee, trying to weaken it for the figure four. He finally locked it and Ziggler fought hard to finally get to the rope. Miz pulled off the top turnbuckle after Maryse had the ref’s attention. He rushed Ziggler and Ziggler hit a leg lariat. Miz ran him into the unprotected turnbuckle and then hit the slingshot powerbomb and Ziggler kicked out at two. Miz did Bryan’s kicks, but missed the big one and Ziggler hit the Zig Zag for a close two. Ziggler had Miz in a sleeper with the hooks in and Miz reached the bottom rope.

Maryse sprayed Ziggler’s eyes again and Miz hit the Skull Crushing Finale. Ziggler blindly found the bottom rope with his leg. Miz took off Ziggler’s boot and ate a superkick with Ziggler’s unprotected foot. The Spirit Squad came out and ate superkicks. Miz hit the SCF again, but Ziggler kicked out. The ref kicked out Maryse and the Spirit Squad. Miz turned around and ate another superkick. Dolph wins. That was good.

Alexa cut a promo on Becky, who is off the show and tweeted from the hospital.

Thank you all for the thoughts. I promise I'll do everything I can to get back ASAP and defend my title… I'm watching closely tonight pic.twitter.com/SWT8QLK9r0

Alexa is the number one contender and Naomi pins her because she was the replacement. Uh, why?

You knew it was going to be slow and methodical just because it’s both of their styles. But they should’ve done something slightly differently because this crowd is dead.

Maybe they’re trying to get the crowd into it now. They were outside and Bray laid Orton down on the ring steps. He did a running senton, but missed, landing back first on the steps.

The lights went out and Luke Harper showed up inside the ring. Wyatt hit the Sister Abigail for the pin. Well, that sucked.