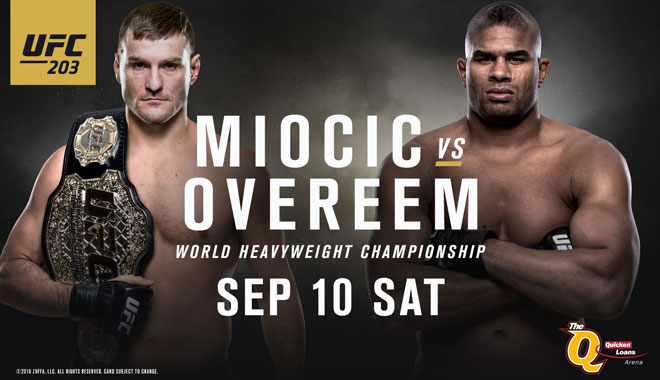 Check out our UFC 203 preview.

Even though the main event of UFC 203 features a heavyweight championship bout between new champion Stipe Miocic and challenger Alistair Overeem, the fight with the most interest is one that’s more amateurish than championship-ish.

Fox Sports 1 and the UFC put together a four-part documentary series called “The Evolution Of Punk” which showcased the lead-up to CM Punk’s fight with Mickey Gall. Even though Punk may be the single worst fighter to step into the octagon in UFC history, he brings a ton of intrigue as a former WWE wrestler, and for the UFC, hopefully a lot of eyeballs.

Alan: Mickey Gall by 1st round TKO
Having watched every episode of “Evolution Of Punk”, I have no doubts over the fact that Phil Brooks is motivated and serious about his MMA debut. This is not a stunt, it’s not a cry for attention and it’s not a Giant Silva/Bob Sapp/Akebono/James Toney style farce. I give him all the credit in the world. He’s clearly worked hard, he’s overcome obstacles, and he’s proven his toughness before ever stepping into the octagon.

All that said, I don’t think he has a hope in this fight. The one thing that became abundantly clear at the beginning of the series was that the Brazilian Jiu-Jitsu skills, which many thought would be the backbone of Punk’s repertoire, were simply not there. His grappling skills were nowhere near the realm of your average MMA fighter and his striking wasn’t in the same universe. Primitive would be a kind word. On the other hand, Mickey Gall looks like every hungry up-and-coming young fighter you’ve ever seen. He’s aggressive, explosive, and doesn’t appear overawed by the occasion at all. Perhaps, the only advantage Punk has over a young fighter like this would have been the ability to handle the pressure of the big show, and the spotlight. But Gall seems calm, cool, collected and excited for this.

I think Gall will do the business in quick fashion but Punk will be able to stand tall at the end knowing that he’s done himself very proud. But this will be his last UFC fight.

Alex: Mickey Gall by 1st round submission
Reality shows are a polarizing topic. As a consumer of Total Divas and looking forward to Total Bellas, I think the genre has some value. Though overwhelmingly, I don’t watch many of the offerings. This Saturday night, we are treated to the highest level of trash that reality TV can offer. The sport of Mixed Martial Arts has had an interesting history but the UFC currently sits as the premier company. Due to the expansion of shows, there has been a lowering of the bar for acceptable talent, but standards were kept to where it is still viewed as the top professional league. All that changes this Saturday night where a pro wrestling superstar will give you the viewer, the chance to see him fulfill his dream, and you will see this 37 year old have a fight in the UFC.

Phil Brooks (aka CM Punk) comes across as aware of why people are frustrated by his debut, but then in his next comment, he shows that he really doesn’t get it. Why would he get it? In the internal paper chase that is the fight game, there is some value in seeing a celebrity lace them up. What I find amazing is he is treated with more respect in this endeavor than another novice James Toney who at least had a fighting background. This is the most egregious scam pulled by a fight promoter; watch a guy live his dream (given a guy who is green in the sport as well) and then he’ll go back to your normal life after parting with your cash. I think that even given his newness to the sport, Gall should have an easy day.

Heidi: Fabrício Werdum
It would do Fabrício Werdum well to return to his grappling roots at UFC 203. In another tilt between two top heavyweights, I’m taking Werdum to finish Travis Browne.

I do expect Browne to come out swinging and I do, to some extent, expect Werdum to stand and trade with him. If Werdum can muscle Browne to the clinch, impose his will in close quarters, and then get the fight to the ground, I think this will be his fight. If he continues to stand in the pocket and absorb punishment from Browne, he’ll lose. I’m not saying Werdum necessarily has to submit Browne to win, but he does need to put Browne on his back.

GG: Stipe Miocic by 3rd round TKO
I don’t have a really good feel about why I think Miocic wins. As the newly crowned champ, there are several reasons pointing against him, including the curse of UFC champs losing their belts of late as well as his first title defense being in his hometown. He’s also facing a veteran of the game in Overeem, who has found the fountain of youth, all while shrinking over the last few years. Overeem has fought smart fights of late against big hitters like Junior Dos Santos and Andrei Arlovski. But I think Miocic’s pressure and work rate will eventually tire out Overeem. He’s not going to be able to withstand it after a couple rounds.

But really, how cool is it that Overeem is fighting for the heavyweight championship in 2016?