Check out our Hands Of Stone review.

Jonathan Jakubowicz’s film on the story of Roberto Duran had a nice social media buzz several months ago. I saw photos and clips on Facebook and thought there was a half decent chance that the movie could do well. I was wrong about that. It didn’t get a wide release and according to Box Office Mojo, it’s only made a shade over four-million dollars so far. That’s neither here nor there when it comes to enjoyment, but it’s clear that there wasn’t a huge demand for a movie on a boxer who was most famous in 1980.

Those of you who follow this website know that we have great love for the era in which Duran represented. My co-host Duan and I are in the process of the Fabulous Four podcast project, which analyzes the fights between Duran, Sugar Ray Leonard, Thomas Hearns, and Marvin Hagler in deep detail. So there’s a good chance that we’re going to be huge critics of the movie being that we’ve studied the era so closely. I won’t speak for Duan, but while the movie hits on some things nicely, it never really captures the essence and spirit of who Duran really was.

Edgar Ramirez plays Duran and physically, he’s an odd fit. One of the things about portrayals in general is that it’s often hard to find the right physical fit, even if the other things work. The real Roberto Duran was 5’7, fighting at 135 pounds, while Ramirez is several inches taller and much more built, probably coming in fifty pounds heavier. Not to say that Duran himself couldn’t be a ladies man, but Ramirez’s look is too pretty boy and not rugged enough. Duran was someone who looked like a serial killer in the ring, not like a model.

But being that most aren’t too worried about the physical fit like I am, it shouldn’t matter as much as how he plays Duran. For the most part, he does an okay job. He tries very hard to turn into a killer inside the ring, and outside it, during his two fights with Sugar Ray Leonard, played by Usher Raymond. But he’s simply missing that edge. Imagine if there was a movie on Mike Tyson and he simply strike fear? That’s how I felt with Ramirez’s portrayal.

(The boxing scenes are solid as Ramirez and Raymond are good athletes. Raymond has to try and mirror Leonard’s footwork. But after Creed, in which Michael B. Jordan and professional boxer had the most realistic movie boxing fight ever, the boxing scenes here fail in comparison.)

While Duran is the focus, his story is told mostly through the eyes of his Hall Of Fame trainer, Ray Arcel, played by Robert De Niro. As the story goes, Duran needed Arcel’s guidance to finally become the world champion that people thought he could become. Arcel was a Vince Lombardi-like character in boxing, gaining his reputation as a great trainer through the 1950s until he was pushed out of the fight game by the mob. The movie credits Duran’s manager Carlos Eleta with asking Arcel to help Duran after his stay away from boxing. It might not’ve exactly happened that way, but it seems that it was close enough.

De Niro’s Arcel is often the center point of the film and the Duran character often takes a step back. It’s probably for the best as Ramirez’s Duran becomes repetitive, but it does change the film. To focus the film on the better actor is smart, though I’m not sure De Niro plays Arcel better than what you’d expect from a generic, cliched, stereotypical boxing trainer. When you think of the classic trainer role, you think of Burgess Meredith (a world class stickman according to Michael Rappaport) of the Rocky films. Meredith was probably mirrored after Mike Tyson’s trainer Cus D’Amato, who was much more colorful than it seems Arcel was. But De Niro’s portrayal isn’t more than your run-of-the-mill inspirational coach without a memorable line in the bunch. 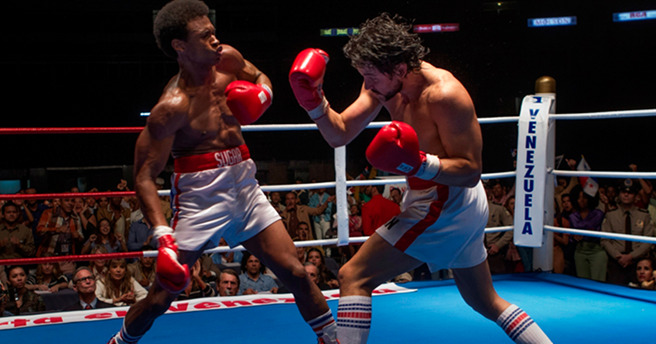 Duran’s wife is played by Ana de Armas and she looks far more like a Playboy model than she does like Felicidad Duran. For the most part, she plays the role strongly and is one of the better supporting characters. Usher’s portrayal of Leonard isn’t nuanced at all. All he does is smile, says very little, and comes across as insignificant. Never in his life has Sugar Ray been this insignificant. Surprisingly, at 37, Usher looks like a dead ringer for an early 20s Sugar Ray. He was also in great shape. But his role in Duran’s life was far more significant than just a few scenes here and there. Also, Ray was a killer himself, albeit one who did so with a smile on his face, but you couldn’t tell. Jurnee Smollett-Bell is wasted as Juanita Leonard. There’s barely a need for her at all.

Duran’s most remembered for both beating Leonard in 1980 and then losing to him in the “No Mas” fight. But that’s not where the film ends. To end it on a positive note, they chose the movie’s climax to be Duran’s comeback title fight against Davey Moore. I think that’s a fine way to end it, though, what would’ve been more powerful is to show that Duran’s comeback was an uphill battle. After losing to Leonard, the story fast-forwards three years to the fight with Moore. In between those three years, Duran wasn’t retired. He fought six times and boxing nearly left him for dead. It wasn’t until he beat Pipino Cuevas before the Moore fight that he was remembered for being the great Roberto Duran again. That up-and-down story with promotor Don King leaving him and his own Panamanian people not believing in him anymore could’ve led to a more powerful conclusion.

The best part of the movie was in showing an 8-year old Duran fighting his way to help find food for his family. The young kid who plays young Duran had a better mean streak than Ramirez did. He also threw a better right hand and uppercut.

The movie has a really solid cast, but I don’t think it tells the proper story. Watch if you wish, but it’s merely an average film, which isn’t good enough for a world class boxer.

By the way, if you want the real story on Duran and Leonard, you can listen to our first two Fabulous Four podcasts, linked below.