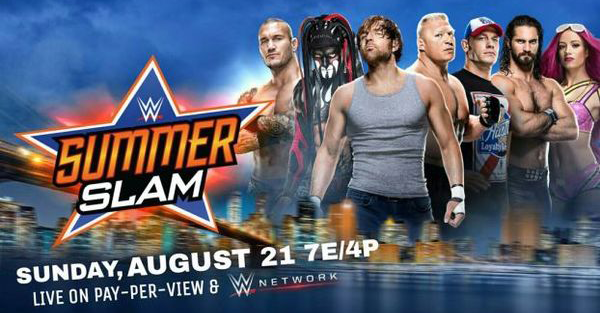 SummerSlam is upon us. If you missed last night’s NXT TakeOver: Brooklyn II show, we have a recap from last night.

As it stands now, Brock Lesnar and Randy Orton are supposed to go on last.

If you’re not too sure about this show, check out my buddy Ryan Pike’s Casual Fan’s Guide To SummerSlam.

We’ll be back with live coverage in a few hours.

This one has been a mess so far. Enzo was on offense for a lot of it early on, which means some missed spots and sloppy work. Cass threw him over the top rope onto Jericho and Owens and he threw him low, but they caught him.

It was time for Enzo to sell. He was a bit off, which made things rough. Owens hit a great frog splash, but then missed a cannon ball and Enzo tagged Big Cass. Cass hit Jericho with a big boot and then set up the Rocket Launcher, but Owens grabbed Enzo. Owens ran Cass into the ring post. Enzo hit a jumping DDT on Jericho. OWens broke it up and they set the Popup Powerbomb into the Code Breaker.

Jon Stewart was there only to show how mean Stephanie is. The New Day stole him away.

Sasha Banks’ face sure looked like she was losing tonight, which is the rumor.

This match is weird. They don’t have their normal chemistry. Charlotte carried Sasha up to the second rope and dropped her on the top turnbuckle sideways and Sasha fell on her head. Seems like she’s hurting.

They had some great and daring ideas, but the match was flat, outside of Sasha turning a Razor’s Edge from the top rope into a hurricanrana. There was something wrong with the match. Sasha could’ve been hurt early on, or they just didn’t have it.

Charlotte won after she went for a tilt-a-whirl and Sasha turned it into the Bank Statement. Charlotte fell backward and covered her for the win.

The Miz Vs Apollo Crews

The best part of the match was Maryse. She looked great.

Crews did a lot of his power stuff including tossing Miz up and catching him in a powerslam. Miz took a powder and Apollo chased him. Maryse interfered and Miz hit the skull crushing finale for the pin on poor Apollo.

The finish was that Cena went for the AA, but Styles turned into another Styles Clash, but that was only the setup for the Phenomenal Forearm and the win.

Cena left the headband that he uses for his bicep in the middle of the ring to signify something.

New Day Vs The Club

There wasn’t much to the match. It was all about the shenanigans during the finish. Gallows and Anderson hit the Magic Killer on Kofi. Jon Stewart ran in and they were setting him up to destroy his testicles. Big E ran in and they were disqualified. But at least they got to celebrate because they didn’t lose their titles.

There was very little heat for this match. No one bought that Ziggler was going to win, so none of the nearfalls worked. Ambrose was more smug than usual, kind of no-selling what Ziggler was doing. Then again, in the build up, he didn’t believe in Ziggler, so I guess that worked.

Ziggler was trying to hit the Superkick. He hit it outside and tried to get a count inside. He hit the Zig Zag for a two. Finally, he tried to hit the X Factor off the top rope, Ambrose stopped him, and hit the Dirty Deeds for the pin.

The match was pretty decent. It was slow in parts being that it was a 6-woman tag and they aren’t as quick with the spots as some of the guys can be.

The match was built to showcase Nikki, though I thought Alexa and Carmela did a good job, being it was their first PPV match.

Naomi, Becky, and Natalya were afterthoughts.

Nikki hit the TKO on Carmela to win the match.

Finn Balor won the Universal title (which looks like the other belt, but just red) by hitting the coup de grâce on Rollins after first kicking out of the Pedigree.

The match was really good, though not as good as the Styles and Cena match. It was fairly fast-paced with both guys selling. Rollins missed his Phoenix Splash late, but did hit a superplex which he then tried to roll into a Pedigree, but Balor got out of it.

This wasn’t necessarily the star making performance Balor needed, but it was good.

Rusev jumped Reigns before the bell and they went toe-to-toe outside the ring until Reigns walked to the back. It was announced that Rusev hurt his rib and couldn’t continue. As Rusev walked back to the ramp, Reigns came back and did a spear on him, which looked great.

This was better for the pacing of the show. The fans are ready for the main event.

Lesnar seems to be using safer German suplexes with Orton. He’s not throwing him very high or far. It’s more like a deadlift suplex. Brock beat Orton pillar to post, giving him 7 Germans and also putting him through the announcer’s table. Brock took him back outside and put him on the other table, but Orton hit the RKO on him. Brock crawled back toward the ring and Orton gave him the draping DDT. Brock got up and ate another RKO for a two count. Orton set up for the punt, but Brock gave him the F5, but only for a two.

Brock took off his gloves and got the mount. He threw a nasty forearm that connected and opened Orton up hardway. Orton was bleeding buckets. The match was stopped and he won by TKO.

Lesnar wouldn’t stop pounding Orton and Shane McMahon came into the ring. Brock stared through Shane and then gave him the F5.