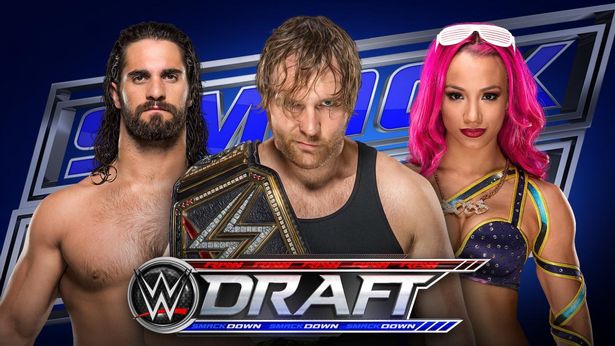 Check out or Smackdown Live report.

We don’t make a habit of live blogging Raw or Smackdown, but tonight is a special show with the WWE Draft, and thus, deserves some live blog love.

WWE has announced a rematch of last night’s Seth Rollins vs Dean Ambrose title match that ended in a draw. If you’re like me and had no idea that the finish was going to be on the Network (or found out it was a draw before you could see it), you missed it.

A #WWEChampionship rematch happens on #SmackDownLive TONIGHT at 8/7c on @USA_Network! https://t.co/2AOHYsMe1x pic.twitter.com/35d7H6mIlx

We’ll also check out the companion screen in case there’s anything interesting on the WWE Network throughout the draft. My guess is not.

Check back for our Smackdown Live report.

The show kicks off with Daniel Bryan and Shane McMahon doing Yes chants while Mick Foley and Stephanie McMahon sit behind their podium.

Foley was ready to choose the first pick and Stephanie interrupted him and said they were going to choose Seth Rollins.

With the next pick, Foley chose Charlotte. Wow. That’s a surprise. In what world is Charlotte more valuable than John Cena or AJ Styles.

Styles was Smackdown’s next pick. By the way, no one is coming out after being picked. It’s quite anticlimactic.

Congratulations @wwebalor on being drafted to #Raw on #SmackdownLive

They split the screen as they went to commercial, so we get to see Cena’s selling on a miniscule screen. On the WWE Network, even though they didn’t truly go to commercial, the panel is interviewing Charlotte.

As both guys were selling, Enzo and Big Cass as well as AJ Styles and Karl Anderson jumped on the apron. Anderson and Styles rushed them and they got dumped over the top. Cena hit the Attitude Adjustment on Gallows to get the duke.

Rusev and The Miz Vs Darren Young and Zack Ryder

Darren Young actually won this match for his team. The babyfaces started to clean up on the heels and then Backlund told Young to go for the Crossface Chicken Wing and that’s exactly what Young did. The Miz tapped wildly.

They’re going right to another match rather than doing more picks.

Wyatt put the boots to him and beat him easily with the Sister Abigail.

More terrible matches? We’re only 10 picks in. What are they waiting for?

Owens yelled at both general managers for not being picked yet. Sami Zayn came out and was promptly beat up by Owens. Owens fed him to Kane who was ready to chokeslam him. Then Kane chokeslammed them both. There was no match.

Of course, with the next pick, Stephanie chose Zayn, who was dead in the ring. Shane McMahon chose Bray Wyatt next. Foley chided the Smackdown guys for not choosing any women and then chose Sasha Banks.

Bryan said he was picking the best of the women, Becky Lynch. Foley then chose Chris Jericho.

Banks was trying to stick and move, but kept being double teamed. She dove out at Charlotte on the outside, but then was clotheslined by Brooke.

Back inside the ring, she put the Banks Statement on Brooke, but then Charlotte hit her with the Natural Selection for the pin.

All of these matches are sped-up versions and far too quick to really be good. But this was probably the of the bunch so far.

Cesaro jumped off the middle rope onto Jericho, who dropped to his back and hit the Code Breaker for the win.

There was a match that was scheduled with Becky Lynch, but when we came back from commercial, Becky and Natalya were going at it. Natalya is still undrafted.

Stephanie chose Neville with her next pick, which makes sense, since they have the cruiserweights. Bryan picks Natalya, which means her feud with Becky Lynch will continue. Foley takes Cesaro. Talk about being late on him. Shane then took Alberto Del Rio. Foley then took Sheamus.

Those are the last of the televised picks. They’ll do 30 more picks on the Network after the show.

Rollins jumped him before the bell. It was a pretty darn good match.

Seth took most of it until Ambrose’s comeback. It was almost as if they were showing why he was the top pick. Ambrose sold and sold and sold. Seth hit the superplex which he turned into another suplex attempt, but he didn’t get it and then Ambrose hit the Dirty Deeds and got the pin.

Halloween Havoc Preview: Glancing Back & Looking Ahead To Spin The Wheel, Make The Deal

Hell in a Cell Recap: This Time, It Makes Sense!