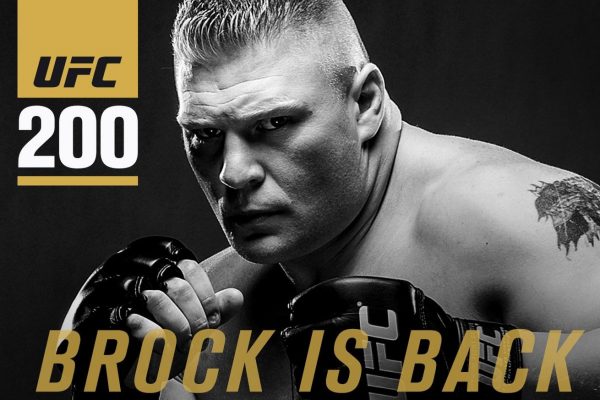 Check out our UFC 200 preview.

UFC 200 is the most well rounded up and down card in the history of the promotion. But with Jon Jones being popped for what most believe is a PED failure, the last two days have nothing short of insanity.

Even without Jon Jones, the show should be fantastic. Anderson Silva has stepped in to take on Daniel Cormier in a non-title fight. And the rest of the fights are still in tact.

Jim: Cain Velasquez by 2nd round TKO
Cain has been on the shelf for over a year and only has two fights in the last two years while nursing knee injuries and lost his last outing to Verdum. Browne has been much more active in the same time period having fought six times while also suffering a Verdum loss as well as one to Arlovski. Provided Cain’s knees allow him to make his way into the cage on fight night, I don’t think the long layoff will be a factor. From a skills perspective in my opinion, Cain has the wrestling and striking edge, but I’d give power to Browne. Browne also utilizes an unorthodox striking style with some nasty elbows that have been the undoing of a number of opponents. Cain tends to lack much head movement so it’s important he keeps his head on the inside during the clinch to avoid those big elbows. I believe he’ll do just that and drag this fight to the ground where he will dominate position and land heavy punches. It saves his legs and knees from taking a bashing from Browne’s kicks and puts him in a place where he is very comfortable and has an edge. Browne is just outclassed in this one. I don’t think this one will get out of the second round.

GG: Frankie Edgar by decision
I’m most surprised that no one in our picks took Jose Aldo. I think there are a lot of worries about Aldo, especially after his flash knockout loss to Conor McGregor last year. He’s oft-injured and was one of the main voices against the banning of IVs, which to me, means he generally has hard weight cuts. Frankie Edgar is on a bit of a roll, winning five in a row since his last lost to Aldo, which was a very close fight. I just see one guy possibly on his way down and one who is as good as he’s ever been so I’m betting safely with Edgar. But Aldo has something to prove after his loss with McGregor, and it’d be great to see him back on track.

GG: Daniel Cormier by decision
What a coup by the UFC to get Anderson Silva to replace Jon Jones. Jones, Silva, and Georges St-Pierre are probably the top 3 fighters of the last 10 years and to see Silva step in was awesome. If Silva and Cormier were the same size, I think this fight would be closer. But I think Cormier is going to rely on his wrestling and smother him to a decision victory.

By the way, how cool would it be for Silva to rock DC and make it a fight?

Alan: Mark Hunt by 1st round TKO
There has not been a single moment of Brock Lesnar’s MMA career where I wasn’t firmly rooting him on. Seeing Brock become UFC heavyweight champ was an unforgettable experience. I was so happy that day. This Saturday will be the first time I root against Brock. Not for any Brock related reasons, simply I just love Mark Hunt and the mere existence of Mark Hunt even more than I do Brock. I want to see Mark Hunt hit a giant uppercut on that giant head and calmly walk off like it was nothing. And you know what? I think that may well happen. Brock has yet to say anything which has convinced me that he’s anything other than an older version of the fighter we saw against Cain and Overeem. Those wrestling skills slow down and he’s been in a very different environment for the last 4 years. Hunt still has his power and Brock doesn’t like getting hit.

Alex: Brock Lesnar by 1st round TKO
When the Lesnar vs Hunt fight was announced, I didn’t believe Brock had much of a chance. He hasn’t done much training in the years after he ended his MMA career, and Hunt has fought only top competition since. Then I started seeing breakdowns of how it may be likely Brock will win. I must say these hooked me. It is predicated on Hunt’s foot movement compared to Brock’s speed on a double leg. I love footwork arguments, so I may be an easy sucker for this line of thought. This fight will have a a lot of drama because if Brock doesn’t hit the takedown it is almost assuredly going to be a knockout victory for Hunt.

Heidi: Amanda Nunes
If Amanda Nunes can finish in the first two rounds, this is her fight. I’ve based that choice on giving her a puncher’s chance and nothing else. Her gas tank has always been suspect and I don’t think her ground game can compete with Tate’s. But, if Miesha Tate chooses to stand and trade in the pocket with her (and I think she will), this may not end well for her. The key for Nunes is making the most of her openings and not waiting to counter.