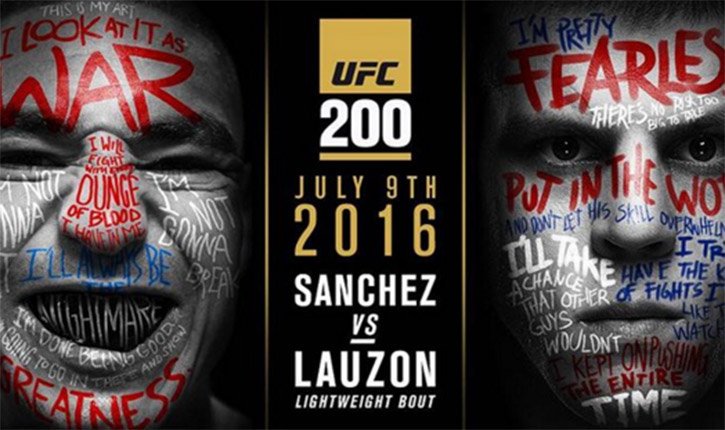 Check out our live coverage of the UFC 200 Fight Pass prelims.

We’re going to have three different posts today for UFC 200. The first will be this one, for the Fight Pass fights and then we’ll do one for the FS1 prelims, and then one for the big daddy of them all.

The mat is yell with a big Monster Energy drink logo. It’s quite weird.

Gomi looked terrible. Miller caught a kick and took him down, got his back, and pounding away at him. Gomi never really had a chance.

Winner: Jim Miller by way of 1st round TKO

Santos looks quick and landed some sneaky punches. But then Mousasi trapped him and landed a big shot that took Santos up against the cage and Mousasi unleashed tremendous punches on him. Santos turned his back toward Mousasi and Mousasi went for the choke. He pinned him up against the cage and trapped his arms and kneed him right to the solar plexus. Santos did a good job on the ground defending himself and in trying to get up Mousasi timed his uppercut perfectly and Santos was done.

This fight should’ve been stopped at least three times before the referee stopped it. Sanchez looked quick early on with body kicks and his uppercut. Lauzon was more cautious as if he was timing him. Then, all of a sudden, he jumped up on Diego and landed a myriad of punches and all of them seemingly landed. Sanchez went down, got back up, was hit in the throat, went back down, got back up and looked to be using the cage to hold himself up. Lauzon was destroying him with shots and then looked back to the referee as if to ask him to stop it. Referee didn’t, and Lauzon opened up on him again. Diego finally ran out of there, but could barely stand up. Lauzon dove in again and the referee stopped it.

Winner: Joe Lauzon by way of 1st round TKO

You can follow along with our live coverage of the FS1 prelims.