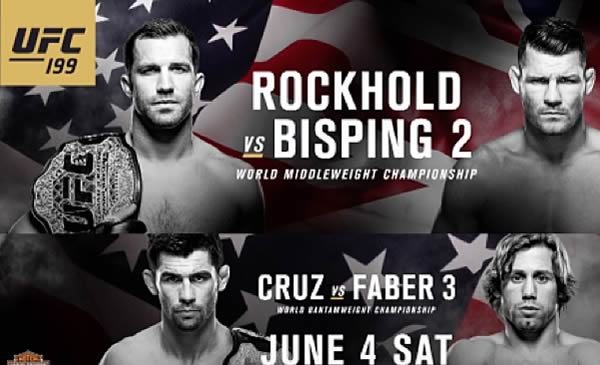 Check out our UFC 199 preview.


I wonder how much Chris Weidman being out of the main event hurts this show? At all?

Paul Fontaine has a cool study examining UFC draws and Weidman fares very well on that list. It does feel like Michael Bisping’s opportunity has made the show more interesting to a casual fan who get swept up in the great stories and drama. No matter if you love him or hate him, the fact that Bisping is finally getting his title shot after all these years is compelling.

And who doesn’t like Urijah Faber and Dominick Cruz continually hating on each other?

Alex: Dominick Cruz by decision
Urijah Faber is reliably going win any fight in dominant fashion, as long as it isn’t a title fight. It is an interesting situation, because the interest was there to see him in these title fights. Though, with time, it grew to frustrate a number of the fanbase. Now, Faber, who with age has started to slow down, faces Dominick Cruz in a title match. Cruz’s movement provides a challenge for anyone, but a slower Faber will have issues with this style. It’ll be interesting moving forward what Faber decides to do as it seems the longer he fights, it strains relationships.

GG: Dominick Cruz by decision
I would love, love, love to see Urijah Faber beat Dominick Cruz. And I really tried to sell myself on the idea that it could happen. Could he get him to the ground like he did when they looked like children years ago? Could he hit him with a surprising right hand and put him down? Can he outwrestle him?

I couldn’t talk myself to any of those things happening. But here’s where I do think he has a chance: if Dominick Cruz is intent on finishing Faber, there may be some openings for Faber. But I can’t see Cruz going off game plan. I think Cruz enjoys using his movement and just making Faber look slow. Unless he gets a wild hair up his ass, he should easily outdistance Faber.

Duan: Luke Rockhold by 3rd round TKO
I’m delighted Bisping is going to get his shot at the title before he hangs them up because I feel his story has deserved that much. Unfortunately, I think it’s coming too late and in the wrong fight. Rockhold has already once shown this is a bad match up for him, and at this advanced stage of his career, it’s unlikely Michael can change much second time around. He’s waited a career for this so expect a spirited fight, but this one is out of his reach.

Alan: Luke Rockhold by 3rd round TKO
As Duan said, Bisping deserved this. All logic says that Luke wins this fight but all logic said that GSP would beat Matt Serra in their first 2007 fight. If ever I was hoping for a similar shock upset, it’s here, but Bisping doesn’t really have the power to produce such an occurrence. A flash submission is probably out of the realm of possibility on an experience fighter like Rockhold. Realistically, I see a valiant Bisping getting stopped in Round 3 after giving his all and then hanging up the gloves.

Heidi: Luke Rockhold by 4th round TKO
Despite Rockhold’s revelation that his MCL is torn, I believe he will have developed a blue print that will give him an edge against Bisping. He’s a faster fighter than Bisping and I think that he’ll be able to make it a gritty fight if he has to to retain his belt. I’ll take Rockhold, but I believe Bisping will be able to keep this one close. I’m not sure if it’ll his the scorecards, but I do see it heading into the championship rounds. I’ll take Rockhold by fourth round TKO.