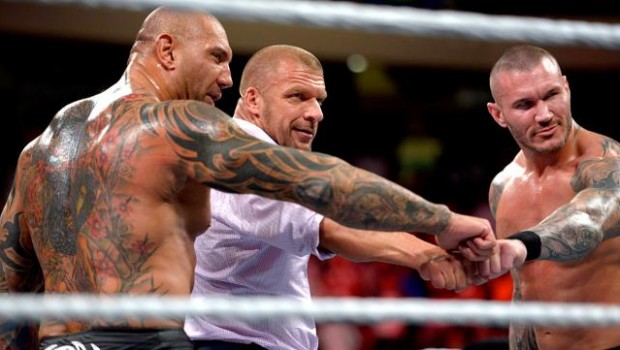 This has been a great last couple weeks for podcasts. Stone Cold Steve Austin interviewed Goldberg, who is back in the wrestling news after filming a commercial for WWE’s new 2K17 wrestling game. Jim Ross and Jim Cornette had an excellent chat after promoting an independent show that they’re both going to be a part of.

Over the weekend, we wrote about Chris Jericho’s podcast with Sandra Toffoloni, Nancy Benoit’s sister.

And now, Big Dave Bautista, who I still like to call simply Batista, has done a show with former WWE writer Alex Greenfield. It was a bit of a surprise to see Batista pop up on the wrestling scene. He’s been entrenched in Hollywood, and according to the show, recently finished shooting Guardian Of The Galaxy 2.

What’s great about this podcast is that Batista isn’t holding back. He doesn’t mince his words about how bothered he felt when Triple H and Stephanie McMahon weren’t confident in his coming back to WWE after the first Guardians was released. Talk about being in the bubble.

He also talks about his last run with WWE and what bothered him. His last run was at the apex of WWE trying to manipulate the fans and discounting their voice and unfortunately, he was right in the line of fire. He talks about why he left and it looks like the next episode (which is under MLW’s pay wall) will go into WWE’s decision to push John Cena as their number one star.