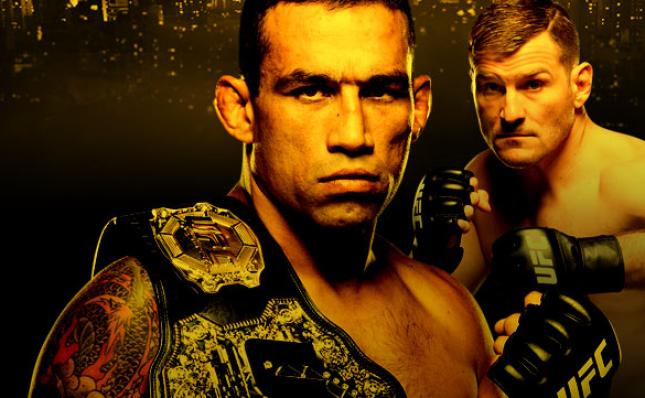 Check out our UFC 198 live coverage.

Unless injuries happen, we’re in what I’d call the UFC’s WrestleMania season. Starting tonight, everything is starting to feel important. If Conor McGregor and Nate Diaz sign on to fight each other post-UFC 200, we’re going to have four or five months of nothing but strong cards.

Tonight’s card isn’t all that well publicized and is in Brazil rather than Las Vegas, but it’s sneaky good up and down.

We’ll be back with the main event of the FS1 prelims and have the entire UFC 198 main card.

Maia’s not messing around here. He immediately went for the double leg and got Brown down. He then made Brown wear him like clothing, trying to tie him up in knots.

The round was very similar. Maia was going for the arm bar and Brown tried to turn him late.

Brown had a chance. Maia whiffed on his takedown attempt and had to deal with Brown catching him. Maia played dead a little and Brown went to the ground, but he played into Maia’s hands. Maia fought hard for the rear naked and got it late.

Winner: Demian Maia by way of 3rd round submission

Alves came out like a house on fire. He immediately went for the guillotine, but Barbarena’s arm was still in. Barbarena took a lot of kicks and punches to the body and just weathered the storm. Good round for Alves. Everything he throws is hard.

This was a great back and forth round. Both guys were landing nearly every blow. Defense was at a minimum. Barbarena was toe to toe with him in the last two rounds.

Talk about hanging in there and waiting for him to get tired. He stayed busy and hung in there. Really good fight.

Anderson fought a smart round for the most part, staying away from Shogun’s power. Neither guy really had a true advantage until super late in the round. With 10 seconds left, Anderson got flat footed and Shogun knocked him down. He hit him with hammer fists on the ground, but Anderson lasted the round.

Anderson got dropped again right at the end of round with a right hand. However, he won the round with a more varied offense including a takedown.

Anderson won the round, but he thought he won the second based on how he went about it. Very tactical. Didn’t take any chances.

It was exactly what you thought it would be. Cyborg was active with kicks and right hands. Smith was scared out of her mind and continuing to go backward. Rather than stick and move, she tried to put her chin down and swing away and got caught. Cyborg followed her to the ground and it was stopped.

Winner: Cris Cyborg by way of 1st round TKO

Smith was upset that it was stopped. She should be thankful. She had two bad shiners underneath her eyes.

Belfort didn’t come out fast and hard like I expected. Jacare was the agressor. Jacare got a takedown and landed an elbow from the top that cut the bridge of Belfort’s nose. The ref stopped it to get the cut looked at. They got back to their feet but quickly, Jacare was back on top and just pounding away from the top. Belfort took a ton of shots and it was finally stopped.

Winner: Jacare by way of 1st round TKO

Weird round – Werdum was using his reach to land, but Stipe’s fast hands were landing too. Werdum was the aggressor and for some reason started chasing him. Stipe was backpedaling and dropped a rushing Werdum with a right hand. Werdum was out.