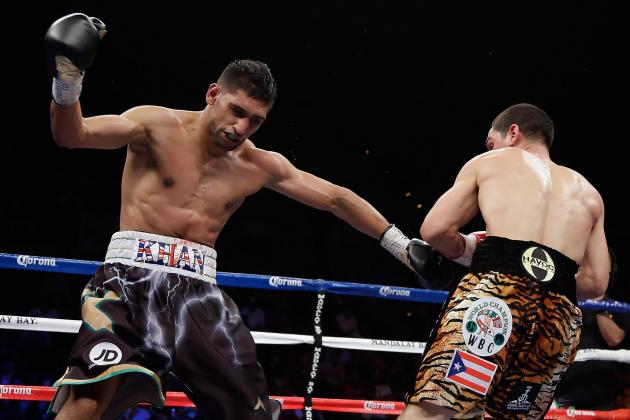 In our latest TBT video, we look at Amir Khan’s KO losses.

I think there are a few reasons why people don’t believe that Amir Khan can beat Canelo Alvarez on Saturday. The main one is because he’s going up in weight and is naturally a much smaller fighter.

But another main one is because as talented as Khan is, two of his three losses have come from being knocked out badly.

The first time he was knocked out was in September of 2008 against Breidis Prescott. It put Prescott on the map and gave him the nickname The Khanqueror. But since knocking out Khan, Prescott has gone 9-7.

Re-watching that fight, Khan buckles after a stiff jab and then crumbles under huge shots. Losing this fight immediately gave Khan the reputation of not having a great jaw, but really, it’s his defense that evades him. Prescott hit him with brutally clean shots and very few would’ve been able to stand up to those.

The second time he was knocked out is in the fight that put Danny Garcia on the map. Garcia was an up and comer like Khan was, but he wasn’t an Olympian.

It’s not just how cleanly Khan gets hit, it’s also how unsturdy he looks when he gets hit. He goes down hard and when he gets back up, he’s trying so hard to prove that he’s not hurt that it’s almost comical. Look at how unstable he is at the end of the third round after going down once against Garcia. It’s almost like he’s trying to prove that he’s not hurt at all and it causes him to be even more unbalanced.

It’s hard to imagine Khan has enough power to hurt Canelo. If he has a chance in the fight, it’s to do what Floyd Mayweather did, which is outbox and outmaneuver Canelo the entire fight. Mayweather’s patience is one of his greatest traits. He doesn’t need to prove how tough he is; only how smart.

I don’t know that Khan has a Mayweather performance in him. But I do wonder if we’ll see a repeat of one of these knockouts. Khan definitely has something to prove and trying to prove that may be his undoing.

Cup of Coffee in the Big Time: Pete Rose is a Chicken?