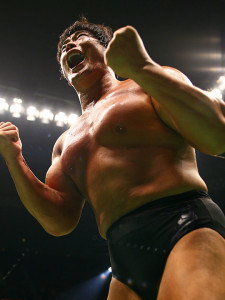 So here it is, my final ballot for what I consider the 100 greatest in-ring wrestlers of all time.

As anyone who’s been reading my blogs on this knows (Intro| Baseline|3 month update|July update|November update) I did a list of 100 roughly 16 months ago and have watched all types of wrestling in that time since, with a view to how it changes the original list. I got exposure to wrestlers I hadn’t seen much of, promotions and eras that I had barely scratched the surface on, and overall, really took a lot from this as a fan.

But as I noted in the second blog, I very quickly realized that I had no chance of covering the volume I initially envisioned. There is just so much amazing old wrestling and SOOOOOOO much amazing current wrestling ongoing. I wish I had more time to sink my teeth into World Of Sport, I wish I could have watched even more Joshi than I did, and I wish I could have re-watched all the great stuff that I loved from the 2000s US indy scene. But hey, I’m not going anywhere anytime soon, plenty of life left for all that, haha!

I won’t do another list like this for many years so that when I do it will be interesting to see how it changes. It was interesting enough seeing how it changed from the baseline list in December 2014.

One minor point I just want to clear at this juncture. I would have had Hirooki Goto on here, but for it to comply with the balloting system the guys at PWO are using, I had to leave him off (he wasn’t on the extensive nominees list). He probably would have been towards the end of the list but honestly I wouldn’t view him and my number 100 Ryo Saito as being all that far apart.

The Greatest Wrestler Ever!

Right so, it may be the least interesting slot on the list and it may be the slot I put the least thought into, but I have to acknowledge the man at the head of the table – the Greatest Wrestler Ever, Kenta Kobashi. What a performer this man is. When it comes to greatest of all time, I don’t just think of him amongst wrestlers. I think of Kenta Kobashi amongst the greatest performers of any genre there is. Musicians, actors, comedians, athletes. Kobashi is an all-time great comparable with the greatest in any of those fields. His portfolio of great matches is endless spanning his work as a rookie in the late 80s, all the way through the incredible 90s AJPW golden era and into his later years with Pro Wrestling NOAH.

I only saw this man live once, in Coventry in 2008. At that point, I had only been to a handful of live wrestling shows and he obviously blew me away. Now in 2016, I sit here having just come back from Japan where I saw 9 shows in 10 days. I’ve been to four Mania weekends, and dozens of great shows in Europe. I’ve seen a lot of incredible wrestling, but he haven’t seen anyone quite like Kobashi. He had the 3,000 fans in the Coventry Skydome eating out of the palm of his hand. It was like a God descending on the place.

The fire, the emotion, the execution and the drama of Kobashi’s matches are second to none. Even when he was broken down, he was still able to produce absorbing performances with nothing but chops and facial expressions. When he was at his peak? Man, those matches! My personal faves are the Dr. Death match in 1994, the CanAms tag in 92, the Kensuke match in 2005 and the Misawa match in 2003. But there are so many more. Just the other day I watched a tag title match from 1999 with Kobashi & Akiyama against Ogawa & Misawa and that friggin’ blew me away. I could spend the rest of my life only watching Kobashi matches and I wouldn’t get sick of them. His career is an endless treasure trove.

I don’t really know what to say about the rest of the list. They’re all pretty awesome wrestlers I guess! The list definitely favours wrestlers of the 90s and 2000s as I just think there was more of an emphasis on having great matches as time has gone on. Plus, the athleticism and motivation to push the boundaries of what’s possible in a wrestling ring has obviously increased massively as time has gone on. Plus, my stylistic preference are just more in line with the modern era. Some older guys definitely get their due though.

Riki Choshu was arguably my biggest revelation of the project. I had a completely flawed narrative in my head of his in-ring career which was formed mainly through people’s resentment of him in the very late part of his career. I knew he was over in the 80s, but I didn’t really know him as an incredible worker who had a plethora of awesome matches and feuds. After seeing his run vs Fujinami in New Japan and his work against the All Japan guys when he jumped there, it shot him high on my ballot. Top 25 for a list like this is serious. And I take Choshu pretty damn seriously as a wrestler now.

Outside of Rey, my top luchador ended up being Atlantis. He was an incredible big match worker who has almost Undertaker style performances on the big stage as he’s gotten older but unlike Taker, he backs that up with a really good early career where he was one of the most spectacular wrestlers of the time. He was a joy to watch do his thing.

Of the active wrestlers on my list, Kazuchika Okada is obviously the one most likely to rise significantly. He’s had four all-time great years and that was enough to earn him a top 50 spot for me. There is no limit for how high he might reach on this thing ten years from now (and the scary thing is he won’t even be 40!!!).

A name that didn’t make the list is actually my favourite wrestler in the world right now, Yuji Okabayashi. If he keeps going as he is, he’ll be a very high contender down the road. For now though, it’s his mentor Daisuke Sekimoto flying the BJW flag in my top 10. Since 2006 this guy has been outstanding. I would say he’s been the best wrestler of the past 10 years (Danielson is higher due to being great from 2001-2006 also). He can be nuanced, he can be spectacular and he’s shown recently that he’s a master of elevating those beneath him (Kawakami, Shinobu, Daichi Hashimoto …. many more).

Akira Hokuto is my highest woman wrestler, and that’s probably due to me watching more footage of her than anyone else. Will definitely try to balance that out in the coming years and get a more well-rounded view of the best women’s wrestlers. This project has already taken me a long way in that regard. Eighteen months ago, I wasn’t sure I even liked Japanese women’s wrestling. Now it’s one of my favourite things to go back and watch (and it provided me with the best match of my recent trip to Tokyo!).

That’s about it I guess. I’m going to be doing a couple of podcasts on the subject in the next week or so. They will undoubtedly pale in comparison to the incredible efforts of Dylan Hales, Kris Zellnar, Steven Graham and others over at the Place To Be Nation/PWO Podcast Network, but we’ll try to take a different tact with them to differentiate and make up for the fact that the shows won’t be 8.5 hours haha!!!

If anyone wants to ask me any questions re: my list, feel free to give me a shout! Would love to hear feedback.