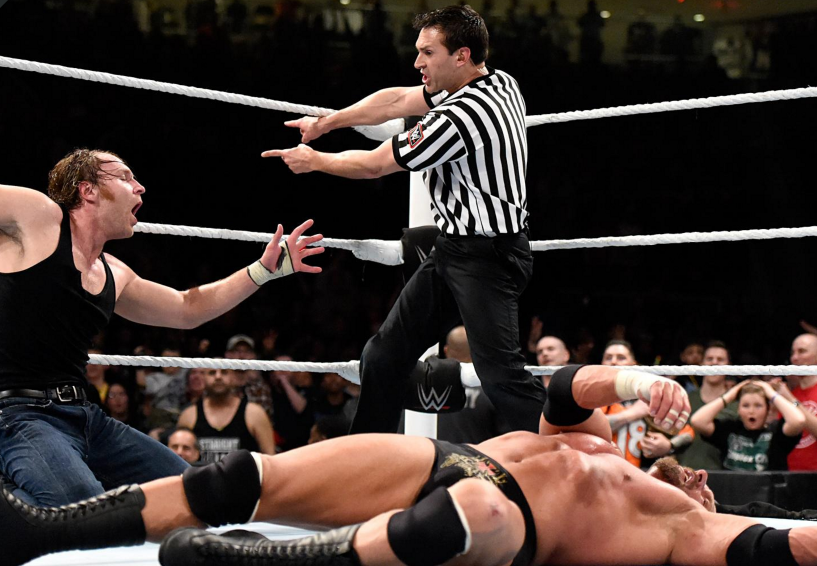 Check out our Roadblock play by play.

The New Day came out to do a promo about why the League Of Nations sucks, and it’s because they don’t eat their Booty-Os.

This was a fun opener. Barrett and Sheamus put heat on Kofi until New Day set up the hot tag. Crowd didn’t really explode like they should’ve, but it might be because the match was wrestled like both teams were still heels. Though, Kofi fought off in the end like a babyface.

Sheamus had Big E down with a slam and tagged Barrett in. Instead of the Bull Hammer, Barrett did Alberto Del Rio’s superkick with Big E on his knees. They both chased Kofi outside the ring, allowing Big E to get back on his feet and hit the Big Ending on Barrett for the pin.

Chris Jericho came out and turned on Canada and got booed. He turned the crowd quickly on him. I guess he’s facing Jack Swagger.

The crowd is chanting for AJ Styles, so Jericho did his job.

It was a little slow and clumsy near the end as they went for finishes, but overall, they told a good story. Swagger is soft bodywise. Swagger went for the Patriot Lock twice. The second time, Jericho grabbed onto the referee’s pants to help pull himself to the rope. Swagger rushed him in the corner, Jericho moved, and Swagger hit the top turnbuckle. Jericho then put him in the Walls of Jericho and Swagger tapped out.

Enzo & Big Cass Vs The Revival

This was a really fun match. I’m not sure Enzo is ever going to be a wrestler in WWE, but he’d be a great manager. Enzo sold his ass off, much like their match in London. He tagged in Cass who cleaned house, hitting big boots on both. He hit his spinning side slam finisher and tagged in Enzo for their rocket launcher-like move, but Dawson tripped him on the top rope. Cass went outside and was knocked out.

Back in the ring, Enzo fought both guys off, hitting a DDT after diving off the top rope. But then he took their Fatal Flaw finisher and was pinned.

We need to be clear about something. Natalya is Charlotte’s best opponent and it’s not close. They had the best WWE women’s match in quite some time. It was back and forth and nothing was rushed. The psychology was great and Natalya was inspired like crazy.

Late in the match, Natalya had Charlotte in the Sharpshooter and Ric tried to grab his daughter’s hands to pull her to the rope. But Natalya pulled her back into the ring. For some reason, she gave up on the hold to go after Flair. She took a swing at him and Charlotte rolled her up and put her feet on the ropes.

It was the best match on the show so far.

This turned into a handicapped match on the way to the ring. Before getting into the ring, Wyatt jumped off the apron and watched the match from afar.

Brock took him to Suplex City pretty early, but Harper got the upper hand with a couple of super kicks and a stiff clothesline. But Lesnar’s suplex attack is destroying Harper. He then hit the F5 to get the victory. Wyatt didn’t even get inside the ring.

For some reason, this was a long, drawn out match. The crowd lost interest. Zayn won with the Helluva kick.

Triple H started the match by out-wrestling Ambrose. Ambrose was frustrated because he looked dumb. But then he got a few holds over on Triple H and then resorted to pulling on his nostrils, ears, and trying to split his fingers.

The match was really slow, wrestled at Triple H’s pace. I thought it was fairly boring early, but the fans got into it in the end. Ambrose put Triple H in a figure four and the fans bought it for a second, but then he punched his way out of it. Ambrose put on a terrible Sharpshooter (which we saw before already) and Triple H struggled out of it. Ambrose hit the Dirty Deeds and got the three count, but the referee called it off because Ambrose’s feet were under the ropes on his pin attempt.

Ambrose put Triple H on the announcer’s table and perched himself on the barricade. He jumped off, but Triple H wasn’t there and he crashed and burned through the table. He barely made it back into the ring before the 10 count, but was immediately pedigreed.

While it may have been too slow early on, it was for the best. Because Dean often goes through his moveset too much, the slow pace made it so that all his moves meant something in the end.