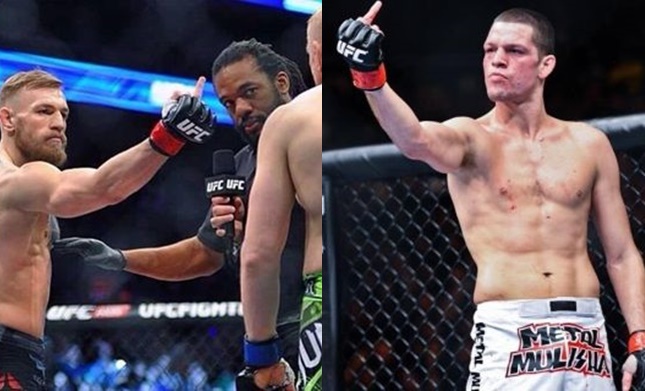 Check out our UFC 196 preview.

You can see for yourself here:

Heidi: Holly Holm
Miesha Tate is a good wrestler and Holm is an exceptional striker. The question is: If Miesha can get Holm to the ground, can she keep her there? Holm will likely come in looking to pick Tate apart using kicks and body shots to wear down Tate. If she keeps her at a distance, getting takedowns will be incredibly difficult for Tate. Tate’s a scrapper and I wouldn’t count her out, but my head says Holm retains the title.

Alex: Holly Holm by decision
The Ronda Rousey era is over in the Woman’s Bantamweight division and the first fight out of the chute is a big one. Holly Holm vs Miesha Tate is a matchup of the best women in the division not named Ronda. This fight is interesting and has received little coverage from the media.

Miesha Tate has increased both her striking ability and her ability to cover ground with her striking allows her to execute her real strength which is her wrestling and grappling. Her skills and her overall toughness makes her a tough matchup for anyone. She displayed this in overcoming Olympic wrestler Sara McMann. Holly Holm’s striking is at a different level than the entire division. Her years of boxing training allows her to change angles and striking puts her in the driver’s seat in this division. Miesha comes forward and doesn’t cut a lot of angles. Holly’s style will void Miesha’s takedowns and make her striking useless. Also watch how well Holly controls the distance. This fight might not be close. To beat Holly, you must take her out of her comfort level and it may take a while for that to happen. It will take someone to time her properly and strike well enough to get inside and take her off her feet.

GG: Holly Holm by 3rd round TKO
If Holm is on, someone may have to save Tate from herself. Tate’s tough as nails and will keep moving forward as long as she’s standing. I actually think she’ll fare well for a round or two, but Holm’s accuracy and movement will be as Dolla Bill once said in “Player’s Club”, “Trouble, trouble.”

I don’t see Tate going out. But I think the referee will stop it in the third.

Duan: Conor McGregor by 1st round TKO
I know there are those who feel this is a tricky bout for McGregor and that Diaz could potentially give him hell. I just don’t see it at all. For a start, Nate’s not going to be at a hundred percent. And even if he is, I think the styles clash massively favours McGregor anyway.

Diaz has a very traditional striking game. McGregor’s style is made to disrupt it. Conor’s movement will break his rhytym, and once that’s gone, Nate will have nothing to work off of. McGregor will find him an easy target and should take him out early.

Now, I don’t expect it to happen, but if McGregor does lose here, it will go down as number 1 on the list of all-time dumb matchmaking decisions. There’s not a smart promoter in history who would risk their top star in a nothing fight so far above weight.

Alan: Conor McGregor by 1st round TKO
Conor McGregor has an ability like nobody we’ve ever seen in the combat sports world to turn a negative into a positive. His spinning of losing an opportunity at two titles into his newest pearl, “The Conor McGregor Title” is an absolute stroke of genius. Likewise his ability to create a ton of hype surrounding his fight with Nate Diaz and make it seem like even more of an event than the Dos Anjos fight is utterly impressive.

Outside the cage he can do no wrong right now. Inside the cage, it will be the same case this weekend. At some point, McGregor is going to slip up and get shown up in one of his fights. It might be in the near future or it might not be for years down the line. But it won’t be against Nate Diaz in this fight. It’s become increasingly apparent that Diaz just sees this as a handy payday and it doesn’t appear like he’ll be in great shape. McGregor, on the other hand, looks in incredible shape and for once, will not be killing himself to make weight. This is a tailor made opportunity for another McGregor star performance. As for a prediction? Well at this point we just have to go with what the man himself says right – 1st Round KO.