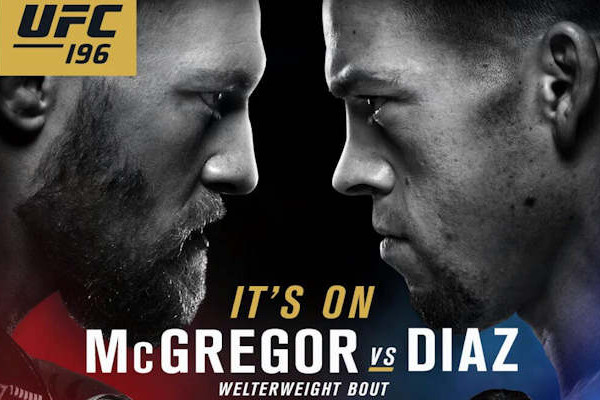 We have UFC 196 live coverage tonight. Join us!


According to Dana White’s Twitter polls, people think both of the main fights tonight are close. That can bode well for business.

As of twenty minutes before the show, Holm and McGregor were winning the polls 52-48. You can still vote below.

Also, Georges St-Pierre is in the building tonight. If McGregor wins, may we possibly see GSP vs McGregor at UFC 200?

Well, well, well … Look who it is! Like seeing a ghost. Hear from the man himself later tonight on FS1. Photo via @stouffer3

Shevchenko had the best shot with a straight left, but didn’t do much otherwise. Nunes paced the round with low kicks, though didn’t really connect strong. She got the takedown late in the round which may have leaned the round to her side.

Nunes is too overpowering. Fight went back to the ground and Nunes pounded her bloody. She got her back and tried for a rear naked choke, but couldn’t sink it. Shevchenko was fighting it and ended up on top at the end of the round.

Nunes tried to power her down again, but Shevchenko had the better balance and ended up on top and into side control. Nunes looks tired, though may be buzzed from an elbow. Shevchenko is in much better shape in the third, even after the beating she took last around. Nunes had nothing, but Shevchenko is way too patient. She should’ve ramped up the pressure.

Lawlor came out strong with punches in bunches and Anderson was wobbly. But he clinched and got his legs back. Anderson landed one nice right hand, but Lawlor looked great in the 1st.

Lawlor caught a leg to start the round and had a takedown for a short time. He tried to keep everything in the center of the octagon and landed some nice punches. Anderson used an inside leg kick and doubled up on the right hand to some success. Anderson came low and ran right into Lawlor’s knee. They had a nice exchange to end the round. Close round, but probably Lawlor’s again.

Anderson got the takedown and held the top position for much of the round. With about a minute left, they were stood up and Anderson kept peppering Lawlor with leg kicks. Anderson clearly won the third. Whoever won the second round wins this fight.

Latifi caught a kick attempt and blasted Villante for the best shot of the round. He tried to get the takedown, but couldn’t. Slow round and I thought Latifi won it, but based on the scoring in the last fight, who knows?

Latifi scored two huge takedowns, but Villante was able to get back up both times. Villante’s best weapon has been his kicks.

Latifi scored another takedown and landed a big right hand. Villante has spent so much energy trying to stuff takedowns. Pretty boring fight.

Tate caught Holm’s leg and blasted her with a left. Holm got the better of her for most of the rest of the round, but Tate did land a couple more counter lefts. Holm had a nice punch-kick combination that Tate didn’t even see coming. Tate’s face is already red on the left side.

Tate got a takedown and man-handled Holm on the ground. Holm could do nothing with her and Tate landed a lot of shots to her face while holding one of Holm’s arms away. Tate got her back, but couldn’t get the choke under the chin. She fell backward and got the choke, but Holm broke her hands. Holm’s going to make it to the third.

After that firecracker of a second round, the third round was fairly uneventful. Tate went for two takedowns and didn’t get either. Holm landed two head kicks and a right hand that probably gets her the round.

Tate couldn’t get the takedown again, which meant that Holm peppered her with punches and kicks to win the round. Major difference in Ronda and Holly; Ronda would constantly work for the finish while Holly is content with winning a points battle.

Holm was winning the round much like the past two until Tate dove in for the Hail Mary of all takedowns, got it, got her back, and sunk in the choke. Holm tried to flip her over, Tate held on, and Holm went out. Fight over. Miesha is the new champ.

Winner: Miesha Tate by way of 5th round submission

Both guys are just loading up on their strong hands. There’s not much head movement going on right now. They’re throwing heavy shots. McGregor is throwing a looping uppercut which Diaz should see coming. McGregor’s coming up short on some of the punches because of Diaz’s length advantage, but he’s also landing. Diaz’s already bleeding. Diaz got a takedown, but ended up on the bottom and McGregor landed some punches. McGregor’s round.

My feed went out, but McGregor was starting to land big shots. But he caught one from Diaz and was rocked. Diaz got him down and nailed him with some ground and pound. He then sunk in a choke to finish McGregor.