Before we get to everything else, I wanted to pay my respects to the family of Hayabusa, who passed away during the week. Watching him walk last year was one of the most inspiring things you’ll ever see.

– Wanted to throw a quick shout out to Premier for their twelfth show on Sunday night. Shayna Baszler beat Colleen Schneider in the featured attraction match. And Joe Graves is the new Premier champ, beating JR Kratos in a great match. You can check out the play by play of the show as well as photos from the matches.

– We have all of the storyline lead-up to WrestleMania 32 as well as a podcast with Big D and me.

– The Fabulous Freebirds will be inducted into the WWE Hall Of Fame.

– Toru Yano, Hirooki Goto, Michael Elgin, and Tetsuya Naito are in the semifinals of the New Japan Cup.

– In a bit of unfortunate foreshadowing for Dana White, he talked about why he didn’t like the business side of Holly Holm vs Miesha Tate.

– Holly Holm wonders where the coverage for her was when she was boxing.

– Who gets Ruslan – Cotto or Crawford? 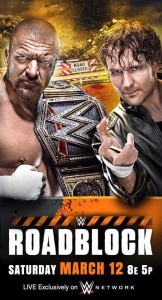 – Not that this was a surprise, except for maybe the timing. Bellator signed Silva, who is still suspended according to the NAC until next spring.

RIZIN also signed him earlier today and rather than fight, he’s going to do a grappling exhibition. Not sure how the NAC will feel about that. Maybe they’ll feel that it’s similar to a pro wrestling match.

Big D and I discussed this on the latest FGB Radio, which I already linked above. I hope that Roadblock is more like the old Saturday Night Main Event, where a huge storyline turn or advancement happens. What I hope Roadblock isn’t, is just a status quo wrestling show with regular wrestling matches.

Triple H will wrestle on this show and on the Madison Square Garden show as well (in a tag match), so he’ll get any ring rust off for WrestleMania.

Will Dean Ambrose win and shake up WrestleMania? If he does, we can probably take that as a clear sign that they’ve figured out Roman Reigns is ice cold. However, I don’t think it will happen.

3. UFC is unstoppable (at least according to their press conference).

A few things from UFC’s presser:
– People are trying to copy Conor McGregor
– Daniel Cormier is like Kurt Angle in 1999, meaning he thinks he’s a babyface, but is actually acting like a heel because of his holier than thou attitude
– Jon Jones transformed himself into the People’s Champ
– Chris Weidman is trying
– Urijah Faber tried too hard
– Tony Ferguson needs to spend more money on a better fitting suit
– Joanna Jędrzejczyk and Claudia Gadelha stole the show

And what does she get for beating Holly Holm? Another match with Ronda Rousey.

However, had the fight been promoted better, Tate’s win would’ve been just as big, or a bigger story than the main event. She was the clear underdog from the start, but was able to get through Holm’s defense in the second round. Those who were either rooting for Miesha or just rooting for the underdog felt that if she could just duplicate her efforts, or if Holm could make a mistake, she could win the fight. After the third and fourth rounds, it didn’t seem likely, until it happened. The fight told a great story and Miesha showed great perseverance.

Once I saw the size difference in the first round, I was pretty worried for McGregor. But then, he started tagging Diaz and bloodied him up, which was more of a mirage than a sign that Diaz was going out. McGregor really had to get into his punches and it seemed like Diaz’s ability to take those shots spooked McGregor a bit.

Add to that, McGregor was tired very quickly in the second, possibly from the added muscle and him having to put everything into his punches. He was buzzard meat for Diaz.

Who will Diaz face next? There’s talk of a Robbie Lawler fight, but Lawler may simply hit too hard for him. However, Diaz needs to use his newly created stardom to fight the biggest fights. A title shot against Lawler and a rematch with McGregor would be the two biggest.