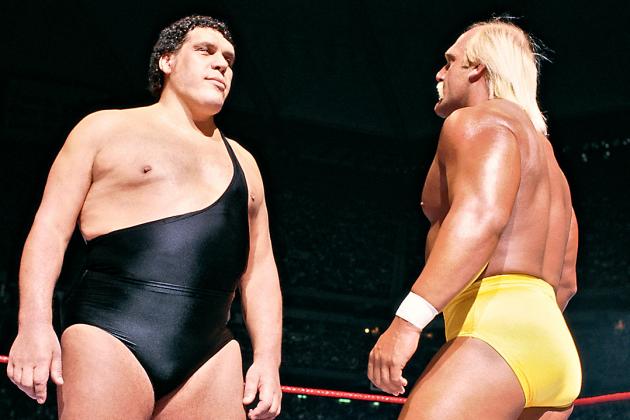 Check out part three of our series of posts ranking WrestleMania.

We’re closing in on the half-way point in our WrestleMania rankings put together by Alan (@Alan4L), Duan (@DuanDub), Big D (@EmperorBigD), and GG (@roheblius).

WrestleMania XV was held on March 28, 1999 at the First Union Center in Philadelphia, making it the second WrestleMania in a row to be on the east coast.

What was good about the show?
Hey, it’s Shane McMahon!

Shane McMahon’s WrestleMania debut was against X-Pac. And it was actually quite fun. Part of the reason why Shane is so beloved by the current fanbase is because they saw him as a part-time wrestler who busted his ass and had daring and dangerous matches, all for the love of the business. His match with ‘Pac was full of interference and a swerve which was concurrent with Vince Russo booking. Generally, I hate that stuff, but for this match, it didn’t take away from it.

Stone Cold Steve Austin’s match with the Rock is historical in the sense that it was the first time they’d face off against each at WrestleMania. They’d go on to do it again twice more. It is the most famous WrestleMania feud, so much that it spanned three big shows. While this match was probably the worst of the three matches, it was still really good work from one guy who was on absolute fire and another who was on his way.

What was bad about the show?
It was Russo-riffic with lots of late changes to the card and not a lot of good wrestling. It also had one of the worst matches in WrestleMania history with the Undertaker beating the Big Bossman in a Hell in a Cell.

You had a Brawl-For-All wipeout, a misuse of Mankind who was coming off a great year, lots of meaningless multi-man matches for belts that weren’t over, and booking that was trying to stuff 10 pounds of stuff into an 8 pound bag. 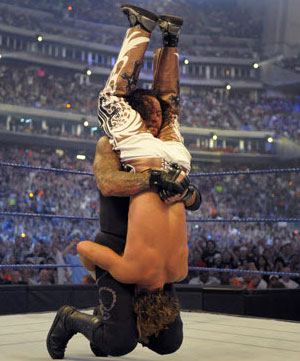 This show was held at Reliant Stadium in Houston on April 5, 2009.

What was good about the show?
Because I was there live, the stadium was a positive. It was really big, but didn’t feel overly big. It still felt intimate enough. But most people watching weren’t there live, so this isn’t a big deal to most.

The best thing on this show, which would’ve also been the best thing on just about every WrestleMania, was the classic match between Shawn Michaels and the Undertaker, which came in as the third greatest WrestleMania match of all-time on our list. While I slightly prefer their match at WrestleMania 26, that doesn’t take away from how great this match was.

Stone Cold Steve Austin’s pop when he drove down to the ring on his ATV was the second biggest pop of the night. After how bummed I was at his Hall of Fame speech, that moment more than made up for it.

What was bad about the show?
The main event was absolutely awful live and ended so flatly that it didn’t even feel like the show was over. On the broadcast, it’s a bit better, but still not good. After all of the buildup with Orton’s Legacy and Triple H’s family, it was just a straight wrestling match, and not a good one.

Matt Hardy vs Jeff Hardy wasn’t terrible, but it just didn’t work. The buildup was tasteless and the match ended up flat, even though they tried to pop the crowd. I just don’t think the fans wanted them to feud.

Kid Rock was on the live broadcast which led into the Miss WrestleMania battle royal, which was won by Santino in drag. Wait, was Vince Russo booking this show too?

What was good about the show?
For 1997 being one of WWE’s best creative years, WrestleMania 13 sure was lackluster. What saved the show? Well, maybe the single greatest WrestleMania match of all-time did.

Stone Cold Steve Austin faced Bret Hart in what we voted as the greatest WrestleMania match of all-time. The match signified a changing of the guard with Bret Hart turning heel and Austin turning babyface. The ending sequence with Austin passing out while bleeding is maybe the most iconic moment in WrestleMania history.

By the way, Ken Shamrock as referee was a perfect touch. It showed the importance of the feud having someone real like Ken as the third match in the ring.

If you want to watch another match on this card, you can probably get away with a pre-Triple H as Hunter Hearst Helmsley facing Goldust. Chyna was quite the specimen.

What was bad about the show?
If not for the Austin/Hart match, this might be in the running for the worst Mania show of all-time. Why? It features the worst main event in WrestleMania history. Mania 13 was originally going to be a rematch between Bret Hart and Shawn Michaels. But business wasn’t sound and Vince decided to change it up. He chose the Undertaker and Sid Vicious to lead the way.

While Hart and Michaels would’ve never happened anyway because Michaels lost his smile, the choice to go with the big men was a bad one. The match was awful. It was built around Taker as someone who could take punishment and keep coming. To think, Sid Vicious main evented two WrestleManias which is only one less than Steve Austin.

There was nothing else of quality on the show, so you could throw any of the other four matches not mentioned (including Rock’s WrestleMania debut) in the bad category. 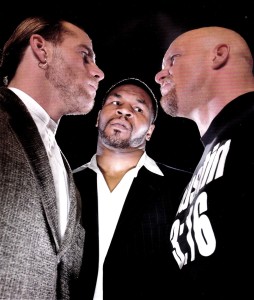 WrestleMania XIV was held at the TD Garden center (previously known as the FleetCenter) on March 29, 1998.

What was good about the show?
I wouldn’t call this a good show, but I’d call it a fun show. Most of the things that they needed to work, worked, especially the draw for the show which was Mike Tyson meets Stone Cold Steve Austin.

Early on, it wasn’t clear if Tyson was just going to be a referee or if he would actually get in the ring. The buzz was that he would wrestle, but it wasn’t the plan. WWF wasn’t really clear throughout, enjoying the buzz they were getting with the confusion.

The buildup was tremendous with the best single segment in WWE Raw history.

While the climax was anticlimactic as Austin and Tyson didn’t lockup since Tyson counted Michaels out after Austin hit him with the stunner, it was still a powerful turning point for WWE. Much like how the original WrestleMania was built around celebrities to help get Hulk Hogan over, this was similar done to perfection.

Almost everything else ranged from decent to good including The Rock holding onto his Intercontinental title after Ken Shamrock’s submission win was changed to a DQ, to Triple H beating Owen Hart, to Cactus Jack and Chainsaw Charlie beating the New Age Outlaws for their tag straps.

What was bad about the show?
I did say almost.

The Undertaker finally had his chance to face Kane one-on-one and it flat out sucked. It was 17 minutes of flat out sucktitude.

WrestleMania III was held at the Pontiac Silverdome on March 29, 1987.

What was good about the show?
How famous is this show? I believe it still holds the highest buy rate in WWE PPV history. There were far less PPV homes in 1987, but the percentage of people who had the ability to buy the PPV was the highest for any single WWF/WWE show.

While Hulk Hogan vs Andre The Giant is one of the most famous matches in WWE history, the second most important match on the show is the best match in the first 9 WrestleManias (at least). We also have it as number 8 on the top matches of WrestleMania list.

Randy Savage and Ricky Steamboat had a helluva match. Big D said the word he’d use was “smooth.” And smooth it was. There wasn’t a hiccup in the process and when Steamboat finally won after the hardcore angle leading up to the match, it was maybe the first true WrestleMania moment.

It’s hard to say that any other single match was good, but what I can say is that a lot of the matches had built up feuds and you actually wanted to see the culmination of them. I still remember the My Way video they put together for Roddy Piper’s “retirement” match on Saturday Night’s Main Event.

What was bad about the show?
For many, the Hogan and Andre match is memorable because of how the WWF built up on the fictional story that not only had Andre never been slammed before, but that he was still undefeated. Even when I was but a youngster, I scratched my head at the undefeated claim. But most people remember the mountain that Hogan climbed that way.

The match was pretty bad as Andre wasn’t mobile. In their entire 1987 and 1988 series, the only good match I saw them have was a cage match on an old Coliseum Home video. This was probably the second best, but still not good. You still had the second big WrestleMania moment on this show though, with Hogan slamming Andre and getting the pinfall. I understand that Andre had to go up for him, but still, that was a tremendous feat.

There were some other bad matches like Hercules against Billy Jack Haynes and the Junkyard Dog losing to Harley Race.

We’re at the halfway point. WrestleManias only get better from here!