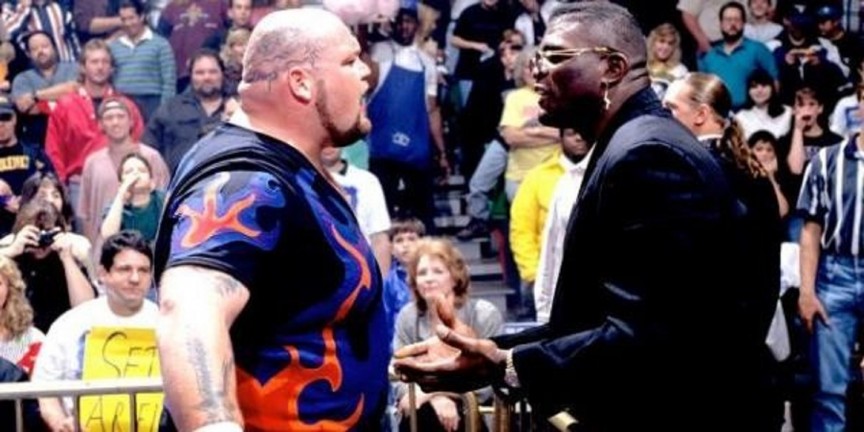 Check out part one of our series of posts on ranking WrestleMania.

Usually around this time, we decide to do something special around WrestleMania. Last year, we wrote about the best matches in WrestleMania history. This year, we’re going to rank all of the 31 WrestleManias from worst to first.

Part one of this list will feature the six worst WrestleManias of all-time (31st worst through the 26th worst), as ranked by Alan (@Alan4L), Duan (@DuanDub), Big D (@EmperorBigD), and GG (@roheblius).

We’re also going to link to the WrestleMania 30 for 30 podcasts Big D hosted in case you want more discussion on each show.

WrestleMania XI was on April 2, 1995 and was held in the Hartford Civic Center.

What was good about the show?
Very little.

The show was built around NFL Hall of Famer, Lawrence Taylor. Taylor fared well, thanks to Bam Bam Bigelow bumping huge for him and for Pat Patterson taking him through all the steps. And while he blew up during the match, the end result wasn’t a terrible way to end the show.

Shawn Michaels tried hard to have a good WWE title match with Diesel, but this wasn’t the best of their matches. Owen Hart worked enough for four men when he and surprise partner Yokozuna beat the Smoking Gunns for the tag straps.

What was bad about the show?
WWE was super cold in 1995 and so was this show. It was hokey with Nick Tuturo from NYPD Blue performing an investigation to find Pamela Anderson, who we didn’t even know was lost. Shawn Michaels said she was supposed to be with him. Instead, he came out with Jenny McCarthy, the 1993 Playboy Playmate of the Year and Anderson came out with Diesel. Poor McCarthy was treated like a mid-carder.

In one of the worst Bret Hart matches, he beat Bob Backlund in an “I Quit” match. I believe it was originally supposed to be a submission match, but guest referee Roddy Piper kept asking, “Whattaya say?” to both men when a submission wasn’t even attempted. Hart won the match with Backlund’s own chicken-wing, but really, we were all losers.

The Undertaker won a match against King Kong Bundy, who made his first WrestleMania appearance since WrestleMania III. It was one of the worst Taker Mania matches, though, that was the norm early in Taker’s career. Also, you’d think that Jeff Jarrett and Razor Ramon would have a quality match, but you’d be wrong. The match was inundated with interference by the Roadie and the 123 Kid. 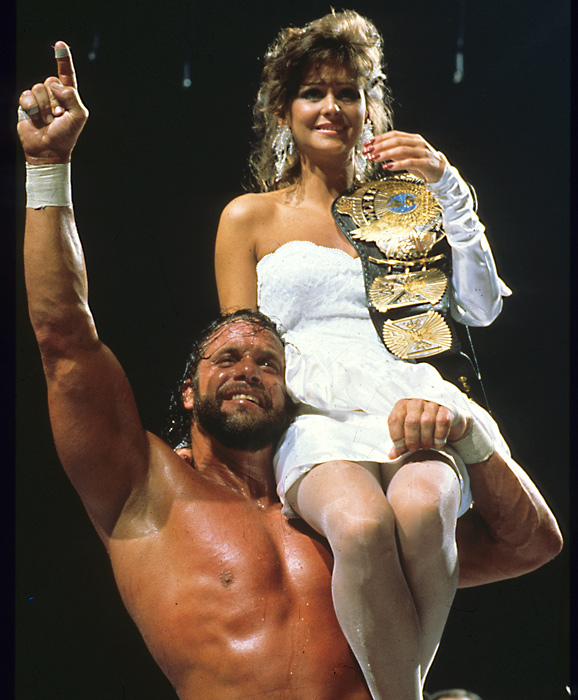 This was the first of two WrestleMania shows in a row that were held in the Atlantic City Convention Hall. The date was March 27, 1988.

What was good about the show?
The idea of a tournament is actually so cool. It makes it feel like the winner is truly the winner and deserving of the title. And while the Randy Savage and Ted DiBiase final was a good match, it was built to set the stage for Savage’s eventual losing of the title to Hulk Hogan at the very next WrestleMania.

Battle Royals are often not all that good and the battle royal at WrestleMania IV wasn’t good, though what came out of it, which was a Bret Hart and an eventual Hart Foundation face turn, was well done.

If you have to reach, the 6-man tag team match between the Islanders and Bobby Heenan and the British Bulldogs and Koko B. Ware was short, though not terrible. The Islanders and Bulldogs (even with Dynamite Kid on his last legs) would’ve been better, but at least you got some Heenan comedy.

What was bad about the show?
This show was a boring four hours. There wasn’t one single quality entertaining wrestling match on the show. And the booking of the tournament sucked.

There was the possibility of a Savage and Ricky Steamboat rematch from WrestleMania III, but instead, Greg Valentine went over Steamboat. Savage beat Valentine, Reed, and the One Man Gang to get to the finals in quick matches that weren’t good.

The hook for the show was yet another match between Andre The Giant and Hulk Hogan, which main evented very successfully the year prior at WrestleMania III. They faced each other in February prime time TV special on NBC which ended when the twin Hebner refs screwed Hogan out of his title. Their match-up at WrestleMania IV was a terrible punchfest that ended in a double countout. Worse, it was during the middle of the show. Those who equated WWE with Hogan were very disappointed to see that he was knocked out so early in the show.

Jake Roberts and Rick Rude had a 15-minute draw that watered your eyes.

The 9th edition of WrestleMania was held on April 4, 1993 at Caesar’s Palace.

What was good about the show?
Jim Ross was in a toga! Ross’ first WrestleMania was in a venue that usually hosted big time boxing matches.

The Steiner Brothers vs the Headshrinkers was probably the best actual match on the show, and is one that Alan says still holds up.

Yokozuna and Bret Hart had a pretty decent big man/little man match for Bret’s title, but the ending made it pretty frustrating overall.

What was bad about the show?
The ending I alluded to above was one of the worst finishes of a big match in WWE history. It deflated the show for all but the most hardcore Hulkamaniacs. Hart had just lost the match thanks to Mr. Fuji throwing salt into his eyes.

A newly shrunken Hulk Hogan came down to ringside and Mr. Fuji challenged Hogan to a match against the newly minted Yoko. Fuji tried to salt trick again, but missed and Yoko took a face full of salt, and Hogan was champion yet again.

The rest of the matches were all disappointments. Hogan and Brutus Beefcake as the Mega-Maniacs were disqualified against Money Inc. in the middle of the show. Much like WrestleMania IV, using Hogan mid-show was a bit of a bummer for the casual fans, but it was supposed to be a new era for WWE, so it made more sense.

What was good about the show?
The best match of the first two WrestleManias was the British Bulldogs defeating the Dream Team for the tag straps. Dynamite Kid was on fire and took a ridiculous bump from the top turnbuckle to the floor. The Bulldogs were on fire at the time and were one of the best tag teams in the business.

WWF Wrestlemania II – The British Bulldogs Vs… by notrobvandam

Terry Funk and his brother Hoss (Dory Funk) had a pretty decent, though a bit boring, match against the Junkyard Dog and Tito Santana. Funk’s feud with JYD was fun, though when it came to work, JYD was a one trick pony and Funk worked overtime to try and make Dog look good.

I’ll always remember the combining of two universes for the battle royal. NFL stars, including Russ Francis from my hometown team (and also the football player who lasted the longest), faced off against WWE stars. The big get was William “The Refrigerator” Perry, just two months from winning the Super Bowl and being the NFL’s “it” player of 1986. Also, Bill Fralic played the obnoxious jock to the hilt.

Lastly, the main event between Hulk Hogan and King Kong Bundy was exactly what it should’ve been. No one expected it to be a masterpiece, but with the blood, and Hogan’s savagery, it was what the casual fans wanted.

What was bad about the show?
Most of the matches were rushed for time. The Fabulous Moolah match with Velvet McIntyre went a whole 1:25 and McIntyre’s boob nearly came out when she missed a splash.

The one match that should’ve been given less time was Mr. T in a boxing match against Roddy Piper. Mr. T’s biggest worry was being exposed for not being real, and that’s exactly what happened. He didn’t train or spar and was so tired that he looked terrible. Piper didn’t look fantastic either, but looked better than T. 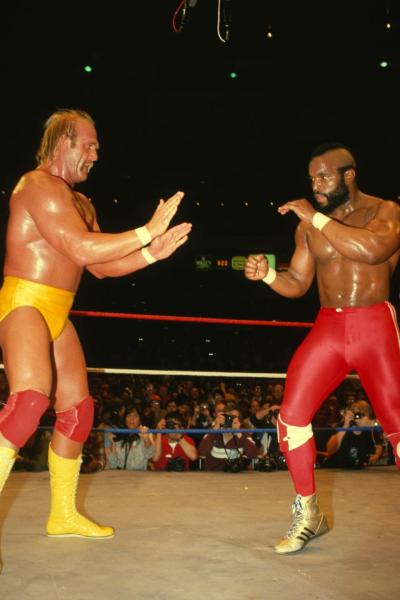 The grandaddy of them all was on March 31, 1985 from Madison Square Garden.

What was good about the show?
Vince McMahon really went all out with the celebrities, which made the show feel larger than life. Muhammad Ali, Cyndi Lauper, and Mr. T were all part of the show and all were big time celebrities in 1985.

As far as the wrestling is concerned, Ricky Steamboat and Matt Bourne had a nice, albeit short match. In fact, there were only two matches longer than 7 minutes. The first was the main event, which was well laid out. Roddy Piper and Paul Orndorff made Mr. T look halfway decent and of course, Hulk Hogan secured the win.

(By the way, the other match that went longer than 7 minutes was David Sammartino vs Brutus Beefcake.)

What was bad about the show?
For such a big show, it started out like a random house show with Tito Santana facing The Executioner (Buddy Rose). King Kong Bundy beat SD Jones in one of the most famous squash matches.

While most of the matches were bad on this show, the worst had to be Andre The Giant vs Big John Studd. The stipulation was that the match would end when Andre slammed Studd. If he did, he’d get $15,000. But if he didn’t, he’d have to retire. If Andre didn’t slam Studd, how was the match to end? I’m still not quite sure. Andre slammed Studd of course.

The production was also pretty terrible for WWE standards. Lord Alfred Hayes did standups and was interrupted by wrestlers walking in front of him. 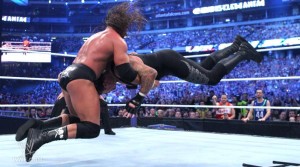 What was good about the show?
The Rock was back! While he wasn’t used in a wrestling capacity, he was a major part of the show, setting up back-to-back main events at the next two WrestleManias against John Cena.

There were also two excellent matches on the show. The Undertaker and Triple H had their second of three WrestleMania matches. Triple H wanted to break the streak and in a great spot where he gave Taker the Tombstone, the crowd (and me) nearly thought he was going to do it.

Randy Orton and CM Punk had a really good match that is nearly forgotten in WrestleMania lore. Orton used yet another creative way to hit the RKO to beat Punk.

Most of the matches under delivered from what was promised, including Edge vs Alberto Del Rio (which wasn’t bad, but wasn’t all that it could be because of Edge’s injured neck), Cody Rhodes and Rey Mysterio, and the main event between John Cena and The Miz. Because the match was merely a backdrop to John Cena and the Rock’s feud, it was an afterthought.