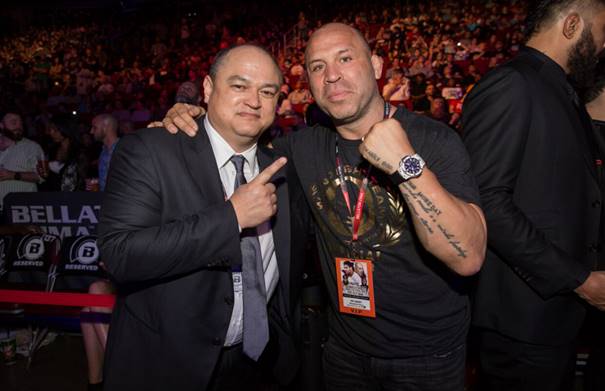 The Axe Murderer is back! Bellator signs Wanderlei Silva.

Back in 2014, as a result of Wanderlei Silva refusing to take a drug test, the NAC (back when it was called the NSAC) gave him a lifetime ban. In February, the NAC amended that, instead giving him a 3-year ban, retroactive to May 2014. He’ll be able to fight next spring, when he’s 40 years of age.

Bellator’s press release doesn’t have anything about when he will fight or who it might be with. You can read it below.

SANTA MONICA (March 2, 2016) –Bellator MMA is pleased to announce that one of the most popular, recognizable and beloved fighters in the sport of mixed martial arts, Wanderlei “The Axe Murderer” Silva (35-12-1), has signed an exclusive multi-year, multi-fight contract with the promotion. The 39-year-old publicly fielded offers from companies all around the world, but the former Pride FC Middleweight Champion made the decision to take his explosive style to Bellator MMA.

“The Axe Murderer” has fought in some of the most memorable feuds and battles the sport has ever seen. His wars with Quinton “Rampage” Jackson, Tito Ortiz, Mirko Cro Cop, Vitor Belfort, Dan Henderson, Kazushi Sakuraba, Chuck Liddell, and Michael Bisping are the stuff of legend – but Silva is far from ready to close the book on his illustrious career.

In addition to his Pride FC Middleweight World Championship, Silva’s packed trophy case of accolades includes awards for Fight of the Year (2003, 2004, 2007), KO of the Year (2008), and multiple Fight of the Night awards including one for each of his last three fights, just to name a few. He now looks to continue to provide his award-winning, entertaining fights inside the Bellator cage.

Silva has several options for his first fight with Bellator. Although he has spent the majority of his career at 185-pounds, one of the things that his fans love most about him has been Wanderlei’s willingness to fight the best of the best – even if it was up two weight classes at heavyweight – as proven by his heavyweight wars against guys like Mark Hunt, Gilbert Yvel, Kazuyuki Fujita and Cro Cop; Or, his battles against light heavyweights like Ortiz, and his most recent opponent, Brian Stann, who he knocked out in the second frame.