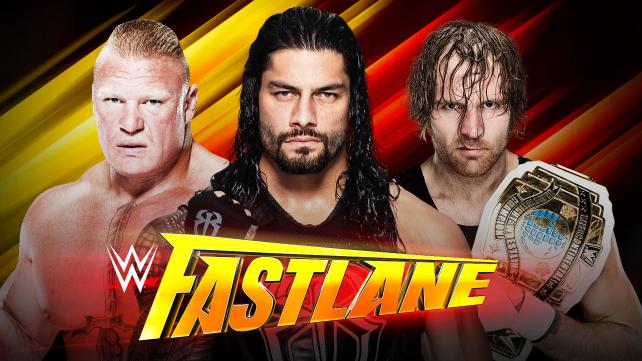 Check out our WWE Fastlane play by play.

During the preshow, Kalisto kept his US title by beating Alberto Del Rio in a two out of three falls match.

Sasha Banks and Becky Lynch Vs Tamina and Naomi

Naomi and Tamina are more of a heel tag team than any heel tag team on WWE’s roster. Well, at least for this match. Long heat spot on Becky, including Naomi pulling Sasha off the apron right as Becky was about to tag her, which meant a nice hot tag.

Sasha ran wild and was about to put Naomi into a submission, but Tamina interfered. Naomi hit her with the flying butt (which is what you have to call it) for a two count. Finally, Banks got Tamina in the Bank Statement. Naomi tried to interfere and Becky caught her late. But Becky put her in the Disarmer at the same time and Tamina tapped out. That was a fine opener.

This was a really fun match, and what most Owens’ PPV matches are. Lots of back and forth and fairly even offense.

Late in the match Ziggler hit the Fame Asser for a two count and then went for a Superkick. The ref was in the way so Dolph hesitated, but it gave Owens the opportunity to hit the Popup Powerbomb for the three count.

I wonder if Owens somehow becomes part of the AJ and Jericho match later on.

Big Show, Kane, and Ryback Vs The Wyatt Family

Surprisingly, the babyfaces won when Ryback beat Harper with the Shellshocked. I guess it doesn’t matter if the Wyatts get involved with Lesnar later?

Charlotte has some damn presence.

These guys were really creative, though there were some possibly scary spots. AJ dove out to the floor and Jericho met him with a perfectly timed drop kick. AJ also was ready to spring board into the ring and Jericho dropkicked the top rope and AJ Flair flopped into the ring. AJ went for a hurricanrana, but Jericho tried turning it into the Walls Of Jericho and nearly dropped him on his head.

Jericho had Styles outside the ring and put on the old Liontamer to possibly get the countout. But Styles came back in and Jericho hit the Codebreaker. Styles’ foot was under the ropes. Styles then hit the Styles Clash for a two count, but Jericho tapped to the Calf Crusher.

They shook hands after the match after Jericho teased that they were going to fight.

Edge and Christian came out for the Cutting Edge Peep Show to basically call New Day E&C ripoffs. Big E tried to get over LeBooty James since they’re in Cleveland.

All the Social Outcast are out and Truth noticed there were four and there was only one of him, and rather than call out some friends, he just said, “That’s what’s up.”

Goldust came out to help Truth and tripped Axel. Goldust threw Adam Rose into the ring and Truth had to leap over him and then Axel rolled him up.

Truth walked out on Goldust after the match.

Lesnar took them to Suplex City early. Reigns and Ambrose haven’t really done much against each other yet. Lesnar went for a F5 on Ambrose in the ring and Reigns speared him and then hit him with a Superman punch. He went outside and caught Reigns and was ready to do the same, but Ambrose gave him a nut shot. Together, they powerbombed him through the announcer’s table.

Ambrose then threw Reigns into the steps. Why neither of them tried to roll Brock into the ring, who is basically knocked out, I have no idea.

Then they gave Lesnar a second one and decided to bury him under remnants of the tables. Why again didn’t they try to pin him? Don’t they know that Paul Heyman can just unbury him?

Reigns had Ambrose on his shoulders and Lesnar suplexed them both. That was the move of the evening. Reigns hit Lesnar with a spear and then went to cover him, but Lesnar grabbed him in a kimura. Reigns stood up with Lesnar still holding onto the move. Ambrose hit him with a chair twice to break the hold and then again to knock him out of the ring. He also hit Reigns with the chair. After he hit Lesnar, he turned back toward Reigns and was speared. Reigns got the pin.

Triple H came out in a suit and they just stared at each other as the show ended 10 minutes early.