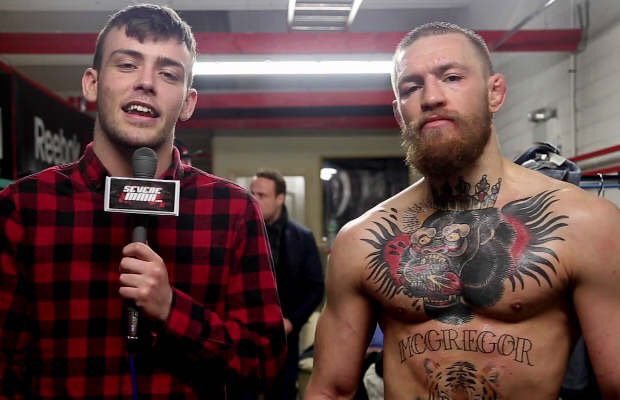 Who should Conor McGregor fight at UFC 196?

Word broke early Tuesday morning that Rafael Dos Anjos was out of his March 5 title defense against Conor McGregor at UFC 196.

According to Ariel Helwani, Dos Anjos broke his foot on Friday and hoped that it would get better over the weekend. But it didn’t and they made the announcement today.

Dana White has been quiet about the issue so far, only tweeting about promotional stuff on Twitter.

So who is available and what should the UFC do about the big PPV, which was marketed around McGregor trying to become a multiple division champion?

Donald Cerrone, who won an easy one on Sunday, has thrown his Cowboy hat into the cage.

He's going to have to get on his knees and beg…

Anthony Pettis has also made his thoughts clear.

What about Jose Aldo who has stated in the past that the only fight he wants is with McGregor? According to Guilherme Cruz’s story, Aldo isn’t in shape and turned down the fight.

Kevin Iole said that the UFC turned down Khabib Nurmagomedov’s offer to fight McGregor because he hasn’t fought for two years.

Told that @TeamKhabib offered to replace @RdosAnjosMMA and @UFC said no. Going to update my post.

Personally, I think they should put Cerrone in the fight based off the UFC Go Big press conference from last fall. Cerrone was one of McGregor’s targets and there’s a natural feud brewing. Cerrone just fought at welterweight, so there could be a struggle getting back down to lightweight in a short time. Or, maybe you make it a catchweight fight since McGregor looks large, even for a lightweight.

Also, because the marketing of the show has been based off McGregor, there are going to be a decent amount of Irish fans who are traveling for the event. Pulling the fight completely will hurt not only business for March 5, but possibly future business as well.

I asked Alex Goff his thoughts and he had a different idea.

All morning I’ve read what people think the UFC should do. While I find all of the Rafael dos Anjos replacements interesting, I feel it would be the bad move. The company should headline UFC 196 with Holly Holm vs Miesha Tate. The tickets for the most part are already sold and this fight has interest. Then you save Conor for the big show, UFC 200. UFC 196 was shaping up to be an awesome event, now that it’s gone, it’s not a time to risk the future.

And then there’s that. Do you save McGregor for UFC 200 and not risk him, or find the best possible solution for UFC 196?