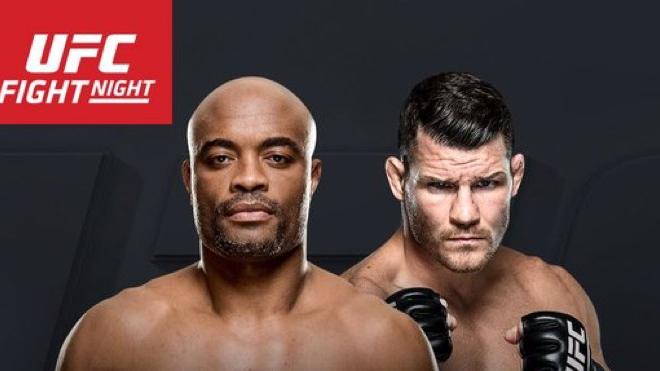 Check out our Silva vs Bisping live coverage!


This is a nice little test for the UFC, putting a solid main event with star power on their Fight Pass subscription service, rather than putting it on PPV and making a good amount of money with it.

How many times will we get to watch Anderson Silva fight again? That’s reason alone

Rivera is doing a nice job keep Pickett just out of reach with his boxing and low kicks. He dropped Pickett once and caught him again. Pickett landed a great left, but took another shot that made him worse for wear. With about 30 seconds left, Pickett started throwing sloppy haymakers and sucked Rivera into some crazy exchanges. Pickett looked wobbly a couple times in the round.

Pickett scored a takedown to slow the standup battle, which he’s losing. Pickett hit him low on a hook and that stalled the fight a bit more. They both threw down again near the end of the round and both threw high kicks at the same time.

Pickett got a takedown off a guillotine attempt and then added another takedown right at the end. Both guys were a bit tired in the third round and there wasn’t a lot of action, but Rivera may have given the fight away late.

Rivera was in control for most of the fight, but lost because of the scoring system. Should’ve won that one.

Nakamura got the fight to the ground early. Breese went for a leg lock. Breese is trying to engage, but Nakamura is making it hard for him. Not much to the round.

Nakamura gets the takedown, but Breese gets to the top position. On top, Breese is finally able to unload with shots, but Nakamura goes for an omoplata and stalls Breese’s progress. Frustrating fight so far for Breese.

The third round isn’t much different. Nakamura gets the takedown and Breese immediately goes for a leg lock. Lots of ground work with neither guy really able to do anything. This was supposed to be a nice showcase for Breese and it was a rough one for him.

Slow first round. They went to the ground, albeit not willfully. Not much going on, on the feet, which is where Mousasi can be deadly. They tried late in the round to mix it up, but neither could really get it going.

Mousasi is picking up the pace with his boxing. He’s trying to set up the straight right and it’s working. Leites is going for some predictable takedowns so he doesn’t have to take those right hands. Mousasi isn’t having trouble blocking them. Leites went to his back and Mousasi kicked his legs to end the round. Strong round for Gegard.

Leites went for broke and landed some wild punches and tried to get Mousasi to exchange wildly with him. Mousasi wasn’t into it and stayed on gameplan with straight punches. Leites had swelling on both eyes and blood out of the side of his left eye. Find ended up on the ground with Leites on his back and unable to do a thing.

Lots of feints from Bisping and movement coming from Silva. Bisping landed a glancing left and Silva smiled. He landed a right hand as well. Silva immediately went with the body kick. Bisping seems to be surprised when he lands and doesn’t follow up immediately. Silva seems frustrated and is now throwing bombs, but not landing. Silva had his back against the cage and started clowning, but he got caught and stumbled. He tried to hug Bisping at the end of the round, but Bisping pushed him.

Silva sat back against the cage with his hands down and he made Bisping miss a couple of times. Bisping stood back as if to say he wasn’t playing those games. Silva stepped forward and Bisping immediately got in his stance. Silva took a punch and went to the ground. He seemed to have his bearings as once Bisping went to the ground, Silva up-kicked him. But Bisping was on top and throwing a lot of punches. Silva didn’t panic on the ground. I have Bisping up 2-0.

Silva had his best round, but it ended weirdly. He was landing body kicks and pressing him. Bisping was still landing counter shots. Late in the round, Silva knocked Bisping’s mouth piece out. Bisping was worried about it and took his eye of Silva multiple times. He yelled at Herb Dean to get the mouthpiece. Herb looked like he was going to do something, but didn’t. Silva came in with a flying knee that dropped Bisping right at the bell. Silva thought the fight was over. Bisping looked at Dean as if he called time. Dean says the fight isn’t over.

Silva kicked Bisping low. Bisping is having a lot of success with Silva up against the cage. He’s in and out while Silva is looking to land big shots. Bisping eye poked Silva. This is allowing Bisping to rest. Silva came back with a vengeance. He landed some big shots late in the round, though Bisping tossed him when he was off-balanced. I have it 2-2. All the momentum is with Silva now.

Bisping is now a bloody mess, seemingly coming from the knee. Silva blasts him with a high kick. Herb Dean stops the fight to have Bisping’s cut checked. Silva nearly drops him with a front kick. Silva goes to the clinch and lands a knee. Bisping is just trying to survive. Silva’s trying to set up the big shot, but Bisping is pestering him with small ones. Bisping goes for a takedown against the cage, doesn’t get it, and takes a knee to the body for this trouble. With 30 seconds left, neither guy let their hands go, so we’re going to the judges. I have Silva 3-2.