We wanted to first wish Bret Hart the best of luck in his fight against prostate cancer. Beat cancer Hitman!

It is with great remorse that I feel compelled to speak truthfully to my friends, family and my millions of fans around the world. In the past few years, I've spent more than enough time paying the price for all those years trying to be the best there ever was as a professional wrestler. I executed excellently and my proudest claim was that I never seriously hurt or injured another wrestler in my 23 year career. I've paid a price for all that "fake" wrestling … Mark Helprin wrote: "We are all perfect clocks that Divinity has set to ticking when, even before birth, the heart explodes into a lifelong dance." I've had a great lifelong dance and I'm a survivor of many hard battles. I now face my toughest battle. With hesitation and fear, I openly declare myself in my fight against prostate cancer. In the next few days, I will undergo surgery with the hope of defeating this nemesis once and for all. My fans have always looked upon me as a hero and I've always done my best to live up to that in and out of the ring. I beat the odds when I suffered my stroke in 2002, but it is now yet again, that I … stand unafraid and face the tough road ahead of me, I will march toward this destiny with his spirit chanting in my ear. I make a solemn vow to all of those that once believed in me, the dead and the living, that I will wage my fearsome fight against cancer with one shield and one sword carrying my determination and my fury for life, emboldened by all the love that's kept me going this long already. Love is my weapon and I've got much of it around me all the time, for which I'm truly blessed and eternally grateful. My children, grandchildren, and my loving wife Steph have been and will constantly be at my side. I refuse to lose, I will never give in or give up, and I will win this battle or die trying. Most important of all, I hope can take the fight to prostate cancer. To be a leader in awareness and to set the example for men everywhere who find themselves in my very same shoes, that prostate cancer can be beaten. B x

– How AJ Styles got to keep his name in WWE.

– Speaking of Styles, he finally did the Styles Clash on Smackdown.

– Lucha Underground season three looks to be a go.

– Sheamus has tendinitis. Alberto Del Rio also has a back injury.

– WaleMania 2 is coming for you! 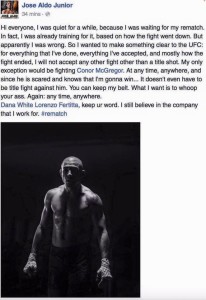 – Before his fight with Ben Rothwell, Josh Barnett had a wrestling match.

– Chael Sonnen will be on the next Celebrity Apprentice.

– What a tremendous fight this is – Khabib vs Ferguson.

– Brandon Rios will fight again, but with his dad in his corner.

I think most predicted that Anthony Johnson would beat Ryan Bader, and probably within the first two rounds. But I certainly didn’t expect it to be that easy. Bader obviously didn’t want to stand up with Johnson, but in not doing so, left himself in a bad position to be pounded and he was.

Johnson’s win puts him in line for the next title shot after Daniel Cormier and Jon Jones face-off again. With New York being out of consideration now, the UFC will make an announcement soon on where that fight will happen.

Also on Saturday night, Ben Rothwell surprisingly submitted Josh Barnett to make his claim as a top contender in the heavyweight division. We have play by play of the main card on the website.

It wasn’t my favorite Rock segment of all-time, but it was still the best thing on the TV show.

3. Nakamura will be at NXT TakeOver: Dallas

Shinsuke Nakamura will be in Dallas over WrestleMania weekend for the NXT: TakeOver Dallas show. You can read about who he’ll face on the website.

He also had his last match with New Japan over the weekend and it was a full of heartfelt moments.

It wasn’t much of a fight. Jean Pascal looked frisky last year and he looked just the opposite this time around.

Kovalev’s win sets up a future fight with Andre Ward. He also used his post-fight interview time to make fun of Adonis Stevenson.

New Japan’s reluctancy to develop new talent has started to bite them in the butt this year. First, it was Nakamura, AJ Styles, and Karl Anderson and Doc Gallows leaving. Now, their 1A to Nakamura’s 1B, Tanahashi is injured. Tanahashi injured his shoulder, but is going to continue working on it. He’ll face Kenny Omega in a match for Nakamura’s Intercontinental title.

Let’s hope he doesn’t further hurt it. The man needed a break before the injury.