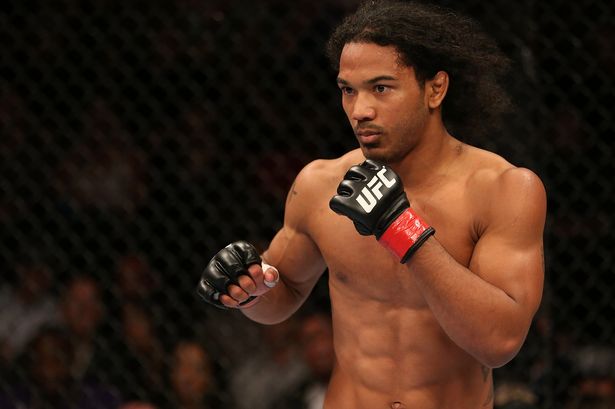 Benson Henderson signs with Bellator after the UFC declines to match the offer.

In a bit of a surprise, Benson Henderson has signed with Bellator. It was thought that the UFC would match any offer for Henderson after his contract expired, which would keep him under their umbrella.

Spoke w/ @danawhite, who said he declined to match @BensonHenderson's @BellatorMMA offer. "He's a great guy, and we wish him all the best."

On Henderson’s website, he discussed “the move” to Bellator.

I’d like to officially announce my move over to Bellator MMA. I’m beyond excited for this next phase of my career, it’s a big move, like any move when switching employers or jobs after having worked somewhere for such a long time.

I have to thank the BigMan upstairs for putting some amazing people in my life, my wife (first and foremost) and a lot of truly smart and insightful people behind the scenes who helped make the connections and negotiated this deal to bring it to fruition.

I’d be remiss to not thank Dana White and Lorenzo Fertita for the opportunities they presented me, you guys have helped me change my life for the better and to be able to provide my family with the things I didn’t have while growing up. For that I’ll always have the utmost appreciation. Thanks for all the advise you guys gave too, both business wise and personal.

And last but not least, to who it is I think of when I think of the UFC! Everybody behind the scenes who I personally dealt with every time I reported in or had to do something. Mayra, Melissa, Dave, Chris, Nick, Tracy, Joanie, Maura, Tony, Heidi, Ryan, James, Dave, Kaia (sp.???), Burt, Rob, Rudy, Stitch, House, Mike, Susie, Dean, Donna, Feryal, Sean, Joe, Brad, Jazzmine, Candice, Michelle, Reed, sorry I can’t name everyone or this list would go on for forever. There’s a whole ton of people behind the scenes who make that show what it is. You guys and girls are the ones who make that show great and allow us fighters to do what it is we love!!! Much love to you all and thanks for putting up with me for so long.

To my fans, thanks for all the love and support, I’ll keep giving you my all, opening up my heart and soul inside that cage. I’m excited for this next chapter and building new relationships with guys I’ve heard nothing but great things about like Scott Coker, Rich Chou and Mike Kogan.

Below, you can read Bellator’s press release.

SANTA MONICA, Calif. (February 1, 2016) – Bellator MMA President Scott Coker continues to make good on his commitment of adding value to the Bellator roster, as he and the promotion are pleased to announce the signing of former UFC Lightweight Champion Benson Henderson (23-5) to an exclusive, multi-fight deal. The signing was scheduled to be announced today on “The MMA Hour,” which is hosted by 6-time MMA Journalist of the Year, Ariel Helwani. When news of the signing broke earlier than anticipated, the flood of traffic to the website may have been responsible for technical difficulties causing some of the interview to not stream live; However, the interview will be available in its entirety this afternoon at www.mmafighting.com.

Henderson has accomplished a great deal over the course of his 10-year professional career as a mixed martial artist. A former WEC and UFC lightweight titlist, “Smooth” holds black belts in both Taekowndo and Brazilian jiu-jitsu, and also earned NAIA All-American honors in both 2005 and 2006. Multiple media outlets named Henderson the fighter of the year in 2012, and has been a part of several epic battles that have received “Fight of the Year” accolades: Donald Cerrone (2009), Anthony Pettis (2010), Frankie Edgar (2012), and Brandon Thatch (2015).

“Benson is a tremendous athlete who puts forth an exciting effort each and every time he steps into the cage,” said Coker. “Whether he chooses to fight at lightweight or welterweight, he’s without question a great addition to this promotion, and brings countless amazing matchups to the table. We’re looking forward to having him put on a show for the great Bellator MMA fans that tune into Spike. We plan on announcing his Bellator debut in the very near future.”

Having competed at both lightweight and welterweight, there are plenty of enticing potential matchups in Henderson’s future. Bellator’s lightweight division is currently championed by Will Brooks, and features many of the world’s best including: Michael Chandler, Josh Thomson, Marcin Held, Brandon Girtz, Brent Primus, Derek Anderson, and Melvin Guillard. Meanwhile, Andrey Koreshkov sits atop the welterweight division with studs the likes of Paul Daley, Brennan Ward, Michael Page, Josh Koscheck, Douglas Lima and Chris Honeycutt vying for his gold.

Monday MMA Round-Up: Charles Oliveira is still the best lightweight in the world