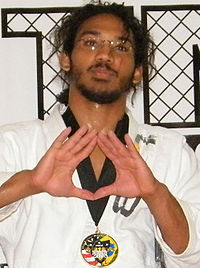 That sure didn’t take long. With the signing of Benson Henderson, Bellator all of a sudden has someone with star power who isn’t either a gimmick, or someone terribly past their prime. While Henderson may not at the top of his game, he’s still very close to it.

He’s 2-0 in his last two fights, including beating Brandon Thatch in his UFC welterweight debut in 2015, less than one month after losing to Donald Cerrone in a close three-round fight.

He’s been on UFC TV for nearly five years and has a nice fanbase who will follow him to watch him fight. So putting him in an immediate title fight is probably the right move.

He will face current champion Andrey Koreshkov at Bellator 153 on April 22.

SANTA MONICA, CALIF. (February 2, 2015) – On the heels of what is one of the biggest free agent moves in mixed martial arts history, the man at the center of the shift, Benson Henderson (23-5), now has a debut date.

Today, Bellator MMA is pleased to announce that “Smooth” will compete for welterweight gold against current champion Andrey Koreshkov (18-1) at the newly announced “Bellator 153: Koreshkov vs. Henderson” card on April 22 from the Mohegan Sun Arena in Uncasville, Conn.

Tickets for “Bellator 153: Koreshkov vs. Henderson” start at just $30 and go on sale this Friday, February 5 at Bellator.com, Ticketmaster.com and the Mohegan Sun Box Office. A special presale offer for Bellator Nation members will be available starting Wednesday, February 3.

“Bellator 153: Koreshkov vs. Henderson” airs live and free on Spike at 9 p.m. ET/8 p.m. CT, while preliminary bouts will stream live on Bellator.com and The Bellator Mobile App. Additional contests will be announced in the coming weeks.

Henderson has accomplished a great deal over the course of his 10-year professional career as a mixed martial artist. A former World Extreme Cagefighting and Ultimate Fighting Championship lightweight titlist, “Smooth” holds black belts in both Taekowndo and Brazilian jiu-jitsu, and also earned NAIA All-American honors in both 2005 and 2006. Multiple media outlets named Henderson the fighter of the year in 2012, and he has been one half of several epic battles that have received “Fight of the Year” accolades: Donald Cerrone (2009), Anthony Pettis (2010), Frankie Edgar (2012), and Brandon Thatch (2015).

The Glendale, Az., resident has shown that he can compete at both 170 and 155-pounds and few have done so as frequently as Henderson. Since his MMA debut in 2006, there’s only been one year where the MMA Lab-competitor has fought less than three times in a calendar year. If that’s any indication of what to expect, 2016 could be huge for the 32-year-old.

Standing opposite of Bellator MMA’s newest acquisition will be Koreshkov, a 25-year-old fighter out of Russia who took the title from Douglas Lima during a main event bout at “Bellator 140: Lima vs. Koreshkov” in July of last year. With only one defeat on his impressive resume, “Spartan’s” first title defense will likely put him in the position of underdog, a spot that champions rarely find themselves heading into a matchup. With 13 finishes in 18 victories, the 10-fight Bellator MMA veteran will attempt to stop a fighter who has only lost by knockout or submission three times in 28 outings.