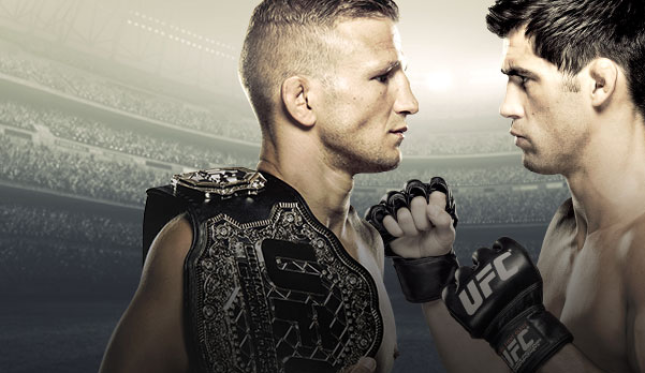 Check out our Dillashaw vs Cruz play by play.

I really believe that this fight should’ve been a semi-main event on February’s PPV, but it looks like the UFC wants to take advantage of the NFC playoffs and make the January Fight Night a big one.

The semi-main and main event should be classics.

Trinaldo is throwing a lead left, which opens him up for Pearson to throw his right, but Pearson hasn’t timed him well yet. Trinaldo is also throwing a lot of head kicks, though only landed one cleanly. Still, he’s the more active guy and got a big slam takedown at the end of the round.

Pearson got a nice takedown early in the second, but Trinaldo pushed him up against the cage and lit him up with knees and punches. Pearson countered with an uppercut. Trinaldo landed some body kicks and is attempting a lot of kicks which leave him vulnerable, but Pearson doesn’t follow up. So far through two, Trinaldo is up. This is a really good fight.

Trinaldo is still the aggressor, but Pearson caught a kick and took him down. On the ground, Pearson couldn’t do anything and Trinaldo was able to get up. Trinaldo is slowing down a bit and playing defense. Pearson is trying to cut the cage off, but he’s also tired and unable to.

One judge had it 29-28, but the other two had it as a clean sweep for Trinaldo.

Mitrione is measuring him as Browne seems a bit longer than him. Browne is using a lot of kicks to keep Mitrione at bay. Mitrione is trying to find a way to get inside so he can throw his left hand. He’s only throwing one shot. He dove in and landed one, but Browne also landed a counter. Mitrione dropped him, but Browne was back up. Mitrione dove into Browne, but was poked in the eye and had to run away so the referee could call time out.

Mitrione came out aggressively and caught Browne again. It looks like Mitrione was thumbed in the eye this time, but he tried to continue, though he couldn’t open his eye. Finally, the referee called another timeout. At some point, Browne needs to be warned. Browne used the unfortunate issue with Mitrione to his advantage. Mitrione was clearly frustrated. Browne caught him and used a trip takedown.

Browne secured a big takedown and got the full mount on Mitrione who couldn’t do much from the bottom. His eye was swollen from the pokes and he was taking a beating. It was stopped on the ground.

Winner: Travis Browne by way of 3rd round TKO

Mitrione’s eye is grotesque. The grotesqueness came from a right hand and not necessarily from the eye pokes.

The only crime here is that this isn’t a five round fight. Pettis grabbed a guillotine early. Alvarez is trying to shorten the space and pushes him up against the cage. Pettis is trying to keep the distance with body kicks. It’s a grind game versus a standup game.

Alvarez is pushing the pace again and pushes Pettis back into the cage. Pettis gets off and is doing a good job at keeping the distance. Pettis is countering easily, but just with single shots that aren’t hurting Alvarez, but are scoring punches. Alvarez grabbed him again and Pettis tried throwing him, but wasn’t able to.

Alvarez tried to close the distance again and did so, but Pettis soon started taking over with punches and bloodied Alvarez. He tagged him with several shots and then Alvarez got a takedown. He was in Pettis’ half guard and Pettis attempted a heel hook. Pettis got up and then was put back down again. They both closed strong on the feet. It’s quite possible Alvarez gets this decision.

This was a very even round. Cruz is elusive, but I don’t think he’s as quick as he’s been in the past. Dillashaw looks like he’s close to landing some big shots, but he needs to figure out the timing. Cruz moved out of the way of two shots and blasted Dillashaw, but didn’t seem to really move him. He probably wins the round ever so slightly with that shot, but it does look like Dillashaw is close to landing big punches.

Maybe Dillashaw isn’t timing him. It seemed that Cruz was more elusive in that round, though, he had a bad sequence in which he took two shots. But he then went to his wrestling, taking Dillashaw down twice. He couldn’t keep him down as Dillashaw was simply too strong, but I have Cruz winning the second as well.

Dillashaw landed more shots in this round and they actually looked to take something out of Cruz. But Cruz stayed with his style, making Dillashaw miss big and then had the best flurry of the round where Dillashaw looked like he was going to set something up, but couldn’t because Cruz tagged him multiple times. He also caught him with a takedown again.

Dillashaw landed two huge shots including a leg kick. He finally stunned him a bit, but Cruz came right back with a fast combination. Cruz looks hurt from the leg kicks as he’s switching his stance, but he’s still hard to hit. Dillashaw was able to bully him near the end to take the last round as well. I have Cruz winning, but I’m not sure about that third round.