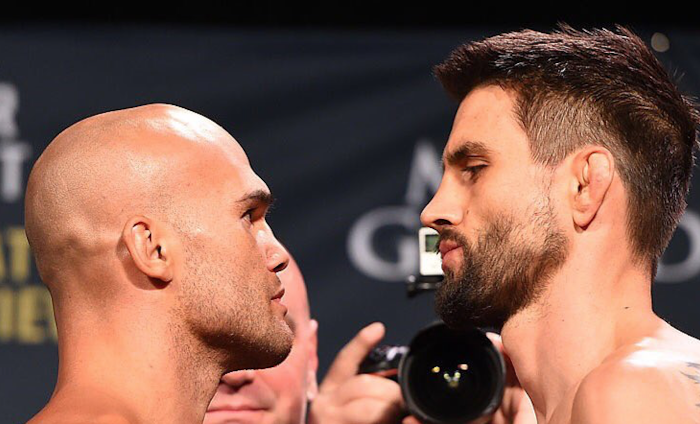 Check out our UFC 195 live coverage – Lawler vs Condit.

The second or third fight most were looking most forward to when it came to this card, Dustin Poirier vs Joe Duffy, was the main event on Fight Pass. Poirier won a clear decision in a very competitive and bloody fight. Duffy had Poirier locked in a triangle when the bell rung to end the fight.

We’ll be back with live play by play of the main card in a couple hours.

Sims looked good early. He was changing stances and moving a lot. He was actually winning the striking battle. But he shot in for a takedown, Trujillo grabbed on a guillotine and Sims had to tap out.

Winner: Abej Trujillo by way of 1st round submission

Brandao looked really good in the first. He didn’t blow himself up and stayed fairly calm. The fight went to the ground early and Brandao wanted it back up. There’s still a sense that Ortega is waiting to take advantage of a mistake, but Brandao clearly won the first round.

Brandao is telegraphing his big punches based on how hard he feints. But it hasn’t mattered yet. He pulled that round out as well, though Ortega hung in there better on the feet. He used his jab to keep Brandao on the defensive, but then started to let Brandao lead the exchanges again, which is where he’s landing best.

Ortega sure did sucker us all there for a second. Brandao started throwing big shots and got excited. Ortega went for a takedown, but Brandao landed on top. Ortega was looking for a submission, but Brandao wanted it back on the feet. He then forced Brandao down again with a guillotine, transitioned to a triangle, and then Brandao had to tap out.

Winner: Brian Ortega by way of 3rd round submission

Larkin is using leg kicks and buckling Tumenov’s front leg. Tumenov caught Larkin with a flurry near the cage, but Larkin took it. Larkin continued to kick the front leg. It was a pretty close striking battle.

Tumenov was digging with left to the body and Larkin was just eating it, much like Tumenov was eating Larkin’s front leg kick. Tumenov’s boxing looks like actual boxing rather than MMA striking. It was a brutal round for both guys, though Tumenov should win the second.

Tumenov changed his stance to southpaw and Larkin’s way to attack the leg was to do a spinning heel kick that was able to reach the back leg. This definitely looked more like Larkin’s round. Tumenov wasn’t nearly as active in round three. We’ll see who won round one in the judge’s eyes.

Miocic landed one big shot and Arlovski wobbled. He followed up quickly and landed a right and left to drop Arlovski. Arlovski fell on all fours and took a few more shots before it was stopped.

Condit looked really good in the round. He knocked Lawler backward with a short punch and pushed him down. Lawler was stunned but not hurt. Condit’s length is frustrating Lawler. Lawler’s output was low.

It took one punch to turn the tide of this fight. Condit tried to come inside and Lawler knocked him down with a right hand. He followed him to the ground but got back up. From the outside, Condit is doing well. When he tries to get inside, Lawler takes control.

This is a tough round to score. Lawler’s power shots had much more in them and Condit looked more spent. But Condit was the more active fighter and finisher strong, mostly with kicks. When he lunged forward, he payed for it.

That was Condit’s best round. Lawler was put down with a kick and then nearly put down with a left hook. Lawler landed a big shot late, but he’s simply not throwing enough. He needs a knockout.

This is one of the greatest rounds in the history of MMA. Condit didn’t retreat and continued to come forward. He had Lawler reeling. Then Lawler came back and threw all he had. Condit was on wobbly legs but didn’t go down. They both were killing each other all the way until the final bell.

I thought Condit was going to win the decision and it turned out to be bad strategy to go out swinging the way he did.