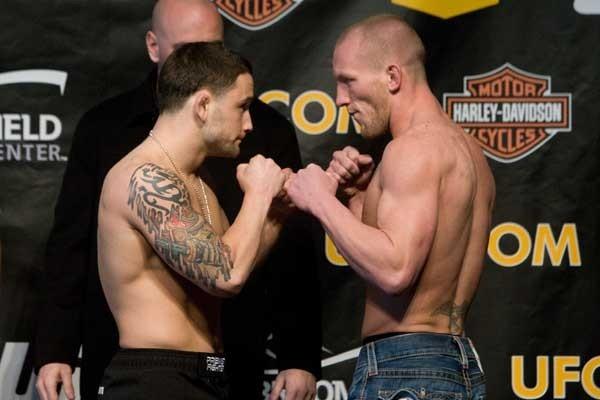 The PeachMachine is back to re-score Edgar and Maynard from UFC 125.

This fight is listed at number one in the top 10 five round fights at sherdog.com. I know we just did an Edgar fight, but he lost that one to Aldo, and that was before he became first in line to fight the great Conor McGregor for the strap at 145 lbs.

This was the rematch of their 2008 fight, which Maynard won by unanimous decision, and Edgar’s second defense of the 155 lb. title, which he won from BJ Penn at UFC 112 in 2010. This match was an instant classic.

Round 1: Maynard tagged him hard a bunch of times and nearly finished him, but didn’t, and it was the right call not to stop the fight, because Edgar is made of IRON (Fe). 10-7 Maynard, and not 10-6 because Edgar was on his feet most of the round and connected some.

Round 2: This round was all Edgar. He recovered well and came out with some impressive footwork that easily won him this round. Add to that a massive takedown slam. 10-8 Edgar.

Round 3: Edgar connected a bunch early in the round, and then later it was Maynard tagging him into a big takedown. He took Edgar down but didn’t do anything with it. I scored that round even 10-10.

Round 4: Frankie nearly cinches up the guillotine early, and then takes Gray down. Now back on the feet, both men look tired. Edgar put him on the cage and landed three hard shots right to the jaw. A mortal man would have cried. 10-9 Edgar.

Round 5: Couture is in Maynard’s corner and offered some great advice, “Go get that fucking belt!” Not much happening in the first two minutes. I would love to see these two just wrestle. Edgar stuffed every takedown attempt. I have this round even with one minute to go. Yep. Even round. 10-10.

So the dissenting rounds were 3 and 5, both of which I scored even, which makes sense. At least all three judges scored round 1 a 10-8.

Media decision: The majority of the media scores were 47-47.

Final thoughts: Man, what a disappointing yet correct decision. Both guys think they won. Rogan looks weird with hair. Edgar is obviously disappointed, as is Gray. This was the right decision, and a great way to end my True Ten adventures, as my scorecard matched the outcome. Gray thinks he won rounds 1, 3, and 5, which he could argue, but not if the judges used my True Ten formula, and actually gave 10-10’s.