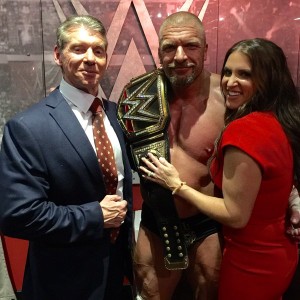 Pro wrestling news dominated the week, but some big and unfortunate UFC news happened as well.

Firstly, we wanted to pay our respects to the families of Archie Gouldie and Iron Mike Sharpe who passed away.

If you missed it, Duan and I recorded the latest Fabulous Four podcast on the fantastic Marvin Hagler and Thomas Hearns fight from 1985.

– Shayna Baszler will take on Colleen Schneider in a pro wrestling match for Premier.

– Brian Pillman’s daughter speaks and doesn’t have nice things to say about his widow.

– Triple H was at Evolve this weekend with Gabe Sapolsky.

– The Young Bucks tweeted out the Bullet Club curtain call.

– Kevin Owens doesn’t think Tough Enough Josh (or now Bronson) is his peer after Josh made fun of the Social Outcasts, calling them jobbers. He then blocked him on Twitter and said this:

Let him LOL. People like him fizzle out by themselves pretty quick anyway. https://t.co/VkdJQeVEBo

– The UFC show after the NFL Playoffs must be a yearly thing now.

– Joanna Jędrzejczyk and Cláudia Gadelha are the coaches for the new season of Tough Enough. Somehow, I don’t think this one will do fantastically in the ratings.

– Might Juan Manuel Marquez and Miguel Cotto be a possibility?

– Keith Thurman and Shawn Porter are set to fight on CBS in March, and no, this isn’t a PBC fight. It’s a Showtime Boxing fight.

– Amir Khan will forever take Ls with Mayweather and Pacquiao.

I haven’t finished the entire show from Saturday Night, but Ronda is getting better reviews than I expected. During her monologue, they didn’t give her a ton of things to do, but it was probably for the best. I need to watch the skits she was in, but I didn’t find her to be too nervous or terribly out of her league.

She also congratulated Holly Holm in her monologue.

Ghost Guerrero looked good early on, but Garcia was able to figure it out and won the fight in the later half. By winning the fight, he won the vacant WBC welterweight title which was left vacant by the retirement of Floyd Mayweather.

All the judges had it 116-112 for Garcia and most of the scores that I saw were in that neighborhood. However, I did see some closer scores toward Guerrero, possibly from giving him most of the early rounds.

Danny Garcia stays undefeated and is now 32-0. Guerrero is now 3-3 in his last six fights.

3. Jim Ross is the new voice of New Japan on AXS.

MSL and Kevin Sullivan may have jumped the gun by a few days, but Jim Ross has signed on to be the voice of New Japan Pro Wrestling on AXS TV. I know that when Mauro Ranallo joined WWE, Ross was my first guess as to who was going to get the job. But I wondered if his asking price may have been too big. It doesn’t look like it.

He went on Wrestling Observer Radio to talk about the deal with Bryan Alvarez and Dave Meltzer. The show is free and a really good listen. 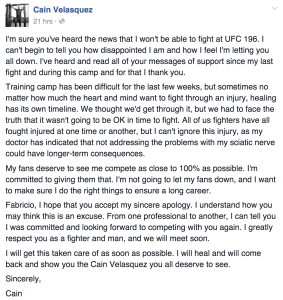 2. Cain Velasquez and Fabricio Werdum are both out of UFC 196.

In really unfortunate news for everyone involved. Velasquez had to pull out of his fight in two weeks against Fabricio Werdum for the heavyweight title. Stipe Miocic was to step in on short notice to face Werdum in the main event.

Since then, Werdum also pulled out of the fight, citing injuries as well.

Since beating Brock Lesnar at UFC 121 in October of 2010, he’s only fought six times in just over the five year span. He’s only faced three men (Junior Dos Santos 3X, Big Foot Silva 2X, and Werdum) in the six fights. Injuries are always going to be an issue, especially for someone who trains as hard with he does, in a gym that pushes their athletes as hard as AKA.

You can read his message to his fans on the right.

We’ll have to wait for Dana White to tell us what the plans are and what the new main event is.

It was expected that Triple H would come out on top as the WWE World Heavyweight champion. With the recent injuries to top stars, it made the most sense that if Roman Reigns was going to go through someone to finally win the top prize on the biggest stage, he would do it against the biggest star left not named The Rock who is available.

But I did have an issue with the way it happened. Had Triple H done a dastardly deed and heeled his way to winning, it would’ve put the sympathy back on Roman Reigns, who they’ve been spending the last year to get sympathy on. Instead, they threw away a lot of the good work they’ve done with him of late. Triple H came in like a tornado and ran through their two top babyfaces in Reigns and Ambrose. And after throwing out Reigns, he crotch-chopped like a manic, which is the ultimate “cool heel” move.

This is not to say that it wasn’t fun to see. The show was good and it definitely felt like a kickoff to WrestleMania. But I think Triple H could’ve handled this in a much better way considering the main issue with the company right now is that their day-to-day stars don’t feel like stars because of how they are written. In that case, this is a possible step backward.

If you missed the show, you can read our recap. Jason Hagholm, John LaRocca, and I discussed the show on the latest episode of FGB Radio.