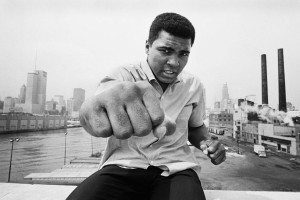 – It was rumored that WWE was going to release Daniel Bryan. But WWE said it wasn’t true, according to Dave Meltzer.

– Yoel Romero failed his drug test according to USADA, which could put his number one contender status in jeopardy.

– Cyborg confirms what we all thought; she’s never making 135. She then whipped ass again.

– BJ Penn hooks up with Greg Jackson. Unfortunately, it looks like it might be to fight again.

– The next episode of the Fabulous Four Podcast will be out this week talking about Hagler vs Hearns. Last week, we wrote about Hagler’s fight against Mustafa Hamsho which was right before the Hearns fight.

– Deontay Wilder defended his title with a 9th round knockout. Check out the video on Showtime’s Facebook page.

– As promoted on both NFC playoffs and UFC programming, PBC is on Fox this weekend with Danny Garcia facing Robert Guerrero.

5. CM Punk has an opponent.

There really should’ve been a reality show around this one. CM Punk’s opponent will be Mickey Gall, provided he beats Michael Jackson on the undercard of UFC 197. However, if the King of Pop beats Gall, he won’t get the shot.

Punk will be in attendance for the fight.

The finding of Gall is a main plot point of White’s new YouTube reality series called, “Looking For A Fight.”

While the guy didn’t deserve a five year suspension, he sure has 9 lives. Diaz’s suspension was reduced to 18 months, which means that he should be able to fight later in the summer, though will miss UFC 200 for sure.

There is a risk in putting him in a big fight, especially one with title considerations, because he doesn’t seem to care all that much about passing his drug test. I’m sure he’ll be whining about a title shot soon enough. Just watch the wolf tickets, Nick.

3. Shinsuke Nakamura was stripped of his IC strap.

Rather than have him drop the belt to Kenny Omega, New Japan stripped Shinsuke Nakamura of his Intercontinental title.

New Japan must’ve felt like him losing the belt was too predictable for their fanbase, but even then, Omega beating Nakamura in a predictable manner seems like it would be huge for Omega to cement him as the new leader of the Bullet Club.

It can’t be that WWE didn’t want Nakamura to drop the title because Nakamura is still under contract to New Japan until the end of the month.

Ronda Rousey’s filming of Road House is being pushed back according to Dana White (via Kevin Iole) and thus, she won’t be available for UFC 200. While it’s not good for the UFC, it’s probably good for Ronda who is going to be busier than ever this year and needs some real movement training if she’s going to want to beat Holly Holm anytime soon.

UFC 200 is still in good shape as long as Conor McGregor is fighting on the card. But it is a risk if he’s not ready after his fight in March at UFC 197 against Rafael Dos Anjos. If McGregor and Rousey are out, they better hope that Georges St-Pierre makes his rumored comeback.

By the way, remember Ronda’s phrase that picked up some steam, making fun of DNBs, or Do Nothing Bitches? Um, it’s being made into a movie with Tina Fey.

Though I wasn’t surprised that he did it, I did think that TJ Dillashaw’s athleticism would be too much for Dominick Cruz, coming off his multiple injuries. But how great did Cruz look? He looked so great that not only did he beat Dillashaw, but he looked unbeatable in the division for the time being. And he did it with an injured foot.

I had Cruz winning the first three rounds, but only one decisively and had Dillashaw winning the last two rounds decisively. So it was really rounds one and three for me that were up in the air and could’ve gone either way.

Do we see a rematch? Do we see Urijah Faber get the next title fight? Do we see Dillashaw and Faber fight next?