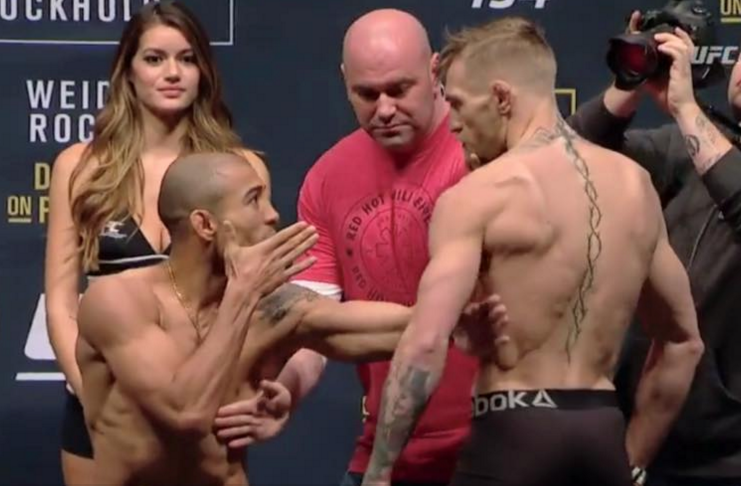 This is final show of three UFC nights, starting with the Paige and Sage show on Thursday, last night’s Ultimate Fighter finale, and tonight’s UFC 194, which we previewed yesterday.

We’ll be back with coverage of the main card and possibly the prelims main event. See you then.

This was a rough first round for Faber, even though he may have won the round simply by landing more shots. Saenz is physical and not falling for a lot of Faber’s feints and shots. He landed a nice uppercut that took something out of Faber.

Faber blasted him right out of the gate. Saenz flew back against the cage and Faber landed 20 or more elbows and knees, but may have tired himself in the process. He got a judo-style takedown and landed in crucifix position, but Saenz tossed him like he was Brock Lesnar. Faber looks spent. Saenz actually looks like the fresher fighter after taking all that crazy punishment. I don’t know that Saenz did enough to win the round, but what a comeback. Round three may not be too kind for Faber.

Round three was very close. Saenz was landing his right hand and Faber didn’t see it coming often. Faber landed some punches of his own and then Faber got a takedown. Saenz wasn’t down for long, but Faber got another takedown late. Saenz tried to grab onto a heel hook at the buzzer. Whatever the score is, Frankie Saenz fought his ass off.

Holloway took the second as well. He’s more elusive and when Stephens has to pull the trigger, Holloway has a counter shot ready. He landed two or three really nice shots.

Stephens’ corner was calling him to throw big punches, knowing that he was behind. Whenever he went for a takedown, they screamed at him to stop. He had better success on the feet in this round, but Holloway still had the harder shots as the counter puncher.

One of the judges gave Stephens one round.

Excellent ground work by both guys, with Maia getting the better of it. Nelson was a step behind on most transitions, but he held his own and made sure to not get submitted by an armbar late.

Maia was riding Nelson, throwing punches from the top, trying to open up the opportunity for a rear naked choke. He had him in a body lock, so when Nelson finally rolled out of it, Maia still had the body lock on. Maia wore him out. Nelson looks defeated.

More of the same from Maia. He just owned the guy on the ground. This wasn’t a very aesthetically pleasing fight, but what it did show is that Maia’s jiu-jitsu is still awesome, including what he can do from those positions. He battered Nelson with elbows from all the dominant positions.

That was Romero’s round. After half a round of nothing, Romero threw a wild kick that didn’t connect and then followed up with a spinning back fist that put Jacare down. Jacare got Romero to come to the ground, but he couldn’t grab a hold of him. He took a lot of punishment on the ground. He was woozy getting up.

The second round was much slower. Romero held onto the cage and allowed Jacare’s momentum to pull him down, only to then roll over on top. The referee saw him hold the cage and made them stand up. The rest of the round was boxing and Jacare landed more shots. I have it even at one, though, you could’ve given Romero a 10-8 first.

As you’d expect, Romero is getting tired. Jacare landed some punches against the cage, setting up a takedown. Romero had stuffed or avoided his other shots. But he was too tired to defend and Jacare took him down and is landing hard ground and pound. With 10 seconds left, Romero escaped and was back on his feet.

Weidman jumped on Rockhold’s back and rode him. Rockhold tried to dump him, but Weidman was locked on him. Weidman got another takedown, but Rockhold got up quickly. Weidman is roughing him up against the cage. Rockhold grabbed a guillotine, but didn’t have the best position. Herb Dean stood them up even though Rockhold still had his arm under his chin. Back on their feet, Weidman went for another takedown, but Rockhold rolled through and grabbed another guillotine.

Rockhold blasted him to start the round. He’s landing big left kicks and may have taken something out of Weidman. Weidman can’t pull the trigger. His corner is screaming at him to do something. This is an easy Rockhold round.

What a domination by Rockhold at the end of the round. Weidman started out strong, but near the end of the round, Weidman went for a risky kick, Rockhold took him down, got the mount and just laid waste to him. Weidman took way too many shots on the ground. Herb Dean gave him the benefit of the doubt, but it could’ve been stopped. Weidman tried defending himself and Dean let it go. He took quite the beating.

The fourth was much like the third. Rockhold got Weidman down and was pounding him. Dean finally stopped it.

Winner: Luke Rockhold by way of 4th round TKO

Daniel Cormier and Cain Velasquez came into the cage to congratulate him.

Winner: Conor McGregor by way of 1st round TKO