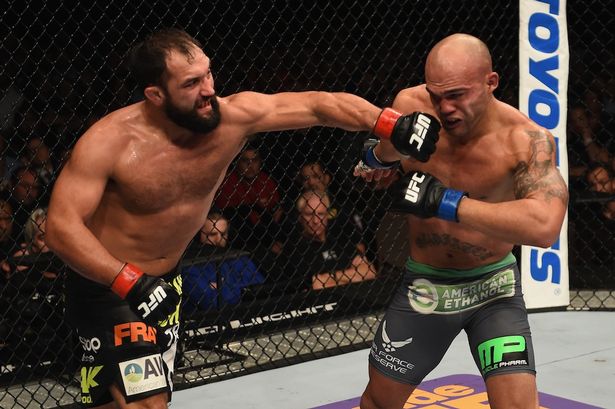 The PeachMachine is back to re-score Hendricks Vs Lawler 2 from UFC 181.

This event was supposed to be headlined by a middleweight championship bout between Chris Weidman and Vitor Belfort, but an injury to Weidman’s hand got the bout postponed. So for the UFC’s 300th event, we were treated to a rematch of one of the best welterweight championship matches in history; a rematch of the same match we looked at last week.

Round 1: Hendricks pressed Lawler against the cage for almost three minutes. Then on the exchanges, Hendricks got the better of it, and finally took Lawler down again to finish the round on top. Hendricks 10-8.

Round 2: Half way through the round and Hendricks finally takes down Lawler again and starts to grind him out. Lawler is looking frustrated as he tries to get back to his feet. Now Lawler looks to make him pay for that annoyingness. Pretty close round, with Lawler falling on a kick at the end, but I’d have to say that Hendricks wins the round 10-9.

Round 3: Even through the first two minutes of action until Hendricks starts really coming forward. Lawler has not done much this round as Johny keeps throwing first. With 90 seconds left, Johny takes Lawler down again. Now back on the feet with one minute to go. Johny grinds out another take down at the end of the round. Hendricks 10-8.

Round 4: Not much action until Johny again runs Robbie into the cage and goes for a takedown. Herb separates them. Johny is landing again. Lawler starts coming back. Now we get some big kicks by Lawler. Hendricks gets another takedown, but this time in the middle of the cage. Back on the cage, Lawler is starting to do damage from the stuff position. Lawler pounded him from the top, but I don’t think he did enough to win the round. 10-10.

Round 5: We end up back on the cage as Lawler tries to do some damage and prevent the takedown. Dean separates them and the action continues. Both men are throwing heavy hands. Lawler is busier, and Johny dives in for another takedown. The last two minutes of the round was Johny grabbing on to the leg of Lawler, as Lawler reigned down. The last 20 seconds was how Robbie should have been fighting the whole match. 10-8 Lawler.

Overall Analysis: In my opinion, and on my scorecard, Johny Hendricks won this fight. Nearly all the media outlets had it 48-47 for Hendricks, and I remember watching this fight live thinking that there is no possible way Lawler won. Well, I guess I was wrong. Hopefully we’ll get the rubber match if Lawler is still the champ, and Hendricks can get his weight under control.