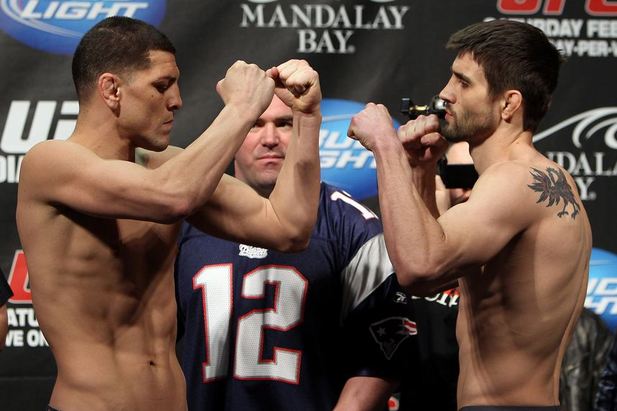 The PeachMachine is back to re-score Diaz vs Condit at UFC 143.

On the heels of a successful return to the cage for Nick’s little brother Nate, and on the verge of Carlos Condit’s octagon return on January 2, I chose this controversial match up from a few years ago to rescore. Diaz of course believed he won, but we will see…

Round 1: Diaz is already talking to him. This was a very close round, and dare I say even. Diaz pushed forward and connected a lot, but so did Condit. 10-10.

Round 2: I just don’t understand the Diaz brothers’ fighting philosophy. I get that they talk trash, but if they’re so good on the ground, why do they rarely attempt takedowns? This was all Diaz this round as Condit looked confused. 10-9 Diaz. I don’t know how anyone gave that round to Condit.

Round 3: Diaz won this round in my book. He pushed forward and connected. Condit connected with a lot of counters and had some good kicks, but when it looks like you don’t want to engage it’s tough to score it for you. I have this round barely for Diaz again at 10-9.

Round 4: Diaz needs to fight in the smaller octagon only because it’s harder to “box” guys in the 30-foot cage. Condit won this round frustrating Diaz with his footwork and avoision. “I don’t say evasion I say avoision.” – Kent Brockman (a.k.a. Kenny Brockelstein). 10-8 Condit.

Round 5: Condit’s game plan was superior. He used excellent counter punch combos to keep Diaz at bay and frustrate him. It’s amazing to me that we can see 25 minutes of exchanges and not a single knockdown and then we can see McGregor KO a guy in 13 seconds. The human chin is an anomaly. Diaz took Condit down and worked to secure a sub in the final minute. I don’t think that won him the round as we sometimes see, especially since Condit peppered him with shots and escaped. 10-9 Condit.

So Kamijo was the odd man out with dissention in rounds 2, 3, and 5.

Media decision: The majority of the reporting media outlet scored it 48-47 for Condit, with a few 49-46s and only one for Diaz.

Final thoughts: If Condit fights this same fight with Lawler he’s a dead man. Lawler punches much harder, and is more aggressive. He won’t let Carlos dance away. Carlos may have won the interim welterweight championship here, but he never really won the strap as he lost his next tilt in the UFC to GSP. However, I’m still looking forward to Lawler vs. Condit on January 2 for the UFC welterweight title, which I still consider the interim belt, since GSP never lost and he WILL be back.