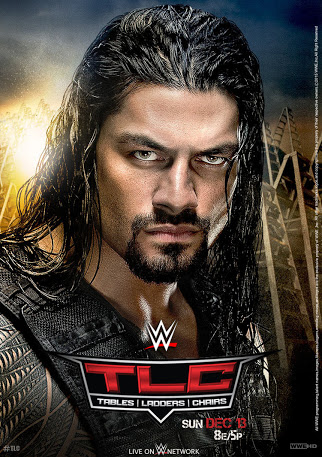 After last night’s UFC show where Conor McGregor knocked out Jose Aldo in 13 seconds, it’s going to be hard for WWE to follow it up. However, the way they can do so is simply to have a smart show with smart outcomes.

Roman Reigns and Sheamus is already a dead feud and it looks like they’re going to need to get through this show and the next show unless they switch the belts early. But there are some darkhorse matches. The Triple Threat Tag Team Ladder match has a chance to be really fun. Also, Dean Ambrose vs Kevin Owens should be excellent, if giving enough time.

They are going all out here. There are some super crazy spots including Sin Cara doing a senton over the top rope and onto a ladder which was perched on both Usos.

Big E also did a spot where he was underneath the ladder and both Lucha Dragons were going up the ladder. He bench pressed the ladder and Sin Cara flew off while Kalisto then dove onto both Usos who slammed him.

The Lucha Dragons performed their move where Kalisto is catapulted into a front flip onto one of the New Day who was underneath a ladder.

Kalisto did his Salido Del Soul to one of the Usos off the top of the ladder and onto a ladder perched between the ropes. It was ridiculous.

Xavier Woods saved the titles. He threw the trombone at Kalisto who was climbing the ladder and then Kofi Kingston threw him off the ladder. Kofi then climbed up to grab the belt.

After Ryback’s comeback, Rusev rolled out of the ring. Ryback chased him out and Rusev pushed him into Lana. Lana took a bump, though Ryback didn’t really believe it. He still looked over at her and Rusev hit him with a kick. Lana started to cackle. Ryback rolled him into the ring and got a two count to their surprise.

Rusev tried the Accolade, but he couldn’t get it. Ryback went for the Shell Shocked, but Rusev got out of it. He then hit Ryback with a kick to the back of the head and put him in the Accolade. Ryback didn’t submit, but he passed out.

This is a chair’s match which means tons of plunder. They started swinging chairs right from the get-go. Swagger is so underrated. Swagger hit the Swagger bomb and then the Patriot Lock, using the chair to enhance the lock, I guess.

Del Rio pulled off an armbar over the top rope, used some chair shots and then did the double foot stomp off the top onto Swagger who had chairs underneath him.

The Wyatt Family Vs Rhyne, Tommy Dreamer, and the Dudley Boyz

It’s a tables elimination match meaning that you are eliminated from the match when you go through a table. Strowman was about to spear Bubba Ray through the table that was perched in the corner, but Bubba got out of the way and Strowman’s foot went through it. But he didn’t get eliminated.

The Dudley’s put Rowan through the table with a 3D.

Luke Harper hit a big boot on Rhyno who went through the table.

Devon was setting up a table and Bray spider walked up and gave him a Rock Bottom through the table.

Harper did a tope, putting Dreamer through a table.

Bubba Ray was trying to set the table on fire, but the Wyatt’s triple teamed him and Strowman put him through the table.

Ambrose won the match after Owens tried to do a Pop Up Powerbomb and Ambrose did a hurricanrana into a roll up.

Earlier in the match, Ambrose hit the Dirty Deeds and Owens grabbed the ropes in a killer spot.

Ambrose is the new Intercontinental champ.

Charlotte is doing Flair spots. She did a Flair Flop and then went outside and sat down screaming, “Whoa, whoa, whoa!”

She also took off her knee pad to drop a knee on Paige and then did the strut. Paige is mocking Flair a ton wooing. Paige put Charlotte in the Figure Four.

Charlotte got some nearfalls, but then tried a spear and ran into Paige’s knee. Paige went for the Rampage and Ric put Charlotte’s foot on the ropes to break the count. Charlotte took off the middle turnbuckle. Paige came toward her and she pulled Paige toward the turnbuckle, knocked her out, and got the pin.

This is a TLC match.

There have been Cena and Rollins chants so far. There isn’t a whole lot of heat for this match. Lots of plunder early on. Sheamus did the White Noise to Reigns off the steps and through a table and you got a feeble, “Holy sh**” chant. It was so quiet.

These guys are killing each other trying to get a reaction. Sheamus teased doing his rolling thing with the guy on his shoulders onto one of the ladders. But Reigns turned into into the MMA spot where someone fights out of the armbar by using the powerbomb. And yes, he powerbombed him on the ladder.

Reigns had Sheamus on his back and fell backward, splitting the ladder in half.

Reigns nearly broke his leg falling off the ladder. Sheamus then went to the top and Reigns caught him with a Superman punch.

The League of Nations came in and Reigns had to fight them all off. Sheamus Brogue Kicked Reigns and grabbed the belt and retained the title.

Wade Barrett wasn’t out with the rest of the guys. Dean Ambrose never came down. Rusev and Del Rio put Sheamus on their shoulders, but Reigns came back with a vengeance and gave everyone chair shots. Triple H came down to the ring, telling him to stop, but he kept nailing Sheamus.

Finally, Reigns hit Triple H with a Superman punch and then with the chair. Stephanie was screaming. Reigns followed him outside and and tried to powerbomb him through the table, but it didn’t break. Then he dove off the other table with an elbow to break the table.

Triple H started walking with help but was selling it big time. Then Reigns walked up the ramp, decided to turn back, picked up steam and speared Triple H out of his boots. That was lethal.