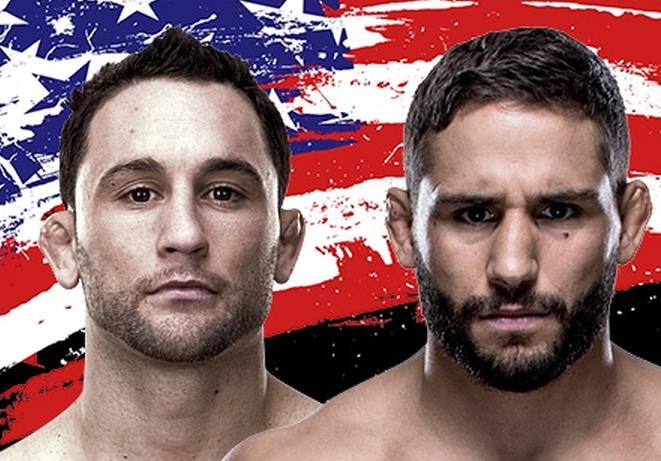 We have live coverage of the main card for tonight’s Ultimate Fighter finale.

We’ve made our predictions on the main event to this card , along with our picks for tomorrow’s UFC 194.

Five of us think Frankie Edgar wins while two believe Chad Mendes gets the W tonight.

In the actual TUF finale, Artem Lobov faces Ryan Hall who replaces Saul Rogers who had visa issues. What a time to have visa issues.

Erosa won the first round. He had Wrzosek in a choke, but Wrzosek had great defense. It looked deep, but he was calm in getting out. The striking leaves a bit to be desired as it’s more on the sloppy end.

Wrzosek had a much better round, especially on the feet. He hit Erosa a couple times that made Erosa’s head turn. Lots of pushing each other up against the cage.

Wrzosek realized Erosa was the more tired fighter. Wrzosek had more bounce and went for takedowns, but Erosa was landing punches with his longer reach. Both guys went after it late. Whoever gets the last round wins the fight. Erosa may get it for strikes in the last round.

Knight used his rubber guard early, but it didn’t work well as Kawajiri was able to lay in shots repeatedly.

More of the same in the second as Kawajiri is just too strong. Knight is bloodied and exhausted.

The third round was more of the same. Kawajiri was just too strong and Knight, coming in on short notice, didn’t really have a chance. It was a terribly boring fight.

That was a strong round for both guys, but surprisingly Dunham may have won the round. Lauzon set the pace, but Dunham countered well, including landing a nice uppercut. He also had Lauzon lunging at the end.

I expected Lauzon to pick up the pace here, but Dunham is the one landing the combinations and not overreaching. Lauzon isn’t the same fighter with the frenetic pace. Maybe it’s Dunham who is slowing him down. Both guys are bleeding.

This was Dunham’s best round. He was coming right down the pipe with both hands and landing. Lauzon looked terrible near the end with his face all busted up. This is an easy one for Dunham.

They were both on the ground and Ferguson kicked Barboza right in the face. John McCarthy had to take a point away from him. Barboza looked woozy and the doctor was asked to check on him. Barboza is such an accurate striker, but Ferguson closes the gap a bit by being so active and moving forward. I’m still not sure Barboza is 100%. Round was close, but Ferguson loses a point on the deduction.

Ferguson opened up a cut with an elbow on Barboza. There’s blood on Ferguson too, but I can’t tell if it’s a cut on his face or if it’s Barboza’s blood. He may be cut too. These guys are throwing all kinds of shots with ill intentions. Ferguson had a chance and dove at Barboza, hooking in a D’Arce. With all that blood, it’s probably slippery. He got the submission anyway.

Winner: Tony Ferguson by way of 2nd round submission.

Hall took his back quickly and sunk in a rear naked choke. It looked like Lobov was going out, but he patiently got out. Hall still has his back though. He has his body figure foured. Lobov couldn’t do anything with Hall and had to take the L on the round. He better not get in that position in round two.

Lobov tried to keep it on the feet and Hall was doing decently there, landing a nice kick. But it was obviously not where Hall wanted to be. Hall was able to get Lobov into his guard twice in the round and had a heel hook attempt.

Hall is all over him like a cheap suit. He jumped on his back and Lobov couldn’t shake him. It was almost as if Lobov was paralyzed. He couldn’t fall back, flip him over, or anything. He just had to stand there with Hall hanging on him. What a weird way to end the fight.

He got two 10-8 rounds, which had to have been for the first round.

It wasn’t exactly how I figured this to go in that it was much faster than I thought, but Edgar timed Mendes, landed a left hook following a right and Mendes went down and was out on his feet for a second. John McCarthy stopped it. Mendes was actually doing a good job with nasty leg kicks. But Edgar was timing him on the feet and Mendes’ defense standing is suspect.

Winner: Frankie Edgar by way of 1st round TKO