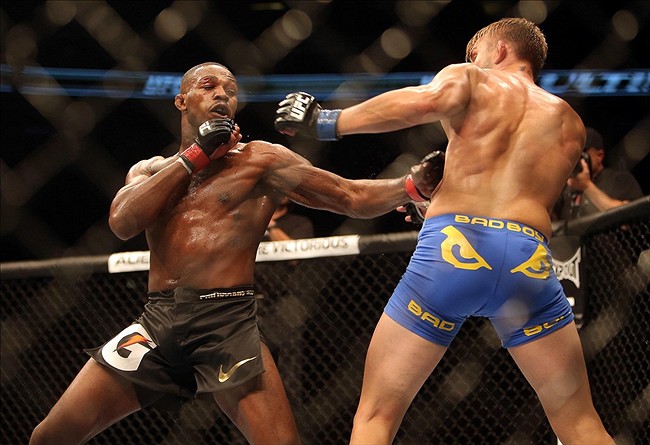 The PeachMachine is back to score Jon Jones’ greatest challenge; Jones vs Gustafsson.

Round 1: Gustafsson got the better of the exchanges, cut Jones, AND took him down for the first time ever! Then stuffed Jones’ takedown! Amazing. Gustafsson 10-8.

Round 2: This was a much more even round as Jones connected with some really good kicks and elbows. Gustafsson has stuffed six takedowns by Jones so far. This round was a slight edge for Jones but not enough to take the round. 10-10.

Round 3: Gustafsson landed a lot and so did Jones. It’s always amazing to me that guys can withstand hundreds of punches and not go down, yet sometimes it only takes one. This was another really close round, with maybe a slight edge for Gustafsson, but not enough, so I’m giving it another 10-10.

Round 4: Rogan thinks Jones is losing. So do I, but not by much. Jones took the round at the end, but early on Gustafsson was tagging him. Jones hurt him pretty bad, so I gave it 10-8 Jones.

Round 5: Both men are bleeding as Jones’ eye is a mess and Gustafsson’s ear or something is busted. This was Jones’ round as he landed a bunch and Gustafsson held it together but didn’t do much. 10-8 Jones.

Nearly every media outlet scored it for Jones.

Overall Analysis: I don’t think Gustafsson did enough to win this fight. He came close, but faded at the end. Would anyone be upset if Gustafsson and Jones had a number one contender match to see who faces DC? I doubt it, but it won’t happen. Could you imagine the outrage if Jones lost this fight? He certainly was in a fight, but did not lose. However, all that needed to happen would have been two judges giving the third to Gustafsson, which very easily could have occurred. I’ll keep saying this, but my scoring system avoids those sorts of things. Since I did not have to flip a coin in rounds 2 and 3, I was able to fairly score the fight as a whole, and the correct man won. Why is this so difficult?