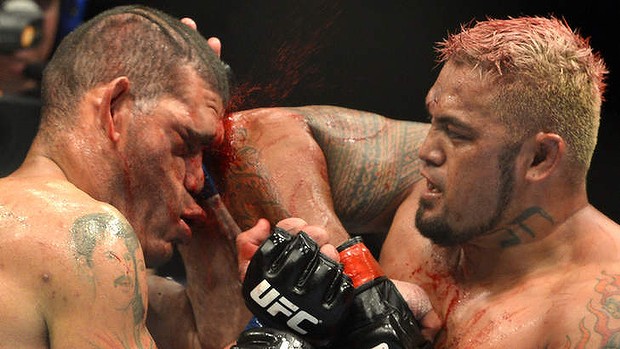 The PeachMachine is back to re-score the greatest majority draw ever (?), Hunt vs Bigfoot.

Given that we are now about 48 hours before the biggest crowd ever is going to watch a live UFC event, which will take place in Australia, with one of the physically biggest rematches ever in Mark Hunt vs. Bigfoot Silva, it’s time to take a look at their first match.

Round 1) Silva drops him midway through the round. Not much action, and a lot of feeling out. Silva’s round 10-8.

Round 2) More of the same, but I give Silva a slight edge here scoring with some nice kicks, and score it 10-9 Silva.

Round 3) I can’t help but wonder why all fighters completely ignore their corners. Hunt comes out and starts head hunting then shoots for a takedown, which was the opposite of what his corner was saying. At about the mid-point of this match, I can’t remember why this fight was so awesome. Hunt is now starting to land, and drops Silva. Now I remember. Hunt is just smashing him and landing some ground and pound. This was a dominating round for Hunt, so I score it 10-7 Hunt.

Round 4) Now this is starting to pick up. Hunt is imposing his will at this point. Landing strikes and now a big take down, Silva is getting smashed again. Back on the feet and both guys are landing monster blows. Silva is teeing off! Huge rally! Bigfoot lands on top and starts delivering some ground and pound. These guys are tired. Silva is in full mount and slamming hands. Silva’s round 10-7.

Round 5) Amazing that these two come out for the fifth. Who would have thought this would go 25 minutes? Hunt’s blonde hair is now red. Hunt comes out dropping bombs! This fight definitely shortened these men’s careers. Do not watch this match to learn defense. Hands down, head hunting, and Hunt is dishing out the leather. Bigfoot is too tired to even sell these punches. The ref stops the match to check out the cut over Silva’s eye. Why? That’s such a dumb rule. The fight, miraculously, ends with both men on their feet. 10-8 Hunt.

Overall Analysis: I don’t see how they the fifth a 10-8 round for Hunt. Both men did a ton of damage and neither really came close to a finish. I scored it a 10-8 in my system, but that’s a 10-9 round in the Ten Point Must system. I’m glad this ended in a draw, but I believe Silva won this fight. In fact, nearly all of the media had it for Silva. I feel like a majority draw should not even exist as a decision. If two judges have it a draw, shouldn’t those cancel each other out, and thus the fighter with one decision should win. I know why that’s not the case, but doesn’t it seem like it should be that?

This fight received the Fight of the Night Bonus. After this fight, Silva failed a post-fight test for elevated testosterone (even while using UFC approved TRT). Due to this failure, Hunt received all $100,000 from the fight bonus, and the bout is a draw on his record. Silva had the result changed to a No Contest. Man, that sucks for Hunt, minus the 100 grand. I’m really looking forward to Saturday with these two again.